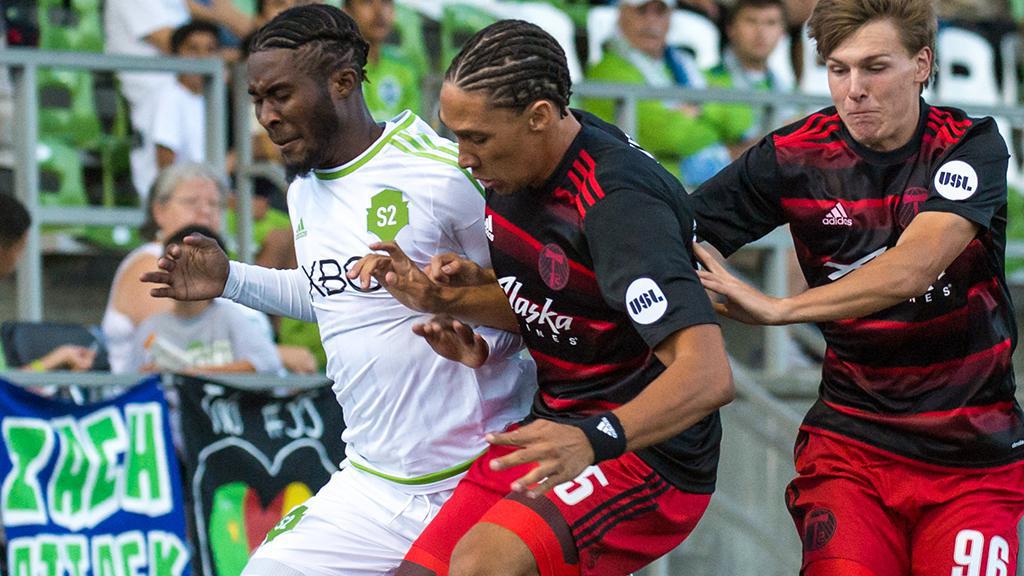 TUKWILA, Wash. – Jordan Schweitzer scored the winner with two minutes to go as Seattle Sounders FC 2 took a 2-1 victory against the Portland Timbers 2 on Monday night at Starfire Stadium. S2 almost grabbed an early lead when Portland goalkeeper Kendall McIntosh denied Carlos Patino, and Mark O’Ojong had a shot slip through McIntosh’s hands and come back off the crossbar nine minutes later. Seattle remained on the front foot, but Portland also hit the crossbar in the 26th minute as Villyan Bijev hit a fine shot from the edge of the penalty area that came back off the woodwork. S2 took the lead seven minutes into the second half when Zach Mathers converted from the penalty spot after Patino was brought down looking for a return pass in the penalty area. Bijev threatened again with a fierce shot that was saved by Tyler Miller in the 58th minute, while Irvin Parra shot just wide for S2 with 18 minutes to go. T2 got back on even terms in the 76th minute as Victor Arboleda sent a low finish home off a pass by Bijev. S2 grabbed victory when the game appeared set to finish as a draw with two minutes to go, however, as Tony Alfaro’s low cross was turned home by Schweitzer’s first-time finish.