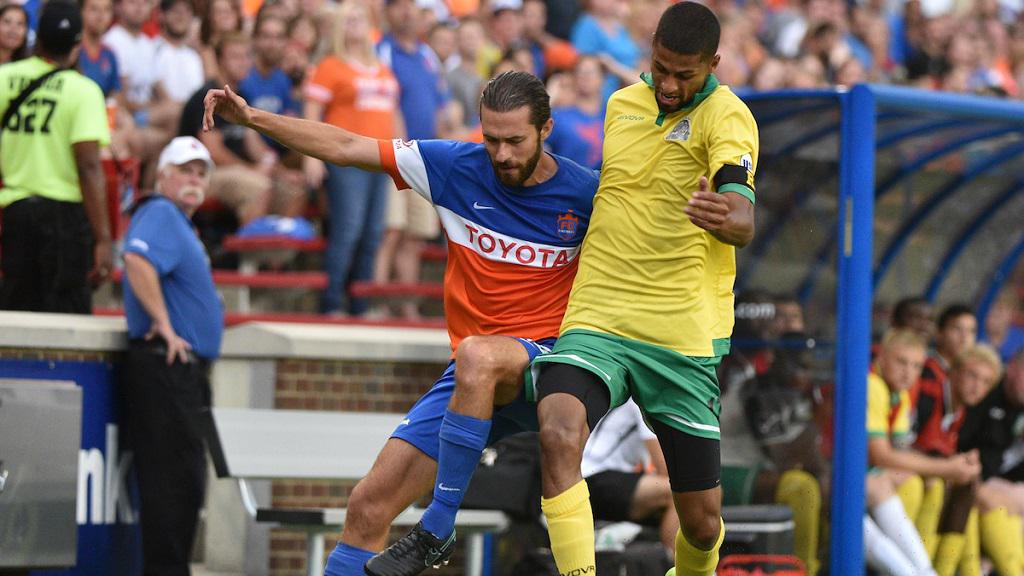 CINCINNATI – The opportunity to clinch a spot in the 2016 USL Playoffs was there for the taking, but ultimately FC Cincinnati’s time will have to wait as it played to a 1-1 draw against the defending champion Rochester Rhinos on Wednesday in front of a crowd of 14,157 at Nippert Stadium. A Cincinnati win combined with a Wilmington Hammerheads FC draw or loss to the Pittsburgh Riverhounds would have lifted the expansion side into the postseason. Pittsburgh did its part with a 4-1 victory against Wilmington, but Cincinnati could not hang onto its one-goal advantage against Rochester. Defender Austin Berry tallied a 28th-minute goal for Cincinnati while Rochester responded with a Steevan Dos Santos score 13 minutes later. Wednesday’s game also marked the 13th consecutive match in which more than 10,000 tickets have been sold during Cincinnati’s first USL campaign. Cincinnati moves to 12-4-7 (43 points) overall and 7-2-4 at home, extending its unbeaten streak to five games (2-0-3). Rochester is now to 10-5-10 (40 points) overall and 2-3-7 on the road, in the midst of a four-game unbeaten streak (2-0-2). This was the second and final regular-season meeting between the two teams. Rochester won the first matchup 2-1 on July 6 at Rhinos Stadium.

USLSoccer.com Man of the Match:
Austin Berry, FC Cincinnati - The Cincinnati native, who made an impression at the start of the season with a pair of early goals, stepped up into the attack Wednesday for a solid header to give his side a first-half advantage against Rochester.