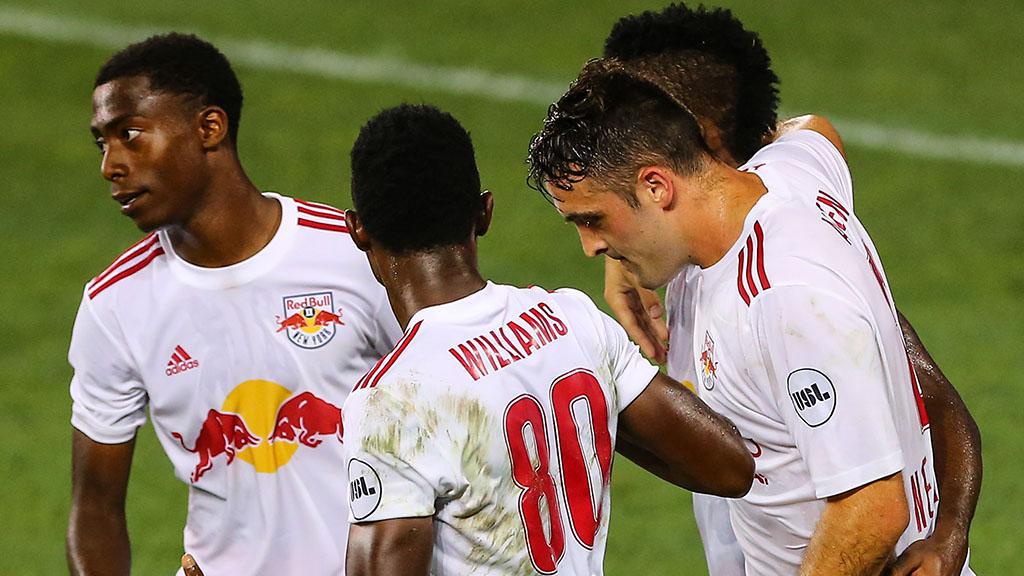 TAMPA, Fla. – The first two berths in the 2016 USL Playoffs are claimed, and Rio Grande Valley FC continues its surge up the Western Conference. Here’s what we learned from Week 22 in the USL:

1. INSIDE TRACK: The New York Red Bulls II became the first team to book their place in the 2016 USL Playoffs on Friday night, and with their 1-0 victory against Louisville City FC also gained the inside track to claim the USL regular season title as they opened up a three-point lead on Louisville with two games in hand on their closest rival. New York shaded a tightly-fought game thanks to Brandon Allen’s penalty kick, and now will lead the side north of the border as it looks to extend its lead with a visit to Toronto FC II on Wednesday.

2. BACKDOOR IN: Despite the loss, Louisville City FC is also bound for the postseason as both Wilmington Hammerheads FC and Bethlehem Steel FC failed to take the victories they needed to prevent City clinching its spot. There were some positives to take from Friday’s game for the side, too, with a much-improved start to the contest seeing Louisville have the better of the first half. The side will now need to try and get Chandler Hoffman and its attack going again, with City’s standout striker now goalless in his past six appearances.

3. GRANDE RECORD: Rio Grande Valley FC continued to surge up the USL standings this week with another pair of shutout victories to move into third place in the Western Conference, just a point back of Sacramento Republic FC and Vancouver Whitecaps FC 2, and set a USL record in the process. With eight consecutive shutouts, the Toros now hold the longest shutout streak in league history, a 568-minute streak set by the Rochester Rhinos at the start of the 2012 season. With the Toros’ attack continuing to click, RGVFC could be the team to beat when the playoffs arrive in the Western Conference.

4. UP THE REPUBLIC: Another team that will lay claim to that status is Sacramento Republic FC, which notched back-to-back four-goal games with its 4-0 win against the Portland Timbers 2 on Saturday night in front of 11,569 fans at Bonney Field. Sacramento needed some sharp goalkeeping from Evan Newton in the first half to keep the side ahead after Mike Da Fonte’s early goal, but the side eventually proved irresistible offensively as the trio of Tommy Thompson, Cameron Iwasa and Danny Barrera came to the forefront again in an impressive victory.

5. WFC2 GETS PAYBACK: Trailing by a goal, and up by a man, things still didn’t quite seem as though they were going to go Vancouver Whitecaps FC 2’s way on Sunday afternoon. Then, a six-minute hat trick by Thomas Sanner spurred WFC2 back into a tie for first place with Sacramento as the hosts took a 3-1 victory against Arizona United SC. After a five-game winless streak that included the roles being reversed for WFC2 when it visited Arizona earlier this month, the victory could prove a cathartic one as the side remained in a tie for first place at the end of the weekend with a home-heavy schedule down the stretch.

6. ENERGY SHOT: OKC Energy FC was looking to jolt its attack to life after being held scoreless in four consecutive contests entering Saturday night’s Black Gold Derby with Tulsa Roughnecks FC at ONEOK Field. In Timo Pitter’s seventh-minute blast from 25 yards, it got just that, as the early goal paved the way to a comfortable victory for the side. OKC will need more of the same if it’s to get into the conversation for top spot in the West at the end of the season – and faces a big challenge on Wednesday night as it visits Colorado Springs in the USL Game of the Week on ESPN3 – but with games in hand on all of the teams above it, the opportunity is there for the taking.

7. KING OF THE CASTLE: Like OKC, San Antonio FC entered the weekend looking to take advantage of its games in hand in the competition. Thanks to Rafael Castillo’s lone goal against Seattle Sounders FC 2 on Saturday night at Toyota Field, the host did just that to complete a two-win week that vaulted the side into eighth place in the Western Conference standings. San Antonio’s path gets no easier from here on, with its next four games against Saint Louis, Swope Park and Arizona – all of whom now sit just below SAFC in the standings – but all a team wants at this stage of the season is positive momentum, and SAFC appears to have found it.

8. DRAWN OUT: San Antonio was able to claim the eighth spot for now thanks to another 1-1 stalemate between Missouri rivals the Swope Park Rangers and Saint Louis FC. Saint Louis has now drawn three of its past four games – with the other contest a 4-3 loss to Sacramento – as it saw a victory grabbed away thanks to Akeil Barrett’s late goal for the Rangers on Sunday night. The Rangers could see the point as a plus, given the circumstances, but with two draws in the past three games, there have been missed opportunities here too to cement a place in the top eight.

9. DIVIDED WE FALL: While Swope Park and Saint Louis both took a point over the weekend, Arizona United SC’s week couldn’t have gone much worse. In the playoff positions last Monday, and on a three-game winning streak, United seemed to have the wind at its back. Two defeats that saw the side concede three goals in each – particularly Sunday’s late collapse in Vancouver – now has the side a point behind San Antonio having played one game more.

10. RHINOS RAMP UP: The Rochester Rhinos got a pair of goals from an unlikely source on Saturday night with midfielder Sofiane Tergou scoring his first two goals of the season in a 3-0 victory against the Pittsburgh Riverhounds. Rochester has now taken two wins out of its past three games as it prepares for a big midweek contest against former player Pat McMahon and FC Cincinnati on Wednesday night. A win would move Rochester level on points with the newcomer, and could open up the chance for bigger opportunities as it battles for playoff position in the middle of the Eastern Conference contenders.

11. NEVER SAY DIE: Given its position in the standings, there isn’t much for FC Montreal to play for, with the battle to avoid finishing at the bottom of the Eastern Conference against Pittsburgh about all there is left, but you can’t tell that from the effort the side has given in recent weeks. Montreal could easily have succumbed to Bethlehem Steel FC on Sunday afternoon in miserable, rainy conditions, but instead its comeback 3-2 victory showed there are still signs of life in the club’s youngsters, and gave them a three-game winning streak for the first time since 12 months ago.