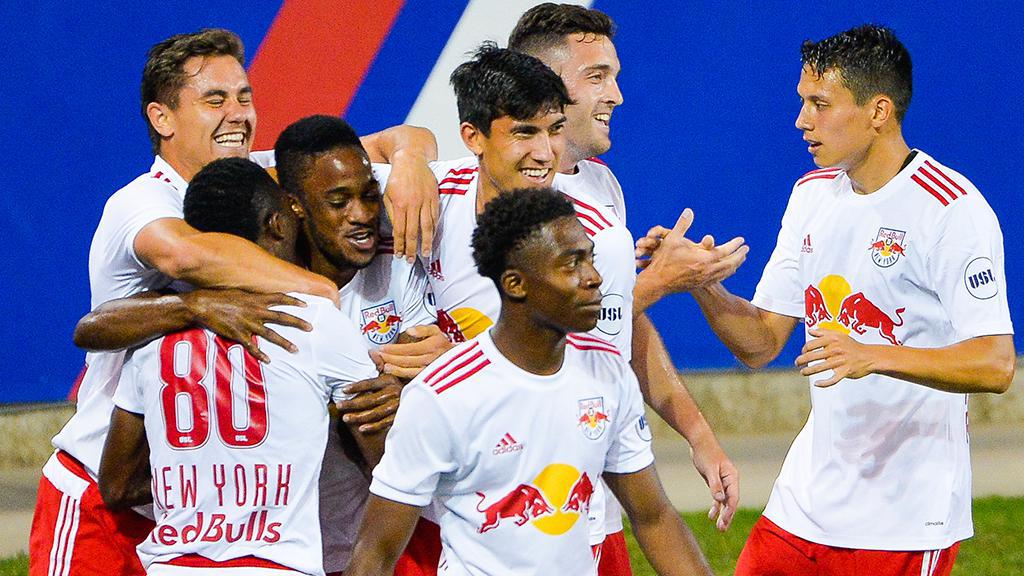 During the course of a season, it can be pretty easy to get caught up in the here-and-now of weekly results. That’s obviously something that occurs here on a weekly basis, as we try to figure out which teams are hot and which are not at this point of the season.

Sometimes, though, it can be important to take the wider view in terms of what a team has been able to accomplish in terms of progression from one season to the next. Because it might be flying a little under the radar how far the New York Red Bulls II – this week’s top-ranked team – have come in a very short space of time.

Last season, the Red Bulls II were great to watch, but not necessarily great enough to be a true title contender. They conceded 45 goals in the regular season – while scoring 46 – and while they got past Pittsburgh in the opening round of the playoffs, it was going to take a major upset to down Rochester, and the Rhinos prevailed.

Fast-forward a season, and the Red Bulls II have maintained their attacking prowess – Brandon Allen has already set a new team record for goals in a season with his hat trick on Saturday – but has added the sort of defense that will make life very difficult for opponents down the line. As everyone looks for progression and the mythical “next level”, the Red Bulls II are the embodiment of what happens when a team learns, evolves, and grows into a title contender.

1. New York Red Bulls II (Previous: 4)
Last Week: W 4-2 at FC Montreal
The Red Bulls II romped to a victory in Montreal, continuing their outstanding road form this season while closing the gap on Louisville at the top of the standings. While the side’s defense was breached twice for only the second time this season, New York is looking primed to try and avenge its only defeat of the season against Charlotte this weekend before a massive game against FC Cincinnati on ESPN3.

2. Vancouver Whitecaps FC 2 (Previous: 5)
Last Week: Bye
Vancouver had the week off, and saw all of the teams below it in the Western Conference falter as its cushion remained a comfortable three points. This week will provide a test for WFC2 as it visits Rio Grande Valley and San Antonio, but given the team’s strong road form so far this season, it’s feasible to see the side come away with something from both games.

3. Louisville City FC (Previous: 1)
Last Week: D 1-1 vs. Charleston Battery
Louisville conceded late against Charleston, but the concern coming out of Saturday’s game was the lack of zip and fluidity the side played with in comparison to previous outings. The Battery pressed Louisville, and were able to force loose passes in a first half that saw City fail to register an official shot. A visit to Wilmington, which does the same things the Battery did rather well, should be no walk in the park on Sunday evening.

4. LA Galaxy II (Previous: 6)
Last Week: Bye
Much as with Vancouver, LA will have enjoyed its week off as it retained a solid position in the West thanks to slip-ups by Sacramento and Colorado Springs, both of which failed to take advantage of their chance to overtake Los Dos. A visit to Portland is up next.

5. FC Cincinnati (Previous: 3)
Last Week: L 2-1 at Rochester Rhinos; W 2-1 at Saint Louis FC
While Cincinnati’s undefeated streak came to an end, the side rebounded very nicely to take a victory at Saint Louis on Saturday night and maintain its third-place position in the Eastern Conference. Cincinnati is a team that is prepared to go toe-to-toe with anyone in the league, and after this weekend’s exhibition against Crystal Palace, a compelling meeting with the New York Red Bulls II in the USL Game of the Week on ESPN3 should draw a big crowd, and wide audience.

6. Charleston Battery (Previous: 7)
Last Week: D 1-1 at Louisville City FC
Charleston grabbed a point in Louisville after putting in maybe the best defensive display City has faced this season. The Battery pressed, and made life in general difficult for their hosts, and might have offered a blueprint for teams moving forward that want to challenge Louisville head-on. Now they return home to MUSC Health Stadium with a little revenge on their mind, as Orlando City B returns for the USL Game of the Week looking to replicate its win in Charleston earlier this season.

7. Sacramento Republic FC (Previous: 2)
Last Week: L 3-2 vs. Real Monarchs SLC; D 3-3 at Orange County Blues FC
Going into the week’s action, Sacramento had only conceded 11 goals this season. Coming out, the defensive fragility Paul Buckle’s side showed against the Monarchs and Blues must be a concern as his side prepares for a visit to Colorado Springs this weekend. Maybe it was a blip, and Republic FC will return to form after a week of training, but the Switchbacks will definitely want to test the back four early and often as they look to turn around their own downturn in form.

8. Rochester Rhinos (Previous: NR)
Last Week: W 2-1 vs. FC Cincinnati; D 0-0 vs. Orlando City B
The Rhinos secured a strong win against Cincinnati on Wednesday night, but didn’t seem quite in-sync on Sunday against Orlando as they managed only two shots on target. Rochester needed a victory in that contest to try and bridge the gap between itself and the top four, as securing a home playoff game could be crucial to its hopes of defending its title.

9. Wilmington Hammerheads FC (Previous: NR)
Last Week: W 2-1 vs. Charlotte Independence
Back-to-back victories have the Hammerheads back in the playoff positions, and after what appears now to have been a blip in New York two weeks ago, the side is getting back to using the speed that brought it success in a four-game undefeated streak prior to that contest. Wilmington has gone 4-1-2 since May 29, putting itself in strong position to make a return to the postseason.

10. Orlando City B (Previous: 10)
Last Week: D 0-0 at Rochester Rhinos
A point on the road saw Orlando slide out of the playoff positions, and now it faces a crucial week of action as it visits Charleston on Wednesday for the USL Game of the Week on ESPN3. This side appears to have the quality to be in the top eight at the end of the season, but needs to find a way to start earning wins again with draws in three of its past four contests.