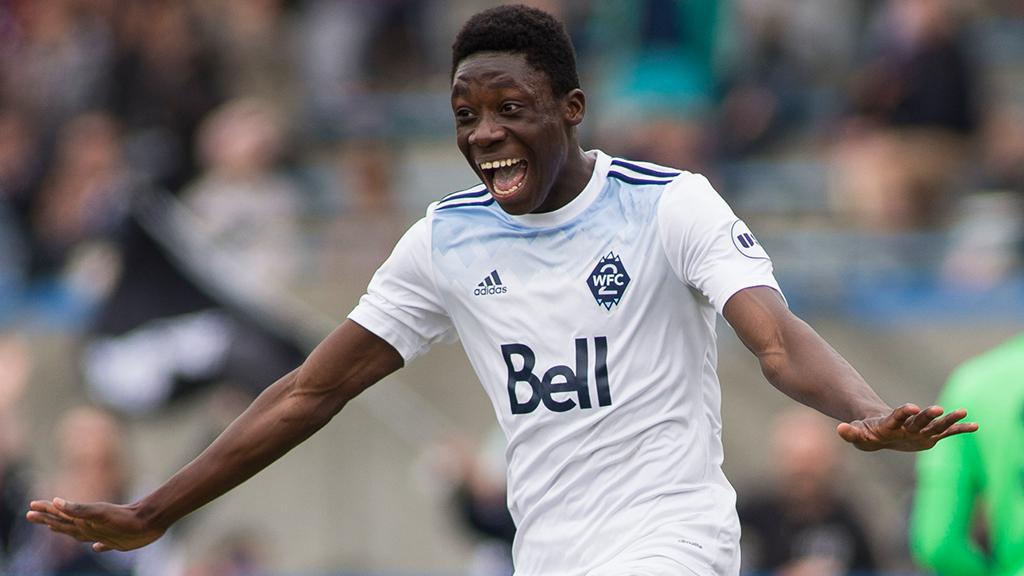 VANCOUVER, B.C. – A week ago, 15-year-old Vancouver Whitecaps FC 2 player Alphonso Davies made his debut for the Whitecaps’ MLS side in the first leg of the semifinals of the Canadian Championship.

On Wednesday night, he made the most of his first start for the side, as Vancouver took a 3-0 victory against Ottawa Fury FC at B.C. Place to claim a 3-2 aggregate victory and advance to the final against Toronto FC.

Despite his age, Davies – who scored his first professional goal for WFC2 against the LA Galaxy II last month – definitely didn’t look out of place alongside his more experienced teammates. In fact, he came close to claiming his first goal for the Whitecaps with a beautiful stepover move and shot that came back off the right post.

“My coaches were telling me before the game, take him on one-on-one,” Davies told TSN following the game. “If you have a one-on-one, go at them, shoot, do what you know. So I did what I know, hit the post and unfortunately it didn’t go in.”

With seven regular-season appearances for WFC2 under his belt, Whitecaps Coach Carl Robinson said he felt the time was right to give Davies a chance with the MLS side. Following the game, Robinson was quick to try and slow the excitement over the performance, while understanding that excitement all the same.

“He did OK,” Robinson said with a wry smile to reporters. “He’s one of a number of younger kids that we’ve got that we think have got incredible potential, but it’s potential. It’s only players that have potential that don’t fulfill it.

“I wanted to give Alphonso a chance because I thought he was ready, and he didn’t look at all out of place out there, so all credit to him. I know his mum and dad and coach will be very proud of him.”

Ottawa Coach Paul Dalglish was more open with his praise, with the former Austin Aztex Coach bullish on Davies’ potential.

“He’s a real, real exciting talent,” Dalglish said. “He’s brilliant, for 15 years of age to do that. At 15, I couldn’t even look people in the eye. And he’s going out and taking men on, and looking absolutely magnificent.”

It’s almost a given that WFC2 will remain Davies’ home for at least the remainder of this season, if not for a while, as he builds his professional career. But on Wednesday night, as he received a standing ovation from the crowd of 17,863 at B.C. Place, it was clear the experience will be one he will carry for a while.

“Yeah I really enjoyed that,” Davies told TSN. “The atmosphere was great. They cheered me on, and were behind me the whole way.”