Crowd of 10,745 Sees Patience Pay Off For Republic FC

Sacramento gets back on winning track against Monarchs at Bonney Field 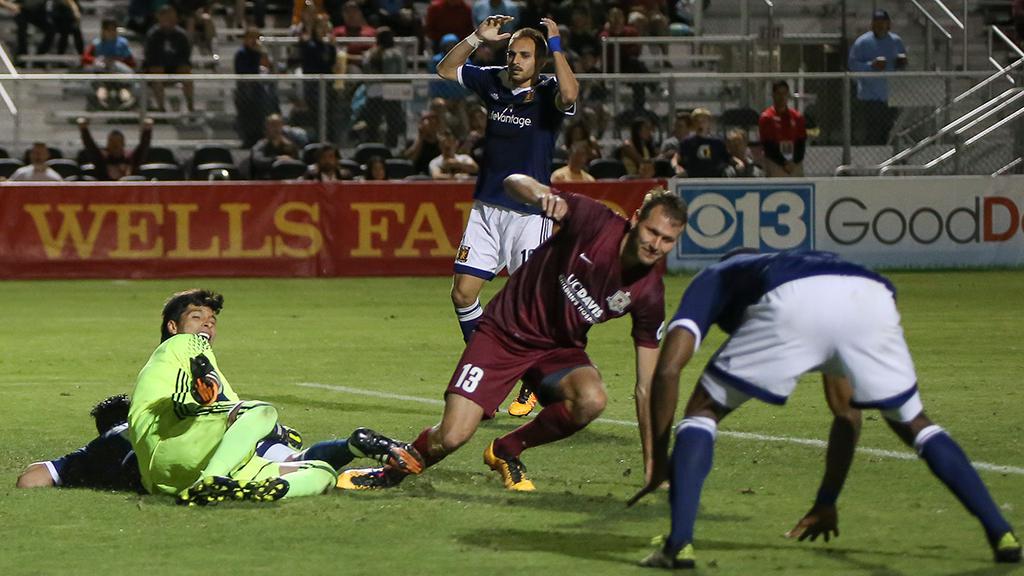 SACRAMENTO, Calif. – With the game scoreless at halftime despite his side having recorded five more shots than the visiting Real Monarchs SLC in the opening 45 minutes, and a crowd of 10,745 fans at their backs, Sacramento Republic FC Coach Paul Buckle believed his side’s patience would be rewarded.

“I said let’s remained disciplined and the chances will come,” Buckle said following Wednesday night’s game. “I was sure we’d score from a cross.”

Buckle’s foresight proved accurate, as just two minutes into the second half a low delivery from the left by James Kiffe found Adam Jahn as he drove through the six-yard area, and the San Jose Earthquakes’ loanee’s deft finish proved the difference in a 1-0 win at Bonney Field in the USL Game of the Week on ESPN3.

For Jahn, a moment of hesitancy from the Monarchs’ defense was all he needed to notch his first goal this season for Sacramento.

“It just happened really quickly right after the half, and James whipped in a good ball and defender kind of let it go,” Jahn said postgame. “He was unsure about clearing it and I just pounced on it.”

The 6-foot-3 forward – who scored six goals on loan with Sacramento in 2014 as he helped the side to a championship in its first season – proved a key figure throughout the night for Sacramento as Republic FC brushed aside the disappointment of Saturday’s 2-2 draw with the LA Galaxy II.

In contrast with the contest with Los Dos, Sacramento rarely put a foot wrong in the defensive end of the field, and came close to adding to its lead when Cameron Iwasa was denied first by the crossbar, and then by a standout save by Monarchs goalkeeper Lalo Fernandez on Octavio Guzman.

“We just wanted to get a second one after we got the first one,” Jahn said. “The first half we thought we had the better of the play, I think we just needed the goals coming. At halftime, Paul was just telling us to be patient and have confidence and its coming, and we finally got one. We got the goal and kept the shutout.”

With a rematch against the Monarchs coming up this Saturday at Greater Nevada Field, which will also feature 2017 USL expansion club Reno 1868 FC unveiling its official jersey, Buckle said he believed his side was moving in the right direction to push higher than its new fifth-place standing in the Western Conference.

“The whole squad was excellent,” said Buckle. “There’s an energy about us now, there’s a real energy about, a purpose and understanding.”