Lapses Cost Republic FC in Draw in Front of 11,569 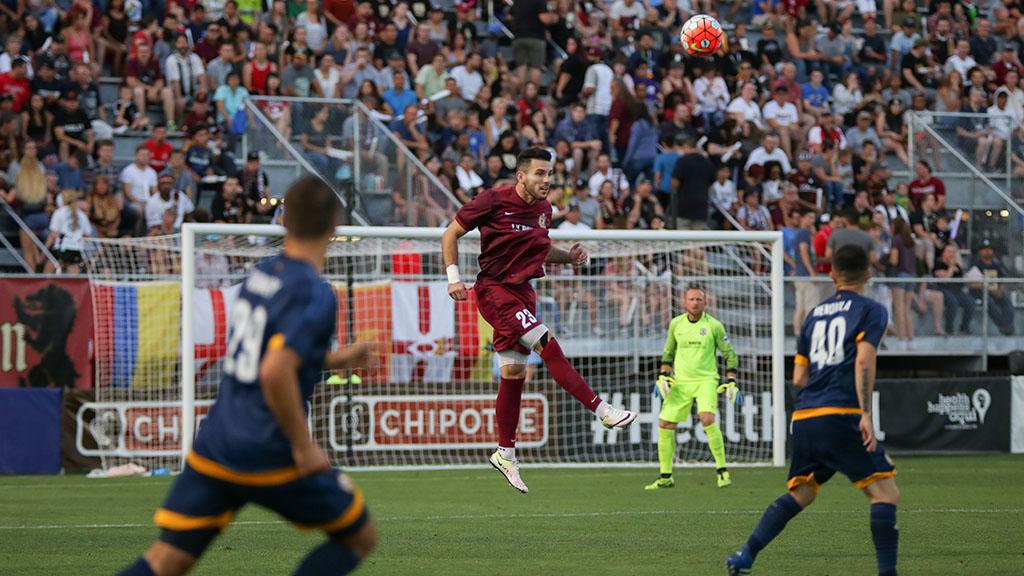 SACRAMENTO, Calif. – In a game that had everything you would expect from a classic rivalry clash – a capacity crowd of 11,569, and back-and-forth action between two teams eager to go toe-to-toe – Sacramento Republic FC Coach Paul Buckle was left frustrated by a two-minute spell that saw his side go from holding the lead to having to fight back to earn a 2-2 draw with the LA Galaxy II on Saturday night at Bonney Field.

Midfielder Danny Barrera quickly went from hero to villain in the 10-minute span that saw him first give Sacramento the lead, only to be at fault for Los Dos’ opening goal. Then, a mental lapse by Derek Foran that allowed Jose Villarreal to steal in and give the visitors the lead a minute later left Buckle shaking his head in bemusement.

“If you’re a central midfielder you track your runners, which Barrera didn’t do,” said Buckle following the game. “If someone runs through the middle, you track them. And he didn’t do it and it cost us.

“So then we’re back to 1-1 and then we do a carbon copy of what we did in the Open Cup the other night. We gift them a goal. I’m not going to let them get away with it. I’m not going to brush it under the carpet and say it’ll be okay next week because we’ve gone from being a very, very capable team with and without the ball to a team now really that is taking risks at the back which we don’t need to do.”

After a stunning five-minute spell that saw Republic FC concede three goals to the PDL’s Kitsap Pumas, which resulted in a failure to advance to face MLS opposition in the Lamar Hunt U.S. Open Cup for the first time in its history on Wednesday, a repeat performance was definitely not to be expected. Foran’s error, which saw Villarreal pick his pocket as he held the ball too long before finishing calmly past Dominik Jakubek, had Republic FC fans having flashbacks.

For his part, Kiffe was one of the keys to Republic FC getting back into the game. The left back looked to join the attack frequently, and his forays down the flank ended up producing the equalizer with nine minutes to go as Daniel Trickett-Smith scored his first league goal for Sacramento since joining the club last month.

“I picked my head up and no one was in the box for the first one and I actually saw Adam [Jahn] in the box,” Kiffe said. “I couldn’t even see who got on the end of it but it kind of goes to them for making the run in the box. Big time.”

Now undefeated in four consecutive games in the league, but sitting ninth in the Western Conference standings, Republic FC enters a crucial week that will see it square off with Real Monarchs SLC both on home turf in the USL Game of the Week on ESPN3 this Wednesday night, and then at Reno’s Greater Nevada Field next Saturday.

With the Monarchs sitting one spot ahead of Sacramento entering Week 12, getting the right results will be crucial as the race for the playoffs heats up.