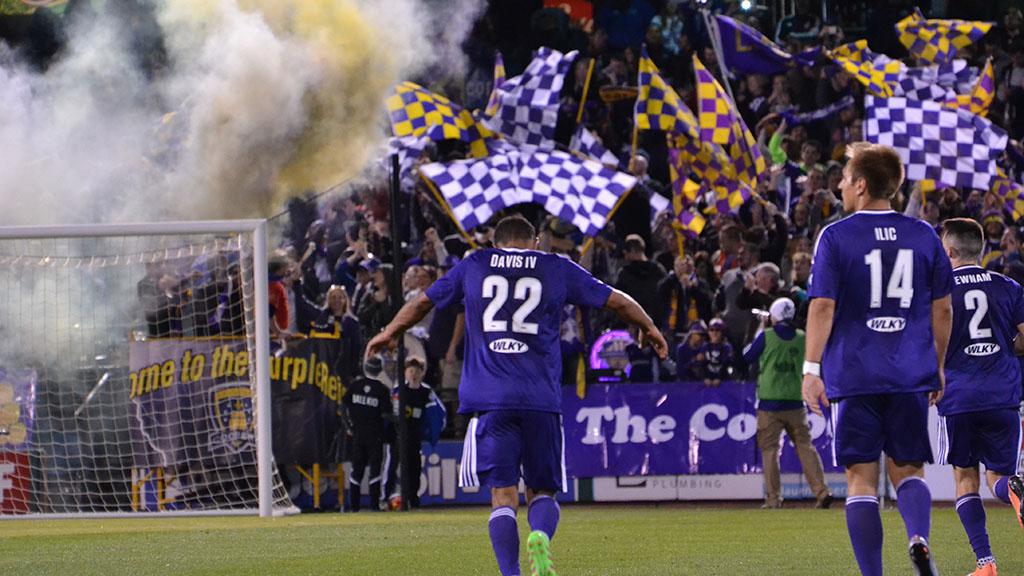 Only three teams in USL history have previously accomplished what Vancouver Whitecaps FC 2 have in starting the season with a 10-game undefeated streak, and each of those went on to claim the regular-season championship.

But, after back-to-back draws in the past week that saw WFC2 let leads get away on each occasion, this week’s USL Power Rankings see Louisville City FC return to the top of the list. On a nine-game undefeated streak of its own, City pulled off the impressive feat of handing Charleston its first home loss in the league in more than two years.

Add in Louisville’s remarkable defensive record of late, and it’s hard to make a case any other team is playing better in the USL at this moment.

1. Louisville City FC (Previous: 3)
Last Week: W 2-0 at Charleston Battery
Lousiville accomplished something no side had done in more than two years in the USL regular season or  playoffs with its win against Charleston at MUSC Health Stadium, and also extended its undefeated streak to nine games in the process. Defensively, City has now put up five consecutive shutouts in league play, and has more points than any team in either conference.

2. Vancouver Whitecaps FC 2 (Previous: 1)
Last Week: D 1-1 at Saint Louis FC; D 2-2 vs. Real Monarchs SLC
WFC2 is still undefeated, but after letting two leads slip over the course of the week, Coach Alan Koch’s side also slips a place in the power rankings. A rematch with Real Monarchs SLC this Saturday will give the side the chance to put right the mistakes from Sunday afternoon as Vancouver aims to keep its hold on top spot in the Western Conference.

3. Colorado Springs Switchbacks FC (Previous: 2)
Last Week: D 1-1 vs. Orange County Blues FC
Everything was in line for another home win for the Switchbacks on Friday until what certainly appeared to be an unlucky break befell them against Orange County, which converted a late penalty to take a 1-1 draw back to California. If anything, the result should provide motivation for Coach Steve Trittschuh’s side, which welcomes Saint Louis FC to Colorado Springs this Saturday night in a big Western Conference contest.

4. New York Red Bulls II (Previous: 4)
Last Week: W 1-0 vs. Pittsburgh Riverhounds
Another week, another winner for Junior Flemmings as the Red Bulls II kept up the pressure on Louisville at the top of the Eastern Conference standings. The Red Bulls defense wasn’t completely watertight against the Pittsburgh Riverhounds on Saturday night, but it did enough to record a sixth shutout of the season, with a Sunday trip to visit Bethlehem next on the slate.

5. FC Cincinnati (Previous: 6)
Last Week: W 2-0 vs. Harrisburg City Islanders
Cincinnati continued to pack them into Nippert Stadium with a crowd on 16,097 on hand to see the side take a 2-0 win against a Harrisburg side that was coming off back-to-back victories. With the defense starting to match the attack’s form with back-to-back shutouts, this Saturday’s game against the Richmond Kickers should be a must-see.

6. LA Galaxy II (Previous: 9)
Last Week: W 4-1 vs. Arizona United SC
The Galaxy II have definitely turned the tables on Arizona this year, after losing all three meetings against United in 2015. Jack McBean is the first player to double-digit goals this season, and he also lent a hand on Ryo Fujii’s opening goal in the win at StubHub Center that saw the side make a welcome return to form ahead of Saturday’s visit to Sacramento.

7. Sacramento Republic FC (Previous: 7)
Last Week: D 1-1 vs. Swope Park Rangers
Republic FC needed an equalizer to earn a point against the Rangers after a busy week that saw it visit Reno for the first soccer game in Greater Nevada Field’s history. Coming off back-to-back wins, Sacramento will be hoping to muster a similar performance to its 2-0 win in LA earlier this season when it hosts archrival the Galaxy II on Saturday night at Bonney Field.

8. OKC Energy FC (Previous: NR)
Last Week: W 3-1 vs. Real Monarchs SLC
Energy FC’s undefeated streak reached seven games on Tuesday night as it took an emphatic 3-1 win against a good Real Monarchs SLC side at Taft Stadium. With Danni König bagging his second goal of the season, things definitely appear to be on the right track for Coach Jimmy Nielsen’s side.

9. Rio Grande Valley FC (Previous: 10)
Last Week: D 0-0 at San Antonio FC; D 1-1 at Saint Louis FC
The Toros went into two tough environments and left with a pair of points that definitely bolstered their  playoff credentials. The side might even have got a win in Saint Louis if not for a strong Goal of the Season contender by Irvin Herrera on Sunday night, but will probably be happy enough with the week’s work ahead of a return home to face San Antonio this Saturday.

10. Saint Louis FC (Previously: NR)
Last Week: D 1-1 vs. Vancouver Whitecaps FC 2; D 1-1 vs. Rio Grande Valley FC
Two home games and two draws might on the face of it appear a little disappointing, but Saint Louis could have grabbed victory in both games, particularly the midweek draw with WFC2 that saw Chad Bond hit the crossbar twice. As it is, STLFC is solidly positioned ahead of a massive game with Colorado Springs this Saturday night.