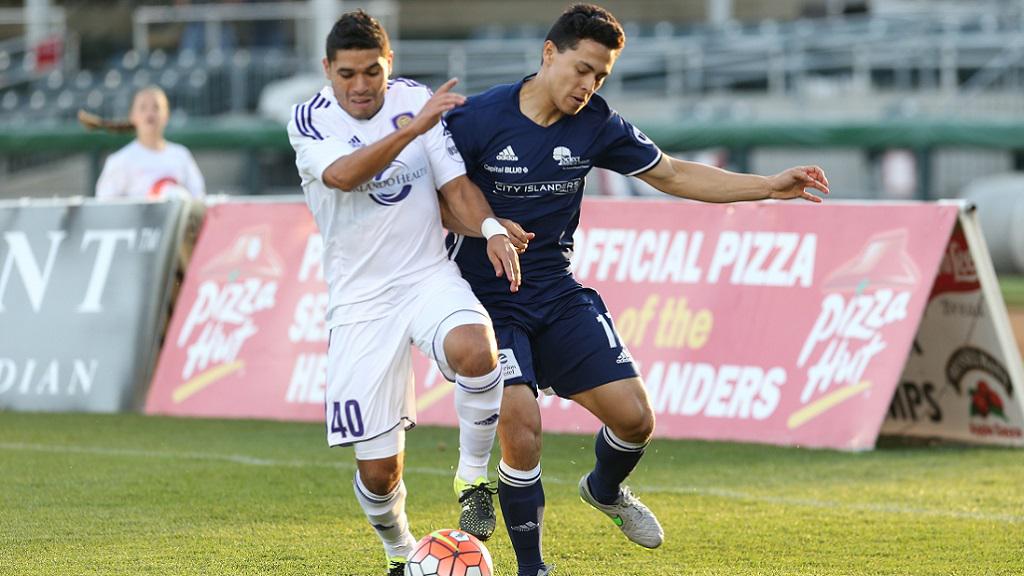 HARRISBURG, Pa. – The Harrisburg City Islanders created an early own goal and defender Shane Johnson provided a set-piece goal as the host side defeated Orlando City B 2-1 on Monday at FNB Field. Orlando’s lone goal was scored by Honduran striker Bryan Rochez.

It marked the teams’ second meeting in a span of 10 days. Harrisburg won the first meeting 1-0 on April 16 at the Titan Soccer Complex.

The first tally of the match came by virtue of an own goal as Harrisburg’s Jose Barril crossed the ball in from the left. OCB defender and captain Kyle McFadden attempted to clear with his right foot as he reacted quickly in front of his goalkeeper Mark Ridgers. Unfortunately from Orlando’s standpoint, the deflection went into the team’s own net as Harrisburg took the 1-0 lead in the 16th minute.

In the 22nd minute, OCB found an equalizer after Harrisburg’s Liam Doyle committed a foul in the box. Rochez took the penalty and slotted a right-footed shot into the right of the frame as Harrisburg goalkeeper Nick Noble anticipated the ball going the other direction as the score was tied at 1-1.

In the 33rd minute, after Orlando defender Tyler Turner was issued a yellow card, the City Islanders took full advantage of the set-piece opportunity. City Islanders midfielder Paul Wilson sent in a bending right-footed cross from the left and Johnson rose for the header in front of Ridgers, crisply driving the ball into the back of the net to regain the lead at 2-1.

Ridgers had a hectic first half to deal with, coming up with back-to-back saves in the 43rd minute to minimize the damage and help Orlando go into the halftime break still down a goal.

Johnson nearly found a second goal again on a set piece in the 57th minute, but his header was driven just wide left of the net.

In the 83rd minute, the City Islanders’ Bobby Warshaw was sent off when his attempted bicycle kick struck Orlando’s Keegan Smith in the head. The sequence occurred during a Harrisburg corner kick from the left side. The ball was up for grabs and Warshaw’s boot struck Smith in the face. The City Islanders were forced to play the remainder of the match with 10 men.

Orlando had one final attempt in the fifth minute of stoppage time, but Harrisburg goalkeeper Nick Noble came up with the save to secure the team’s second victory.

USLSoccer.com Man of the Match
Nick Noble, Harrisburg City Islanders – After a relatively quiet first half, Noble was called upon during multiple occasions in the second half to maintain the City Islanders’ one-goal lead. The defense also withstood Orlando’s attack down the final stretch as Harrisburg played down a man for the final eight minutes of regulation and stoppage time.