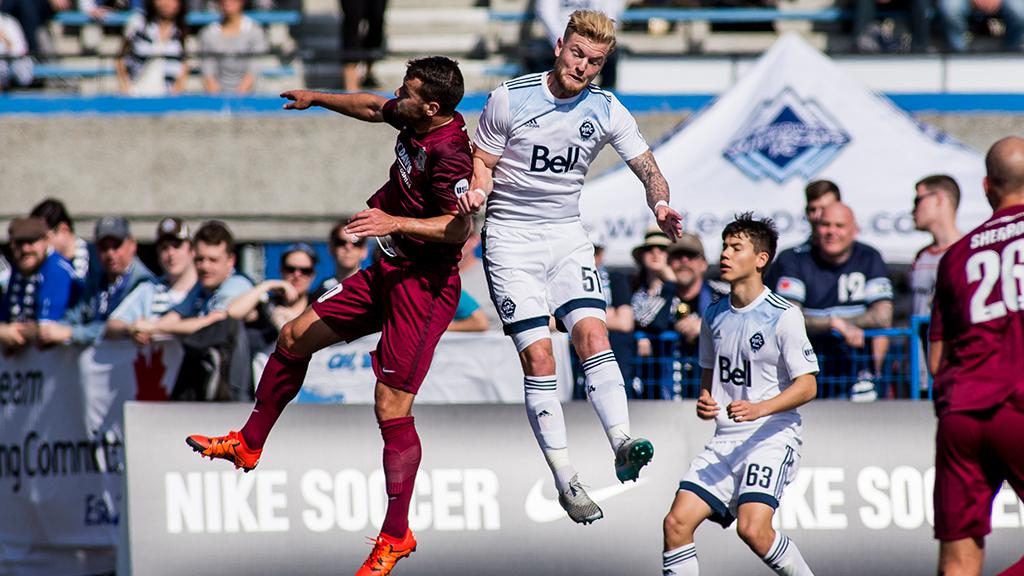 VANCOUVER, B.C. – With both sides having given up just one goal between them all season, Sunday’s clash between Vancouver Whitecaps FC 2 and Sacramento Republic FC was always going to a strong defensive affair, with little to separate the two teams. That was exactly how it played out.

Both teams had goals disallowed and penalty shouts waved away in an even first half, and although the visitors controlled much of the second half, they couldn't find the telling ball to break the deadlock.

Sacramento coach Paul Buckle felt his side deserved more from the game and particularly unhappy at what he saw as a "stonewall" penalty that wasn't given to his side and Thomas Stewart's offside goal. That said, he was still pleased to come away from the game with Republic FC's unbeaten record intact and feels their strong start bodes well for what is to come this season.

"It's an away game for us, against a team that's unbeaten, so we're sort of pleased with a point," Buckle told USLsoccer.com after the game. "I thought it was a tough game. We totally dominated the second half. We controlled it. We moved the ball very well. We just struggled with the final ball.

"I'm very proud of our start. I think we're going to be a strong contender this year. We've shown a lot of willpower in games. We've showed a lot of strength."

Buckle paid credit to Vancouver's defensive qualities and felt they gave his side a tough test, but it was no more than he expected, with the Englishman feeling that when his side takes to the pitch, teams automatically raise their game against them.

"We're a scalp in this division," Buckle said. "Teams want to beat us. Teams wants to play against us, especially at Bonney Field and certainly away from home.

There is no doubting that Sacramento are a benchmark club that many teams in USL measure themselves against, and WFC2 is no different in that view. WFC2 head coach Alan Koch sees Sacramento as one of the favorites for the league this year and felt that getting a draw against one of the top teams in USL was a credit to his young side.

"You're playing against a good, older, experienced team," Koch told reporters after the match. "We were under the cosh a little bit during the course of the game, but to withstand what they threw at us and make sure that we got the clean sheet, we're very, very proud of the guys.

"To get one point against a team as good as Sacramento, we're happy. We'd like to build towards winning those games at the end of the season, but I think for where we are right now, we're in a very good place."

Vancouver lost both of its matches against Sacramento last season, and Koch feels the difference in the performance from last year to Sunday's draw, along with how his team have played in their two road wins to begin this season, is a clear example of how far his young group have come, showing they can go toe to toe with anyone in the league.

"We've come on leaps and bounds," Koch said. "A game like today, last year, we probably would have lost that game. Both games we played at the start of the season on the road, we wouldn't have got three points last year. As a team, we've grown substantially.

"You can tell the culture of our group. The players are growing. They're feeling it, which is a huge part of football. They have the confidence to go out and play against anybody in this league. Having said that, we're certainly not going to get carried away by any means. It's a one game at a time mentality."

As cautious as they want to be publically about their strong start, the Whitecaps will be buoyed by their unbeaten start against tough opposition.

WFC2 started four teenagers in the win against Portland last weekend and three in the draw with Sacramento, with average age of the team being 21. Getting that early success with his young group should serve Vancouver well later in the season.

"We can take a lot of confidence from it," Koch said. "We're the youngest team in the Western Conference and the USL, so to have seven points and be near the top of the table is fantastic for our group.

"We gave young players an opportunity to play again today and I think they took that opportunity. They're growing and they're getting better every single week and when the individuals grow, the team's going to grow as we go along."