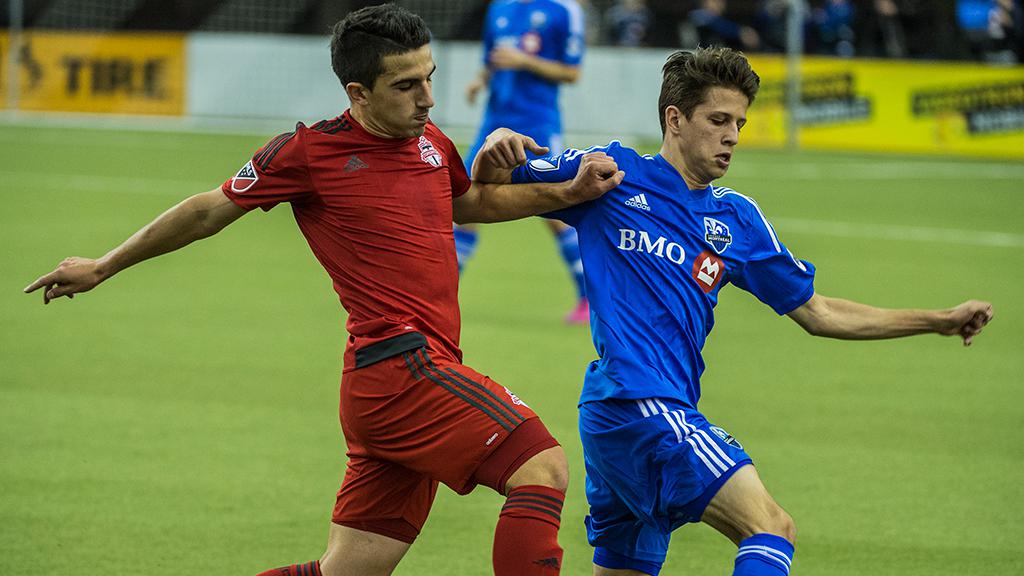 TORONTO – After a weekend off, Toronto FC II is looking forward to renewing its rivalry with FC Montreal this weekend at Stade Olympique after the side claimed a draw with the New York Red Bulls II on the opening weekend of the season.

“They’re a solid side all around,” said defender Skylar Thomas on Tuesday. “They’ve got good players in attack that could hurt us, and we’ve basically got to be aware of them and understand how they play and we’ll be fine.”

Thomas was one of TFC II’s scorers in a 2-2 draw with the Red Bulls II in their last outing, with a beautiful volleyed finish that gave his side a two-goal lead right before the halftime break. While the side was disappointed to let the lead slip in the second half, Thomas said he thought the side had put in a solid performance overall.

Now in its second season, Toronto is looking to put together a stronger set of results than in 2015 when it finished second-from-bottom in the Eastern Conference standings. With numerous players returning, Thomas believes the team now has a better understanding of what it will take to be a playoff contender this year.

“I think all around as a club we have a little bit more of a competitive spirit,” Thomas said. “Last year I think we were kind of feeling our way through the USL, and we didn’t really understand how to get three points, but this year I think we have a better grasp of how to do that.”

With many of his club’s players now in their second seasons as professionals, TFC II Head Coach Jason Bent has also seen a difference in his squad.

“I think the players know the opposition a little bit better. They know the stadiums that we’re playing in. They also understand our training habits and how we want to train and approach the week as we build up to games,” Bent said. “I think from that standpoint the team is maturing a little bit more individually and collectively, and that’s been seen in preseason as well as the first game of the season. It’s a natural progressions and maturation of the team, so hopefully it can continue.”

Bent believes Thomas will need to be at the forefront of the team’s growth. The former K-W United FC and Syracuse standout

“I think I’ve mentioned it to him, and publicly as well, having more of a leadership role within the back line and with regard to tactical information, getting people into the right positions at the right time,” Bent said. “As you alluded to he scored a pretty nice goal. It was something he scored in training the day before, which was a surprise, so I don’t know if we’ll get too many of those, but we’ll take them when we get them.

“From my perspective, it’s more  on the other side of things that we’ll be showing them today in video that I think he can improve, and that’s going to be his bread and butter. The set pieces are a bonus, but it’s the other side of the game I feel he needs to improve on.”

Montreal will be looking to pick up its first points of the season after a 1-0 defeat to Bethlehem Steel FC in its opening game of 2016. After taking victory at Stade Olympique a year ago, Bent thinks his side will be able to draw on that experience as it looks to claim its first win of 2016.

“They tend to play quite a few young players, such as ourselves, and it’s a rivalry,” Bent said. “There’s no love lost. Both teams know what’s at stake. We were fortunate enough to be able to win on their ground last year, so we’re comfortable at that stadium and hopefully we can go in and do the job.”