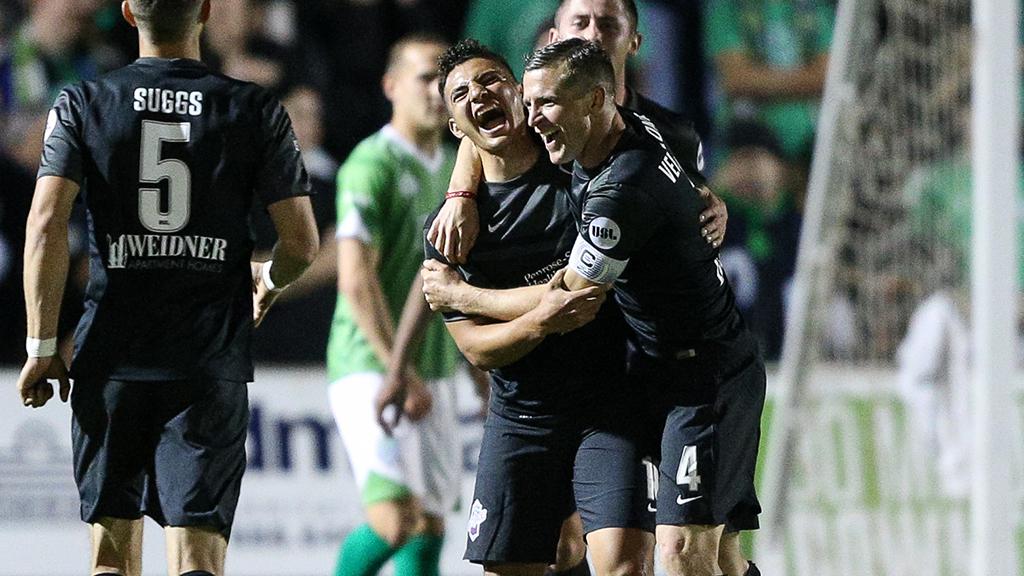 USL Kickoff Weekend started the new season off with a bang as we got our first proper look at the competition around the league.

With that, here are the Top 10 teams in the USL this week.

1. Colorado Springs Switchbacks FC
Last Week: W 2-1 at OKC Energy FC
The biggest game of the weekend didn’t disappoint when it came to entertainment, and the Switchbacks emerged with a big three points as they became only the third team to take a victory at Taft Stadium after Saint Louis FC and the LA Galaxy II last season.

2. LA Galaxy II
Last Week: W 2-0 vs. Arizona United SC
The defending Western Conference champions looked very strong again as they rode a pair of goals by Ariel Lassiter to a victory against Arizona United SC. Despite being reduced to 10 men for the final half-hour, LA allowed only three shots on goal as it put in a strong all-around performance.

3. Charleston Battery
Last Week: W 1-0 vs. FC Cincinnati
The Battery left it late to take a victory against FC Cincinnati as Romario Williams struck in stoppage time, but going up against a well-organized expansion team that could certainly have taken a share of the spoils, the Battery looked in very good early-season form.

4. Swope Park Rangers
Last Week: W 2-1 vs. Portland Timbers 2
The Rangers arguably should have taken a more comfortable victory against T2 given the number of chances they created throughout the contest. Should Dane Kelly and Kris Tyrpak sharpen up slightly, as you’d expect they will, the Rangers are going to be a strong contender.

5. Louisville City FC
Last Week: W 1-0 at Charlotte Independence
Louisville also left it late as Cameron Lancaster’s wonder-strike earned a valuable three points on the road. Louisville’s attack might not have struck in its opening game in open play, but 18 total shots showed off its intent ahead of a fascinating home opener against the New York Red Bulls II.

6. Richmond Kickers
Last Week: W 3-1 vs. Harrisburg City Islanders
The Kickers wanted to be more dynamic offensively this season, and it looked as though they have the pieces to do just that against Harrisburg on Saturday. Brian Ownby and Yudai Imura will take care of pulling the strings, while Jason Yeisley getting off the mark was a very good sign in a very positive result.

7. Sacramento Republic FC
Last Week: W 1-0 at Seattle Sounders FC 2
Republic FC was nicely efficient in its victory against S2 on Friday night, as it allowed a good Seattle lineup only one shot on goal in its 1-0 victory. Returning key players Danny Barrera and Tommy Stewart both also looked in good shape ahead of Saturday’s home opener against Arizona.

8. Tulsa Roughnecks FC
Last Week: W 2-0 vs. Rio Grande Valley FC
There were many things to be excited about by in Tulsa’s opening win of the season, but the win came with somewhat of a warning sign that the club’s defense hasn’t quite tightened up as much as Coach David Irving would like. Nine saves for Alex Mangels on his pro debut was impressive, but shouldn’t be the norm for Tulsa if it wants to be a contender.

9. Bethlehem Steel FC
Last Week: W 1-0 at FC Montreal
The Steel got out to a great start with a win on the road, but will probably feel they have another gear or two to hit. They’ll likely need that this weekend in their home opener as they welcome an FC Cincinnati side that looked strong despite its defeat to Charleston.

10. Wilmington Hammerheads FC
Last Week: W 2-1 at Orlando City B
Taking a victory in his first game as a head coach was a nice moment for Mark Briggs, who was part of so many victories as a player for the Hammerheads. Now they get to return home for a massive test as the Richmond Kickers come to Legion Stadium on Friday night.