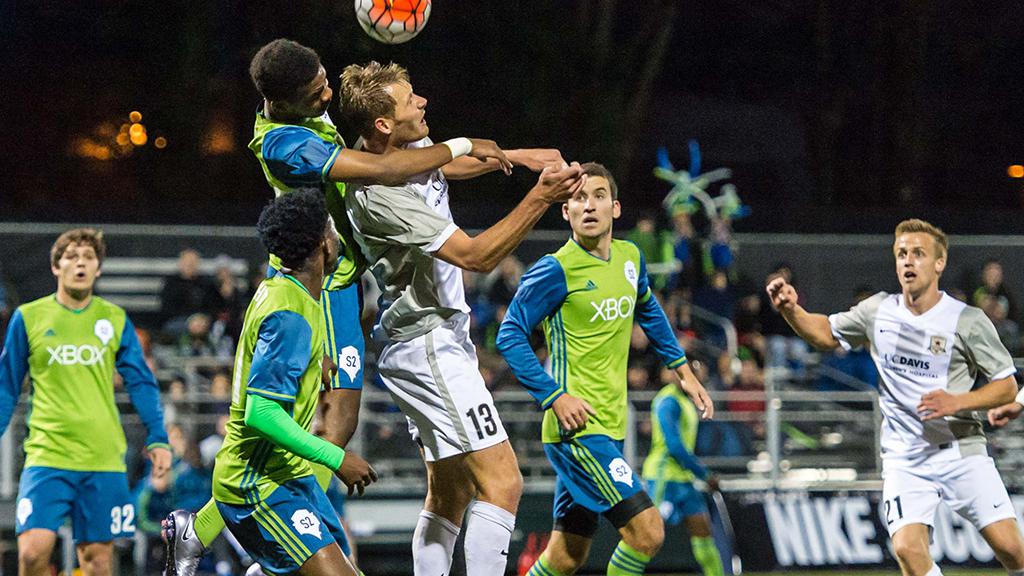 When the team sheets were submitted, Sacramento Republic FC Coach Paul Buckle knew his side would face a strong test in its opening game of the 2016 USL season.

Thanks to a solid defensive outing, and Tommy Stewart’s goal from a penalty kick, Sacramento was able to emerge with a strong road victory at Starfire Stadium.

“I thought we were worthy winners,” Buckle said. “We were very solid first half, some of our moves with the ball were excellent, just missed that final touch, but we had a real great spirit.”

Coming off a championship in 2014, Sacramento visited Seattle on the opening weekend last season, and were ambushed as Andy Craven led S2 to victory in his professional debut.

Now signed to the Sounders’ MLS squad, Craven again was in the lineup on Friday night for Seattle, but he and the rest of the players on loan were unable to find a breakthrough as a back four that included new addition Chris Christian alongside Derek Foran at center back.

“This was a big test for our players,” Buckle said. “Having that many first teamers out against us, that was a challenge. The challenge was can we come here and get a result and secondly prove to ourselves and our fans that we can compete with a team that is full of MLS players.”

Stewart’s goal arrived midway through the second half after Adam Jahn, himself on loan from the San Jose Earthquakes, was pulled down in the penalty area. After finishing with only three goals in an injury-hit 2015, Stewart would have been pleased to open his account.

The Irish forward was likely happier to have seen his side open the season with a victory. In front of a strong group of travelling support, Sacramento made a solid opening statement to start the season.

“We are a family,” said veteran goalkeeper Dominik Jakubek after recording the shutout. “We all believe in each other, we work for each other, there are no egos.  If we can stay close knit and keep playing that family football, we can do it again.”