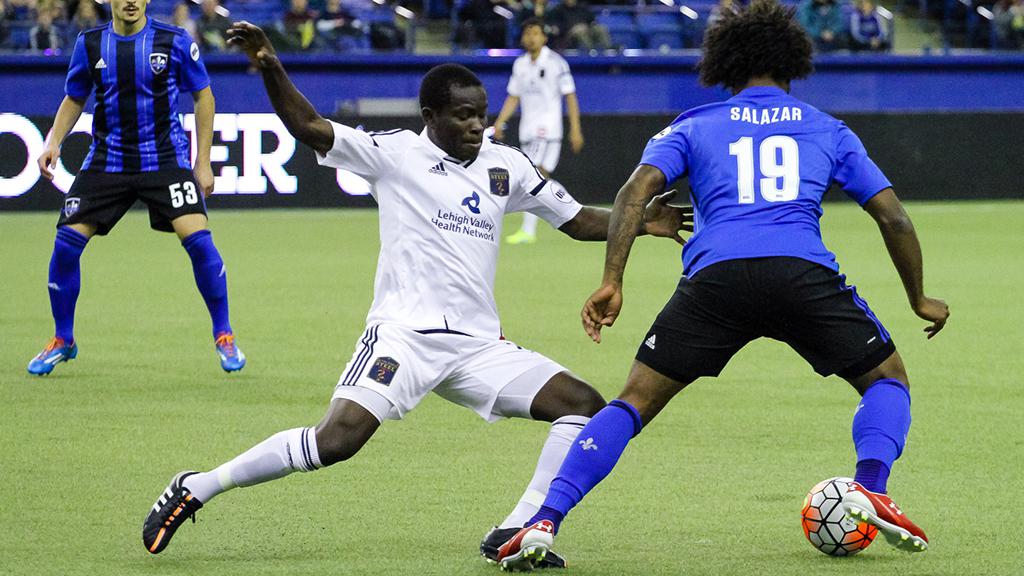 MONTREAL – USL expansion side Bethlehem Steel FC’s Fabian Herbers scored the first goal in team history and the Steel held on for a 1-0 victory against second-year club FC Montreal in the opening match of the 2016 USL Kickoff Weekend on Friday night at Stade Olympique.

The Steel, owned and operated by Major League Soccer’s Philadelphia Union, opened up their first season with a 43rd-minute goal. Herbers was set up by Colombian winger Walter Restrepo, who crossed from the left side past his defender to find his teammate unmarked in the box. Herbers had no pressure to deal with and calmly slotted inside the left post to give his side a 1-0 lead heading into halftime.

That would be all the Steel would need as goalkeeper John McCarthy and the defense held off Montreal the rest of the way for the clean sheet.

One of the best early sequences of Friday match came in the ninth minute when the Steel nearly struck off the foot of James Chambers. He played a give-and-go with Leo Fernandes, whose cheeky back heel pass perfectly set up Chambers. He fired a shot that caromed off the left post, and Chambers slapped the turf in disgust when his shot went just wide.

Montreal’s play picked up in the second half as the team mustered a couple of chances in the 56th and 59th minutes, the latter coming from Montreal Impact draftee Michael Salazar. His left-footed volley just missed the upper left corner of the frame.

The Steel had an opportunity to pad their lead in the 64th minute when Eric Ayuk rushed past Montreal’s defense on a counter attack. Ayuk shot from 11 yards out and FC Montreal goalkeeper David Paulmin made a key foot save to minimize the damage.

Montreal sub Charles Joly also made things interesting with a difficult shot from the right side in the box, but his 83rd-minute attempt went wide left of the goal.

The Steel (1-0-0, 3 points) will prepare for their home opener on Sunday, April 3, against fellow expansion side FC Cincinnati. Kickoff is at 3 p.m. ET at Goodman Stadium, on the campus of Lehigh University in Bethlehem, Pa.