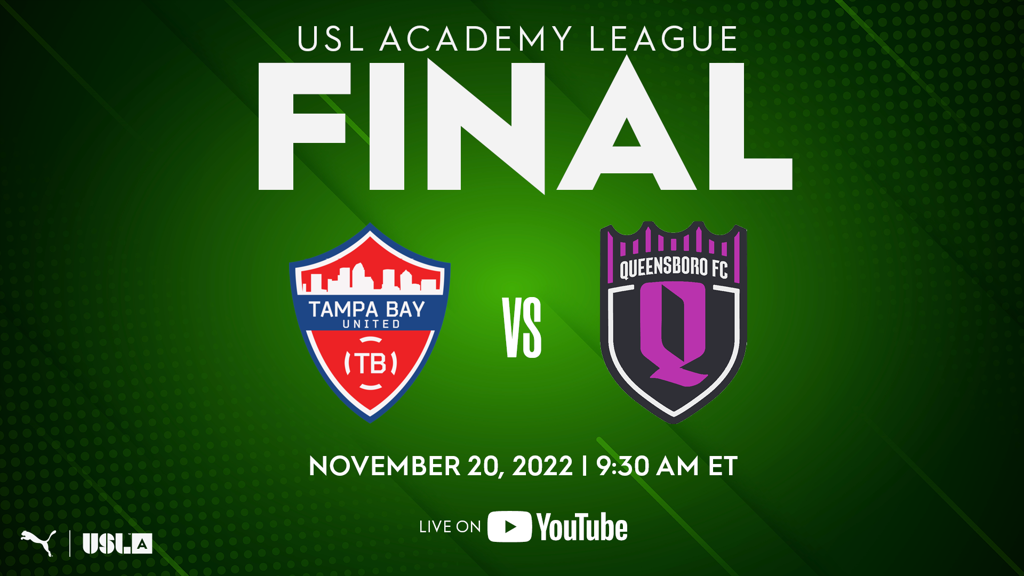 TAMPA, Fla. – Tampa Bay United and Queensboro FC will square off on Sunday in the Playoff Division Final of the 2022 USL Academy Finals at the Sportplex of Tampa Bay after each topping their groups to advance for a chance to claim the title. Kickoff is set for 9:30 a.m. ET and the game will air live on YouTube.

Tampa Bay advanced to the Final for the first time after topping Group A with seven points from three games. After playing to a 0-0 draw in its opening game against Indy Eleven, Tampa Bay grabbed a 4-3 victory thanks to Daniel Lugo’s stoppage-time winner in its second game against New Mexico United. Lugo was also on target in TBU’s 3-0 victory against AC Connecticut alongside Isaiah Wilson and Oliver Blake, and that win combined with a draw between defending title-holder Indy and New Mexico sent Tampa Bay through.

Queensboro advanced to the Final for a second consecutive year after winning each of its first two games of the tournament and will now hope to go one better than its runner-up place last season. QBFC took a 2-1 victory against North Carolina FC before sweeping past Chattanooga Red Wolves SC 3-0 behind goals from Jonathan Santillan, Joel Favard and Joshua Saavedra to secure its place in the Final. Queensboro fell 4-3 to San Antonio FC in its final group game despite a pair of goals by Tyler Glassberg as it rested some key players with advancement already secured.

Tampa Bay will play for its first Academy Finals title on Sunday but will be hoping to wash away the disappointment of falling in a penalty shootout in the USL Academy Cup Boys U-19 Division in April against Indy Eleven. With professional prospects on both sides – including for Tampa Bay full back Tate Johnson, who played in the USL Championship this season for the Tampa Bay Rowdies – Sunday’s Final should be a must-see clash.