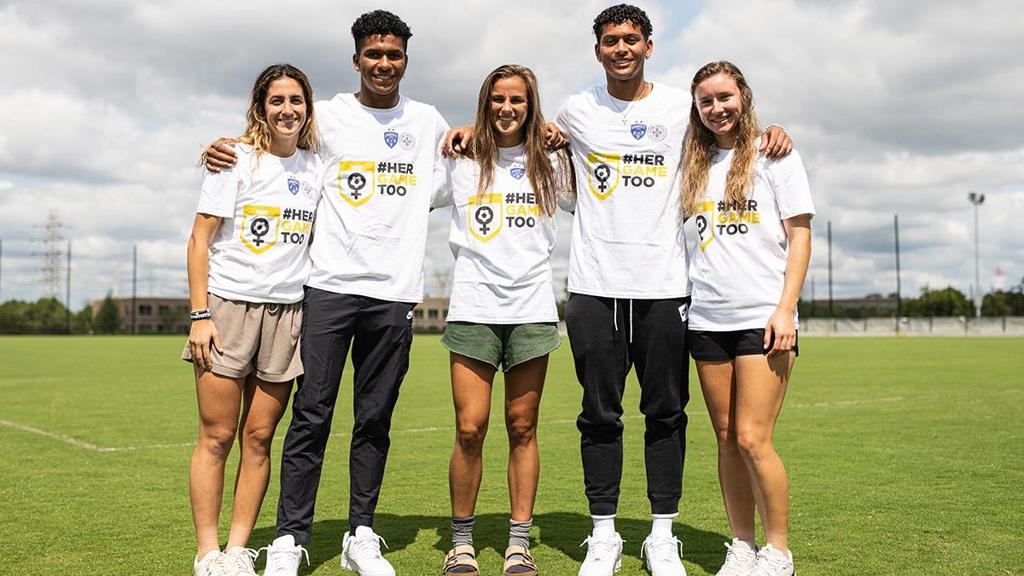 The movement has amassed a following across Europe since its founding in 2021 by 12 passionate female soccer fans. With Soccer Holdings’ support, it is now expanding to the U.S. market as the organization aims to create relationships alongside clubs committed to gender equality.

“I have always believed in ‘doing the right thing even when no one is watching,’ and at Soccer Holdings we believe that doing the right thing means leveling the playing field for all athletes,” said Soccer Holdings LLC co-owner Christopher Harding.  “That is why we invest equally into our men’s and women’s clubs. From our soccer-specific stadium to our state-of-the-art training facilities and an academy that creates a clear pathway to professional soccer for all our aspiring youth, an investment in equality will always win.

“We are honored to partner with HerGameToo to bring this meaningful movement stateside as we continue to shine a spotlight on our female athletes and work toward a new standard for women in sports.”

HerGameToo seeks to drive awareness, educate, and develop a strong sense of community by creating strong relationships with clubs. That includes having a local presence from stadiums to soccer bars, fostering a welcoming environment for women around the game.

"We are absolutely thrilled to expand our efforts by announcing the first U.S. partnership with Racing Louisville,” said Amy Clement, founder of HerGameToo. “The club has made an investment in equitable training facilities and a stadium that we believe all female athletes around the world deserve — and we hope to see other clubs follow suit. At HerGameToo, we are passionate about making football a more welcoming place for women and look forward to developing more opportunities for women in soccer.”

In Louisville, LouCity launched in 2015 and has won a pair of USL Championship titles, paving the way for construction of 15,304-capacity Lynn Family Stadium, which opened in the 2020 season. Soccer Holdings successfully applied for an expansion NWSL franchise along the way, with Racing Louisville FC beginning play in 2021, and this past summer the club also fielded a women’s pre-professional team in the USL W League’s inaugural season.

“As a founding ambassador for HerGameToo, I’m proud to say that we’ve seen forward progress in battling sexism in football across the UK since the launch of our campaign,” said Calum Best. “I’m thrilled to bring the movement to the U.S. in partnership with Racing Louisville under the leadership of my dear friend and colleague, Chris Harding, who has long championed women in sports.”

“I’m really excited to be an ambassador for LouCity and Racing with HerGameToo,” said Nieves. “The club has done an incredible job making sure that there is an equal playing field between their men’s and women’s sides. They have even gone above the norm in areas like by offering fertility preservation services to Racing’s athletes. This is going to be a great opportunity to contribute to for myself and the entire organization.”