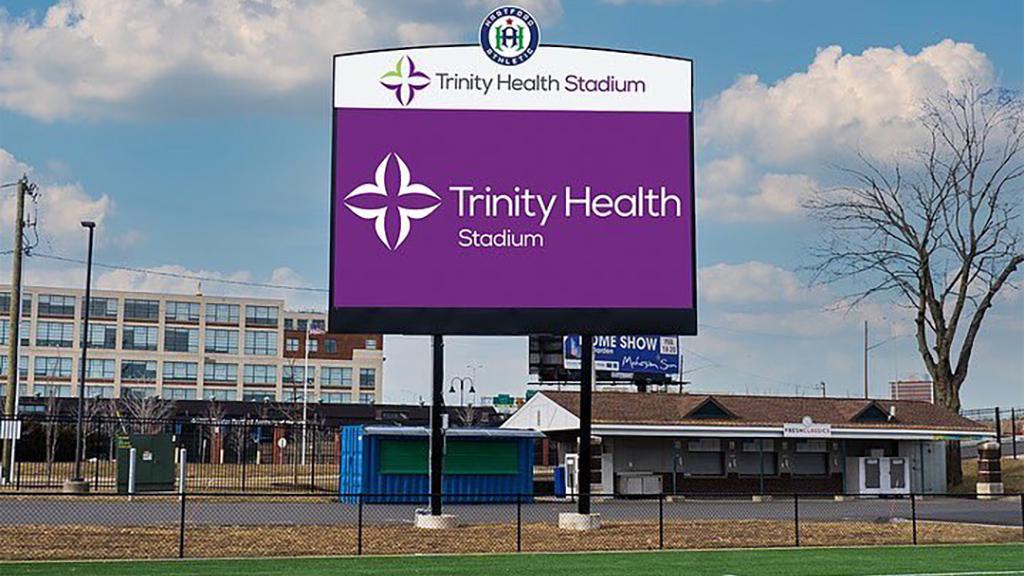 “Trinity Health Of New England has been a great partner to Hartford Athletic and has long served as an excellent corporate citizen and community leader in Hartford and beyond. After three great years together, we are excited to grow our partnership further,” said Hartford Athletic Chairman Bruce Mandell. “The new partnership is a strong indicator of their support and commitment to Hartford, and we look forward to working together for years to come.”

“Trinity Health Of New England is honored to be part of this historic moment for Hartford Athletic and the City of Hartford,” said Reggy Eadie, M.D., M.B.A., President and CEO of Trinity Health Of New England. “From the start, our partnership with Hartford Athletic has been an exciting collaboration to bring soccer to Connecticut’s capital city and provide our local communities with a family-friendly outlet and place to come together in a positive way. We are also thrilled that our team of talented physicians, along with our athletic trainer, will continue to provide medical care to this elite group of athletes and their passionate fans.”

Hartford Athletic and Trinity Health Of New England will continue to collaborate on a wide range of special community initiatives, along with outreach and educational events, in an effort to make the community healthier and bring people together through the world’s game of soccer.

“Trinity Health of New England has been a partner of Hartford Athletic since its inception, and that partnership will now be reflected in the name of this historic stadium,” said Hartford Mayor Luke Bronin. “This name is a symbol of Trinity Health’s commitment to Hartford, both on and off the pitch. It's almost soccer season again, and I’ll tell you that I cannot wait to watch some games this season at Trinity Health Stadium.”

As part of the lands gifted by the Colt Family to the City of Hartford, Municipal Stadium was constructed in 1935 under the Federal Emergency Relief. The Stadium was renamed in honor of James H. Dillon in 1956 who served as recreation director of the City of Hartford for nearly 40 years. A Hartford native, Dillon earned national recognition for his efforts during his tenure.

Dillon Stadium has long been a cultural hub and community asset for the City of Hartford and the Greater Hartford region playing host to major events, professional and high school sports, and more. In 2019, the City of Hartford, CRDA, Hartford Athletic, and the Hartford Foundation for Public Giving came together for a $14 million renovation of Dillon Stadium to revitalize it as a community asset and home to Connecticut’s professional soccer team. Over the past three years, the Stadium has returned as a hub of activity not only hosting Hartford Athletic home matches but also hosting a Community Day for residents of the city, the Small State Great Beer festival, CIAC Soccer State Championships, UConn Men’s and Women’s soccer, adult, high school and middle school soccer, and numerous other community events. Going forward, Trinity Health Stadium will serve as a venue for even more events including concerts, festivals, community events and more, and James H. Dillon will be commemorated prominently at the Stadium as his legacy lives on.