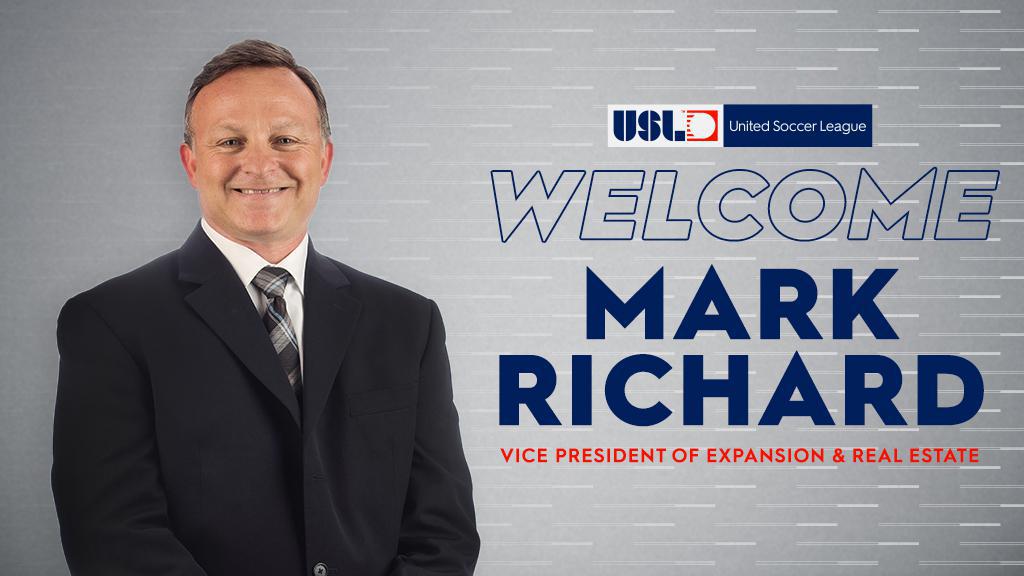 TAMPA, Fla. – The United Soccer League announced today that Mark Richard has been named Vice President of Expansion & Real Estate. In this role, Richard will oversee day-to-day management and creation of relationships with expansion markets across the United States as the USL continues to grow its footprint in communities across the country.

Previously, Richard served as President & CEO of the Downtown Spokane Partnership, a private, not for profit, membership organization that serves as Spokane's central city advocate and service provider, dedicated to enhancing the quality and vitality of Downtown Spokane as the basis for a healthy region, since 2013. During his tenure with the DSP, Richard was an advocate for the city’s new downtown stadium being approved for development by the Spokane Public School Board, and served on the Downtown Stadium Advisory Committee. A $31 million project, the 5,000-seat venue will serve as the home to all five area high schools for athletics and other events, as well as be the home to a USL League One team and W League team. The new venue will serve as a catalyst for economic development in the region, generating $11.4 million annually.

“Mark was a key and influential proponent of the downtown stadium becoming a reality in Spokane,” said USL COO & Chief Real Estate Officer, Justin Papadakis. “As we continue to grow the league and bring soccer to new markets, Mark understands firsthand the necessity to having strong working relationships with local leadership and city partners to bring these development projects to life. We look forward to having him join the team and bring with him his experience and knowledge.”

Prior to serving in his role with the DSP, Richard worked in residential real estate, where he was an independent broker and served as the Director of Governmental Affairs with the Spokane Association of REALTORS and Spokane Home Buying Association. Additionally, Richard served on several boards, commissions, committees and task forces throughout the greater Spokane area, including the Mayors’ Advisory Council on Downtown Environment, Spokane Health Advisory Council for the Regional Health Director and Board of Directors for the University District.

A native of Spokane, Richard graduated from Eastern Washington University.