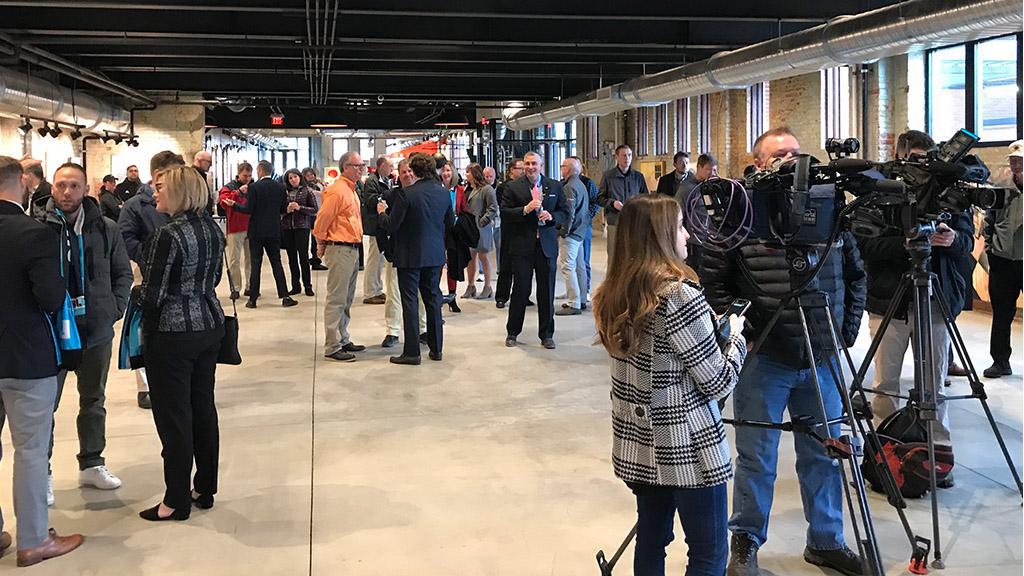 A large and enthusiastic crowd were on hand for Tuesday's press conference at the Wonder Center that saw County Treasurer Michael Baumgartner and USL COO Justin Papadakis proposes options for a downtown stadium in Spokane, Washington

SPOKANE, Wash. – The USL joined County Treasurer Michael Baumgartner on Tuesday and proposed several options for a new downtown stadium that would become home to a professional USL franchise in Spokane, Washington, as Baumgartner made the case in front of an enthusiastic crowd at the Wonder Building for the city to get behind the proposed project.

USL Chief Operating Officer Justin Papadakis presented the examples of current and under-construction venues in the USL Championship and USL League One that would offer potential savings to a proposed budget of $31 million, currently earmarked by Spokane Public Schools for a new facility in the northwest of the city.

Thank you @VoteBaumgartner and @CindyWendle for hosting @USL_HQ today and to everyone who joined us in the great city of #Spokane. A downtown stadium can meet the needs of youth and professional events and I look forward to working with you to bring pro soccer to the Lilac City! pic.twitter.com/2nOgbrN5Ac

Among those venues was the facility currently being constructed by League One’s South Georgia Tormenta FC that features a 5,300-seat stadium, Casino Arizona Field, the 6,200-seat home of the Championship’s Phoenix Rising FC which was built ahead of the 2017 season, and the new 8,000-seat venue being constructed by the Championship’s Colorado Springs Switchbacks FC, scheduled to open for the 2021 season.

A similar venue to the three presented, both Baumgartner and Papadakis believe, would not only offer greater value and economic impact for the city’s residents, but also fit into the growing sporting landscape in downtown Spokane. Already home to Spokane Arena, the Spokane Public Facilities District this past December broke ground on the new, $53 million Spokane Sportsplex, which is slated to open in Fall of 2021.

And while Baumgartner and Papadakis both were clear that for a USL side to call Spokane its home a downtown facility would be required, Baumgartner also assured the crowd on hand that any deal would need to make sense for all parties.

“I want to make sure that my taxes, just like yours, are going to the most fiscally responsible projects they can find,” Baumgartner said. “Nothing will happen that’s not a win-win for Spokane.”