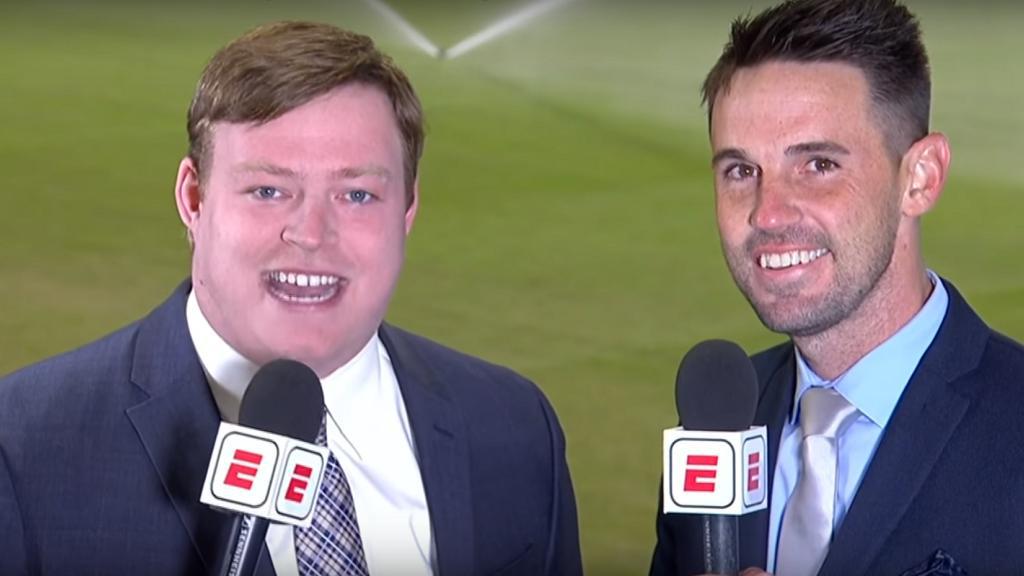 Since debuting as the voice of the USL Championship at the 2015 USL Cup, Mike Watts has had a first-hand view of the league’s progression and growth.

As he enters his fourth full year as the play-by-play voice of the league’s national broadcasts after inking a new contract this month, the heightened presence the Championship holds in the North American soccer landscape has exceeded expectations even for those like Watts that have followed the league closely over that span.

“The first word that comes to mind is, ‘wow’” Watts said recently. “The growth has been explosive, the following has grown significantly in numbers and in passion and I think what the league and the teams and the players and the fans have done to grow not only the USL Championship but soccer in this country is really inspiring, and gives me a lot of hope for the direction of the game in this country.”

Watts himself has had a similar trajectory. While last November’s USL Cup broadcast was his fourth, the talent and energy that Watts brings to every call has seen him feature prominently on Concacaf Champions League broadcasts over the past two years, including calling Pachuca’s victory in 2017’s final and Chivas de Guadalajara’s a year ago. On top of that, 2018 saw him become the play-by-play voice for the Cincinnati Bengals’ preseason broadcasts alongside Pro Football Hall of Famer Anthony Munoz, and feature regularly on ESPN’s digital airwaves as he logged 203 broadcasts over the course of the past 12 months.

Watts credits the experience he gained through the USL Championship as a reason those doors have opened, providing the chance to call high-profile contests that have shown off his prodigious ability as a broadcaster.

“I get goosebumps thinking about it because I’m still really young, and the USL Championship gave me a shot at a young age,” he said. “2015’s final in Rochester, I remember thinking, ‘wow, what a huge opportunity this is for me at 22 years old to call a professional final.’ To be a guy that’s called Champions League finals in this country, four USL Cups is extremely gratifying, but to be able to expand what I’ve done over the past year with ESPN and with the Cincinnati Bengals and the NFL is some of the greatest steps forward I’ve taken in my career yet.

“It’s wild to me, because a lot of the time I don’t think I deserve it, but these opportunities keep coming and I’ve tried my best to keep them in front of me and do the best I can with each individual game, give my best effort, and it’s been just remarkable for me.” 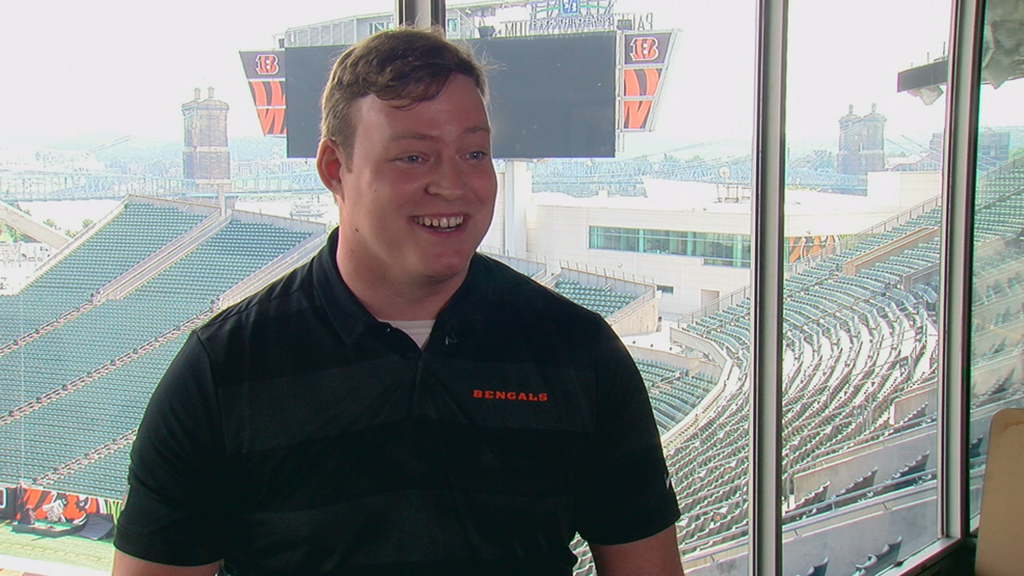 In addition to his duties as the USL Championship's national play-by-play voice, Mike Watts also joined the Cincinnati Bengals' preseason broadcast team this past summer for the first time. | Photo courtesy Mike Watts

As you might expect, Watts has remained busy throughout the USL Championship offseason as the college basketball season has swung into high gear. Among the contests he’s been assigned by ESPN, those that have taken him back to Fordham University – where he was named the 2014 Marty Glickman award-winner during his time on campus – have been among the most enjoyable.

“I have so much love and respect for where I’ve come from,” said Watts. “My greatest mentor in this business, Bob Ahrens, is a Fordham and WFUV guy, which has this tremendous broadcasting tradition, and to still have a role and a place there is something that really matters a lot to me. I think loyalty and knowing where you’ve come from is paramount for everybody, for players and for broadcasters too. I feel like part of a lineage there and a fraternity, it’s a lot of fun to go call games and be a part of it still four years on from having left.”

At USL Productions’ home base at Vista WorldLink in South Florida, Watts has also developed a bond with the broadcasters, producers and directors that have aired more than 1,000 USL Championship games over the past two seasons. The world-class production facility – which in addition to USL Championship broadcasts also produces games for the National Women’s Soccer League and Concacaf in addition to other sports – is a hive of activity most days, but never more than on a busy Saturday night that sees numerous games sent out to both digital platforms and local broadcast outlets through its REMI (Remote Integration) production system.

Working alongside the likes of regular broadcast partner Devon Kerr and fellow young play-by-play announcer Tyler Terens – both of whom Watts has high praise for – there exists the opportunity to thrive in an environment where week-in and week-out collaboration has brought all the talent closer together.

“Devon and Tyler are special for sure, but if we’re going to do 10 games in a night, you’re working with 10 or 20 broadcasters, and I’d be remiss not to say producers and directors, who live and breathe this game,” said Watts. “It gives you a sounding board, we’re always chatting, ‘what did you think about this guy, what did you think about the way this team just played?’, it gives you this incredible wealth of knowledge and resources to better cover the league and the game.” 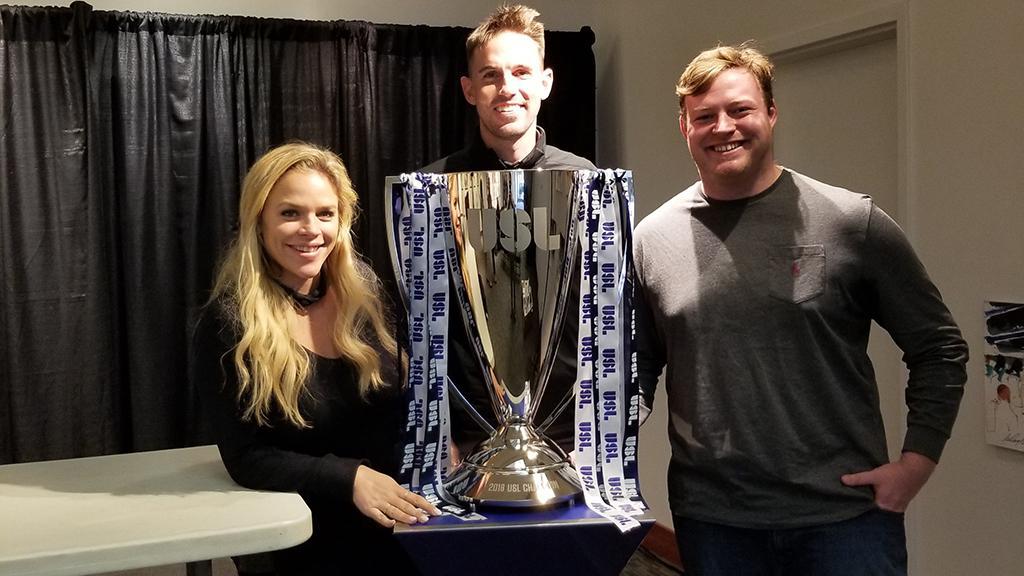 Watts’ preparation for the new Championship season is also in full swing, with storylines like Louisville City FC’s quest for a third consecutive USL Cup, the effect departures of headliners like Joe Cole and Didier Drogba from the Tampa Bay Rowdies and Phoenix Rising FC will have on those sides and what the league’s expansion sides will bring among those he’s interested to follow.

The unpredictability that the Championship has seen in his time calling games, though, has meant maybe the most interesting storyline is which side is going to be 2019’s surprise package.

“At the end of the day you always feel like you can map out some of the season in your brain and a month in you realize there are a handful of teams that have taken your whole thought process and thrown it away,” said Watts. “I’m interested to see which teams those are, because Tulsa two years ago was one of those teams, and there were a couple that stood out this past year that did the same thing.”

With the experience and cutting-edge technology the staff at USL Productions and Vista WorldLink bring, the biggest year in the Championship’s history is one that Watts is excited to have a front-row seat for as he brings action around the league to life one game at a time.

“You are surrounded by people who love and support these leagues, and that’s the kind of environment any broadcaster, any person in sports loves to be around,” said Watts. “The producers and directors and the staff there give us a chance to tell these awesome stories and show these games to a much wider audience than I think a lot of people imagined not too long ago, so you go down there and you’re solely focused on one thing and that’s bringing games to people and giving players and organizations and leagues a renewed and growing spotlight.

“They’re doing something that five years ago was unimaginable at this rate and this level, and this year is going to be even better than the last couple. Everyone’s working really hard to try and get ready for next year, and we’re going to do more, and do more work, and it’s going to look even better than it did in the past.”