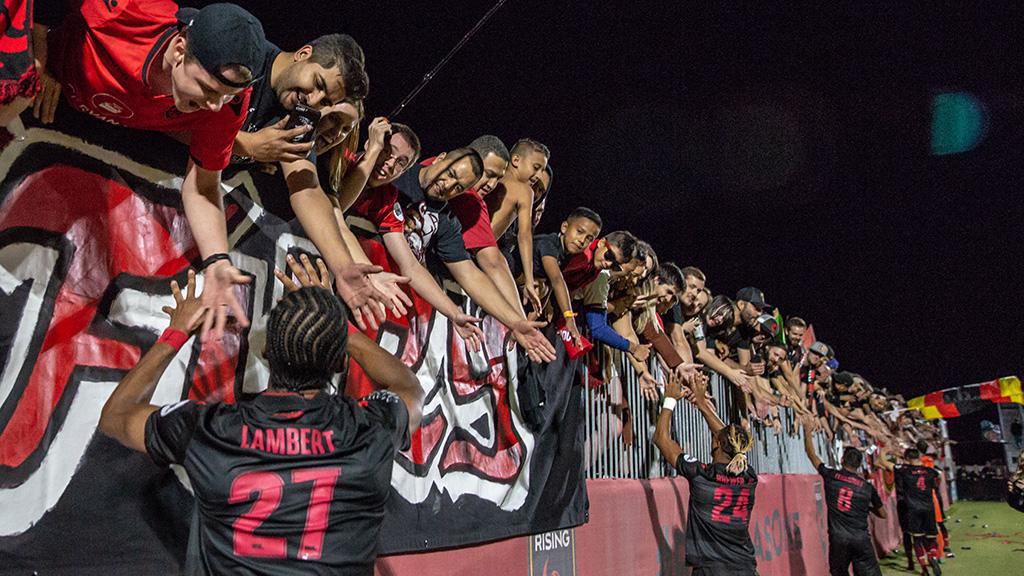 LOUISVILLE, Ky. – Their numbers might not be quite as vast as the hundreds that traveled to Orange County this past weekend for the Western Conference Final of the 2018 USL Cup Playoffs, but for many longtime soccer fans in the Phoenix region Thursday night’s 2018 USL Cup that sees their Phoenix Rising FC square off with Louisville City FC is a night they certainly couldn’t miss.

“This means everything,” said longtime fan Mon McPherson by phone on Monday. “Some guy on Twitter was saying ‘you guys are acting like you won a World Cup.’ Well, you know what? We’ve never won anything before, so Saturday was like winning a World Cup. The joy that I have walking into that stadium and watching the boys do everything to get that next trophy is overwhelming for me. I’m pacing. I can’t wait to fly on Wednesday, this day has gone so slow, and I didn’t even get back until last night from California, so I can’t wait to go.”

For McPherson and many others, the past two seasons have been a complete reversal of the way preceding years went in the valley of the sun, where teams struggled for relevance in the local market and struggled to break through on the field. Seasons came and went, postseasons were missed, and so were opportunities to more broadly engage with what some believed was an untapped soccer fandom that existed within the market.

The arrival in late 2016 of a new ownership group led by Berke Bakay heralded a new era, and even from the first encounters the longtime supporters had at a late-season Arizona United SC game against the LA Galaxy II there was a sense that things were going to be different moving forward.

“A few of them came out to the United game and talked to the supporters,” said supporter Steven Lopez. “I never really talked to them, but I could tell they cared. I saw a lot of potential in it, I saw a lot of good in it, and when I saw they were rebranding and renaming the team, I knew it was going to be something special. I think it was a mutual feeling across the board, and it’s been great, and it just keeps getting better as well. It’s amazing.”

From the moment of the rebrand that November, professional soccer in Phoenix has exploded. There was the introduction of the club’s new home – completed in 53 days before the opening game of the 2017 season – and while the first game in the club’s new colors didn’t go quite to plan on the field as Toronto FC II spoiled the party with a 1-0 win, it has been nothing but onward and upward since then.

Add in the arrival of Didier Drogba shortly after the season began, and the longtime fans began to see many new faces every time the club played at home.

“The excitement of something new here in the valley and looking forward to the new branding with new players,” said Blanca Ardon. “Obviously having Didier here, the legend, made a huge impact on the team and I think it brought a lot of new supporters to the club.”

One of those was Emily Rogowski, whose fandom of Drogba quickly made her latch on to Phoenix Rising FC from New York City. Having grown up a fan of Drogba’s when he played in Europe, Rogowski would travel to watch the Montreal Impact play when Drogba was with the MLS club, but while Drogba was what brought Rogowski to become a Rising FC fan, it was everything else about the club that made it something bigger.

“My love for the team definitely came from that, but I went to quite a few games last year and this year and I really fell in love with the whole organization, the fans, the players, the co-owners, the staff, everyone there. It’s a really good group,” said Rogowski, who flew from New York for the club’s past two postseason games in Phoenix and Orange County and is driving to Louisville for Thursday’s contest.

“It’s funny, actually,” Rogowski added. “Last year I went to see Phoenix Rising play and he actually wasn’t there because he was injured, and everyone was like, ‘how’s she going to take it?’ because it was no secret that he was definitely the reason I like the team, but I fell in love with the whole club and even without him there I still love the team whether he’s there or not and it’s still going to be a great team.”

That sense of family has been part of what has sustained the club’s more long-term fans. For Blanca Ardon, husband Oscar and their three children, gamedays at home and even on the road are “just fun because we’re creating memories with our family, we’re supporting our team and our friends, it’s just an experience I don’t think you get with any other sport.”

Blanca grew up in Phoenix a fan of Necaxa after her native home in Aguascalientes, Mexico, and Chivas, while her Honduran husband also had soccer in his blood from his upbringing. They’re now passing that onto their children, whose rituals the night before games are always similar.

“Gameday starts the night before with the kids being hyped up and counting down the hours and minutes, we usually get their gear ready,” said Ardon. “My son, he has everything from the scarf to the jersey to red shoes, everything red, it’s an exciting time.

“My seven-year-old, she absolutely loves the players, she knows them by name and she’s always like, ‘how are you guys?’ and she’ll bring signs for them. We just love them.”

Ardon, her family and Kristine Lantz were among those that made the trip when Rising FC visited Real Monarchs SLC earlier this season, with Lantz another who has seen the downs and more recent ups of the past six years of professional soccer in the region. From the times a few years ago of wondering if there would be a team to support the following spring to the current healthy state of the club, everything has come a full 180 thanks to Bakay and his strong leadership group.

“The commitment the ownership has shown to the fans has really gone both ways now to where the fans are really committed. Then you put a winning product on the field and the fans come. It’s really that simple,” said Lantz. “This batch of players, the brand of soccer, the speed we have on the field, the counterattacking, the all-out go get it, that’s a brand of soccer that is really attractive out here. It gets the fans excited, and the more we get excited the more they get excited, and the more exited they get the more they run. It’s going to be fun to see them take that to the Eastern Conference on Thursday night.”

Phoenix Rising FC Supporters - At Home and On the Road

Phoenix Rising FC's devoted followers have made the Phoenix Rising Soccer Complex one of the most exciting places to be on gameday, and traveled in big numbers to Orange County for the Western Conference Final of the 2018 USL Cup Playoffs last Saturday night.

Of all the club’s fans, though, McPherson is without question the most widely traveled, so much so that it was newsworthy when surgery the day of the club’s first home USL Cup Playoffs contest against the Portland Timbers 2 prevented her from being in attendance.

“That was horrible sitting there,” said McPherson. “That was the only game I think I missed this season. I had surgery that day and I’m sitting in my bed in tears screaming at my screen. I just wanted to be there so much, but they made it. A couple of guys said, ‘we did it for you, Mon, you know we need you to be back for the next one.’ They’re just such a good group, I can’t even tell you how good a group of guys this is.”

That connection between the fans and players has extended the feeling of family with the Rising FC organization. The longtime members of the squad like Carl Woszczynski – “Or as we call him, the Wonderful Wizard of Woz,” said Lantz – have formed a bond that has carried through the seasons and ensured that the newcomers to the team are aware of the importance of those relationships before and after games and away from the field.

Those relationships extend beyond the players, too, with Rising FC’s staff playing a major role in making sure the gameday experience and the club’s understanding of what its fans want has open lines of communication.

“The only way to build a good soccer culture and to get fans in the stands is to really let them know that you care for them, and the way that they know you care for them is that you’re reachable,” said Lantz, who serves as an administrator for the Red Fury. “Sam Doerr here, Jose Bosch on the social media side and Ever Valenzuela on the community relations, we have three guys that we know we can reach out to at any time if we need help [knowing] what can we take to Orange County, and beyond that we have an owner who is committed to working with the supporters’ groups.

“If Sam or Ever are not able to come up with a solution and we need to go one step higher, we know we can go to the owner and something will get done. If you want to build that soccer culture and a strong fanbase, you’ve got to have a front office that will take the time to be open with the fans and to answer questions and reach out.”

As the travelling fans converge on Lynn Stadium for Rising FC’s final game of the 2018 campaign – let alone the thousands that are anticipated at the Phoenix Rising Soccer Complex for the club’s official watch party on Thursday night – the promise of what’s to come is as great as the opportunity that lies before the side in Louisville.

“The boys are going to be buzzing,” said McPherson. “They’re so focused, Rick [Schantz has] done amazing with them, there have been so many changes, and the boys come out and give it their all every time they’re out there. I can’t ask for more. If they don’t give up and don’t quit, they have me heart and soul regardless, but I think they’re going to win.”