USL Cup Playoffs - Who to Root For - Favorites

Cincinnati looks for more silverware but faces challenges from Louisville, OCSC and Phoenix 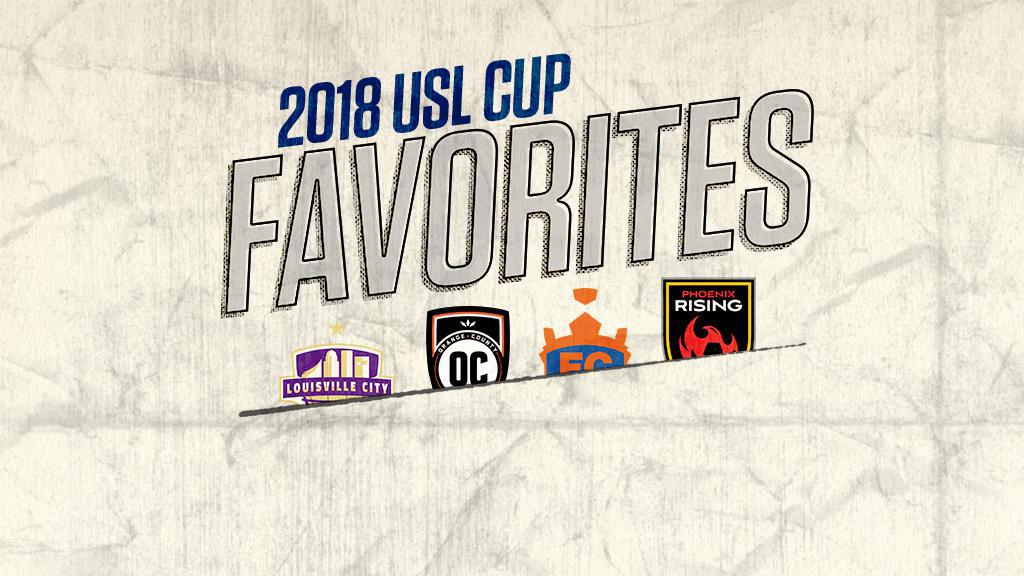 Continuing our series ahead of the start of the 2018 USL Cup Playoffs this Friday night that looks at the teams in the postseason field, we cast an eye to a group of sides that finished at or near the top of the regular-season standings, and one that will try to fulfill championship aspirations in 2018.

Player to Watch: Emmanuel Ledesma. The 30-year-old Argentine midfielder has had a standout season for the 2018 USL Regular Season Champion, scoring 16 goals and providing a USL-record 16 assists over 30 appearances. Ledesma’s lethal left foot has been especially potent from distance this campaign, as eight of his goals came from outside of the penalty area.

NBA Comparison: 2015-16 Golden State Warriors. Much like the 73-9 Warriors, FC Cincinnati enters postseason play on the back of a historic regular season. The club set the USL modern-era record for wins (23) and points (77) in a single season and finished the campaign on a 23-game unbeaten run that also set a league record.

While Cincinnati has dominated the regular season, the side will be acutely aware that the USL Cup Playoffs are an entirely different animal after falling in the Eastern Conference Quarterfinals each of the last two years. In 2016, FCC fell 2-1 to the Charleston Battery in opening round as the East’s No. 3 seed and the side failed to improve on that result last campaign with a 3-0 elimination at the hands of the Tampa Bay Rowdies. To avoid further comparison to the 2015-16 Warriors, Ledesma and Cincinnati will have to translate their stunning form into the postseason and avoid falling short of the ultimate prize like Stephen Curry and company.

This is your team if: You enjoy rooting for an odds-on favorite that still has the potential to be a feel-good story. Cincinnati’s class is undeniable, but with a USL Cup win the side would claim the city’s first sports championship since the Reds won the World Series in 1990.

Player to Watch: Cameron Lancaster. After scoring the game-winning goal in Louisville’s 2017 USL Cup success, Lancaster continued his fine form in 2018 on his way to claiming the USL’s Golden Boot with a league-record 25 goals.

NBA Comparison: 2012-13 Miami Heat. After winning his first NBA championship the season before, LeBron James led the Heat to another strong regular season and averaged 26.8 points, eight rebounds and over seven assists on his way to winning league MVP honors. Lancaster will surely be among the USL’s MVP candidates and will try to lead his side to a second straight title, like LeBron did in Miami.

Louisville City FC has avoided a championship hangover after capturing the USL Cup in 2017 as the side looks primed to make another deep playoff run. Louisville was the top-seed in the East on its way to the title last season and has reached the Eastern Conference Final in each of the previous two campaigns. With Lancaster leading the league’s second-highest-scoring attack (71 goals), Louisville will have a chance to match LeBron’s Heat and become the only team in the league’s modern era to capture the USL Cup in consecutive seasons.

This is your team if: You want to see a dynasty develop and enjoy watching prolific goalscorers find the back of the net.

Player to Watch: Thomas Enevoldsen. The 31-year-old Danish forward had a standout first season in the USL as he started all 34 matches for Orange County and led the side with 20 goals – tied for second most in the league. He also finished second on his team in chances created (63) and assists (9).

NBA Comparison: 2008-09 Los Angeles Lakers. A 30-year-old Kobe Bryant led his team in scoring with 26.8 points per game – good for third-best in the NBA – and helped Los Angeles claim the Western Conference’s top seed with a 65-17 record. The Lakers’ high-scoring offense carried the team throughout the postseason, culminating in an NBA Finals victory over the Orlando Magic.

Unlike those Lakers, Orange County doesn’t have quite the level of prior postseason success to draw back on as the side failed to make the USL Cup Playoffs in 2017. OCSC did stun Sacramento Republic FC as a No. 8 seed in 2016 before falling in the Western Conference semifinals for a second straight year. However, this Orange County side has a different look to it, having scored 70 goals – just two off the league lead – and conceding just 40. The only two sides with a better goal differential in the USL this season were FC Cincinnati (+38) and Louisville City FC (+33).

This is your team if: You want to see an impressive attacking side make the most of its talent and propel the club to new heights.

Player to Watch: Didier Drogba. The 40-year-old Ivorian striker wasn’t a consistent presence in the lineup during the regular season of what he says will be the final year of his playing career, but there’s no doubting the Chelsea FC legend’s quality when he’s playing. Drogba scored four goals and created 22 chances in eight games this campaign and led the line ahead of leading-scorer Chris Cortez down the stretch of the regular season. If given the chance to do so in the playoffs, Drogba will be tasked with leading Rising FC to its first postseason victory and beyond.

NBA Comparison: 2013-14 Los Angeles Clippers. A comparison to the Run-and-Gun Suns would be an easy one given the location, but a potentially more accurate assessment brings us immediately back to Los Angeles. These Clippers, like Rising FC, finished third in the Western Conference and showcased an impressive balance of talent on both sides of the ball with Chris Paul and Blake Griffin connecting on alley-oops to establish “Lob City”, while DeAndre Jordan protected the rim at the defensive end (and had his fair share of dunks, too). Los Angeles fell in the first round of the postseason the previous year but improved to reach the conference semifinals in 2014 before losing to an Oklahoma City Thunder squad that still featured Kevin Durant.

Phoenix Rising FC’s 2017 campaign came to a screeching halt in the opening round of the USL Cup Playoffs as the side lost out to the Swope Park Rangers in the lottery of a penalty shootout. After an impressive regular-season campaign saw the club sit in the West’s top-two spots for most of the year, Phoenix will be desperate to bury last year’s shortcoming and send Drogba into retirement holding the USL Cup. There is no doubt, though, that the pressure is on for this group to achieve success now before losing its big-name talent, much like the Clippers eventually did.

This is your team if: You want to see a legend go out on top. Drogba will be hanging up his boots after the postseason and the Ivorian would love nothing more than to end his playing career by adding another trophy to his already large collection.