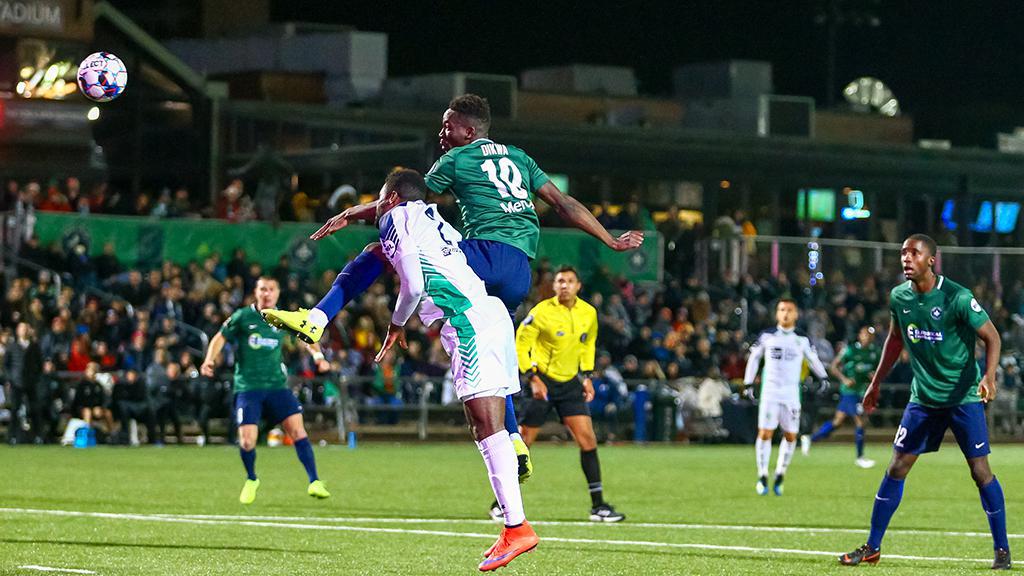 SAINT LOUIS – After missing out on postseason play in each of its first three seasons, the wait is finally over for Saint Louis FC as the club secured its spot in the 2018 USL Cup Playoffs with a 0-0 draw against OKC Energy FC on Saturday at Toyota Stadium – Saint Louis.

Having picked up three critical points on Wednesday in a 1-0 home victory over Tulsa Roughnecks FC, Saint Louis knew it needed just a draw against the already-eliminated Energy FC to put itself out of reach of San Antonio FC in the Western Conference standings. Playing out a scoreless draw wasn’t exactly what STLFC Head Coach Anthony Pulis had in mind, but in the end, he was happy with the performance and result despite some trying moments.

“[It’s] a relief, to be honest,” Pulis told the St. Louis Post-Dispatch after the match. “I would’ve loved to have won the game. [We] wanted to win the game to finish with a win and finish on 55 points but we got a clean sheet against a good team. I’m not going to lie, it was nervy at the end. To be honest, [I] wanted the referee to blow his whistle a little bit earlier. We did what we had to do; I thought it was really a disciplined, well-organized performance.”

Saint Louis let Energy FC retain possession of the ball for most of the contest but limited their opportunities moving forward as the visitors recorded just two official shots, one of which hit the target. The home side created a few more clear-cut chances, but OKC goalkeeper Bryan Byars was equal to efforts from Kadeem Dacres and Michael Cox on either side of halftime.

“We had two or three really good opportunities that we would’ve like to have capitalized on, but I think the important thing was to make sure we were organized and solid,” Pulis said. “We knew that if we got the shutout, we’d get the point we needed.”

Saint Louis goalkeeper Tomas Gomez made his only save of the night in second-half stoppage time, claiming Jaime Siaj’s header to seal his seventh clean sheet of the season and send the home crowd into a frenzy. After celebrating with the accomplishment with its fanbase, STLFC will have a week to regroup and prepare for Saturday when the side travels to face No. 1-seed Orange County SC in the Western Conference Quarterfinal.

“The excitement out there with the fans, it’s just an incredible feeling,’’ said STLFC defender Sam Fink. “I’ve experienced the highest of highs and the lowest of lows with those fans out there and this being such a special moment I wanted to celebrate it with them.”

IN WITH AUTHORITY: Like Saint Louis FC, the Swope Park Rangers only needed a draw on the final day of the regular season to earn a spot in the 2018 USL Cup Playoffs, but unlike their counterparts, the Rangers ended their campaign on a winning note with a 5-1 victory over the LA Galaxy II on Sunday at Children’s Mercy Park.

Wan Kuzain’s expertly taken free kick set the Rangers on their way in the 28th minute before Kharlton Belmar, Hadji Barry, Felipe Hernandez and Wilson Harris found the back of the net over a 50-minute span to give the hosts a convincing 5-0 lead. Substitute Jorge Hernandez ended Eric Dick’s shutout bid five minutes from time, but it was mere consolation for the Galaxy II as the home side marched back into the postseason for the third straight season.

“Obviously, the playoffs were on the line and it was a must-win game and we had that mentality going into the match,” said Belmar. “The boys responded well and came out to play and it showed with five goals. I think that’s our best performance of the year.”

Six minutes after Kuzain had given Swope Park the lead, Belmar doubled the advantage with a low finish at the near post after shrugging off the challenge from a defender. The goal brought the forward’s tally up to double digits for the season, but also ended a lengthy scoring drought that dated back to a match against Las Vegas Lights FC on June 24.

“It was very important for him to get that goal,” said Rangers Head Coach Paulo Nagamura. “I think he had a very good game, not only offensively, but also defensively. He worked his butt off defensively and helped the team in many ways. It was great to take that monkey off his back and score that goal. Now headed into the playoffs he will have much more confidence.”

Swope Park will begin its pursuit of a third consecutive USL Cup appearance when it takes on No. 2-seed Sacramento Republic FC on Saturday at Papa Murphy’s Park. Republic FC handed the Rangers a pair 3-1 defeats in their two previous meetings this season, but Barry hopes that Saturday’s win give his side the boost it needs to avoid a similar result this time around.

“You always want to get some type of momentum going before you hit the playoffs,” said Barry. “It’s going to be a fight, but I think we’re ready.”

STATEMENT VICTORY: Reno 1868 FC may not have improved its playoff seeding with a 3-1 victory over Orange County SC at Greater Nevada Field on Saturday, but the hosts believe they sent a message to the rest of the Western Conference ahead of the 2018 USL Cup Playoffs.

“Best team in the West is coming into our house and we kind of wanted show the league that we are a team they have to think about come playoff time, so I think tonight we showed that,” Reno forward Antoine Hoppenot said after the match. “I think we did a good job of putting them under pressure and I don’t think they saw that a lot during the season.”

The aggressive strategy worked as Reno won over 58 percent of its duels and intercepted 28 Orange County passes to frustrate the visitor’s attack, which entered the contest averaging better than two goals per game. Brenton Griffiths headed the 1868 FC into the lead in the 15th minute and Hoppenot scored on either side of Thomas Enevoldsen’s second-half strike for OCSC to claim three points for the hosts.

The victory was Reno’s fourth in its last five games and ensured the side would take its seven-game unbeaten run into the postseason. 1868 FC hasn’t tasted defeat since a 1-0 setback at Saint Louis FC on September 8 that put the side’s playoff hopes in jeopardy after a run of five points from seven games (1-4-2) but also served as a launching point for the team’s stretch run.

“When we lost in Saint Louis we all came together and said, ‘hey if we want to make playoffs and really make a run in the playoffs we got to get it together,’” said Hoppenot. “Since then we haven’t lost so it’s been a nice little run. Seven games without losing is the perfect way to go into the playoffs.”

Reno was the No. 3-seed in the playoffs last year but fell 1-0 to OKC Energy FC in the Western Conference Quarterfinal on its home turf. Goalkeeper Matt Bersano believes his side has learned from that experience and will be eager to turn the tables this time around when 1868 FC visits No. 4-seed Real Monarchs SLC on Saturday.

“Last year we got knocked out early, in the first round, and that hurt,” said Bersano. “There are people here who felt that and are hungry and there’s new guys here who want to show their stuff, so this is playoff football now.”