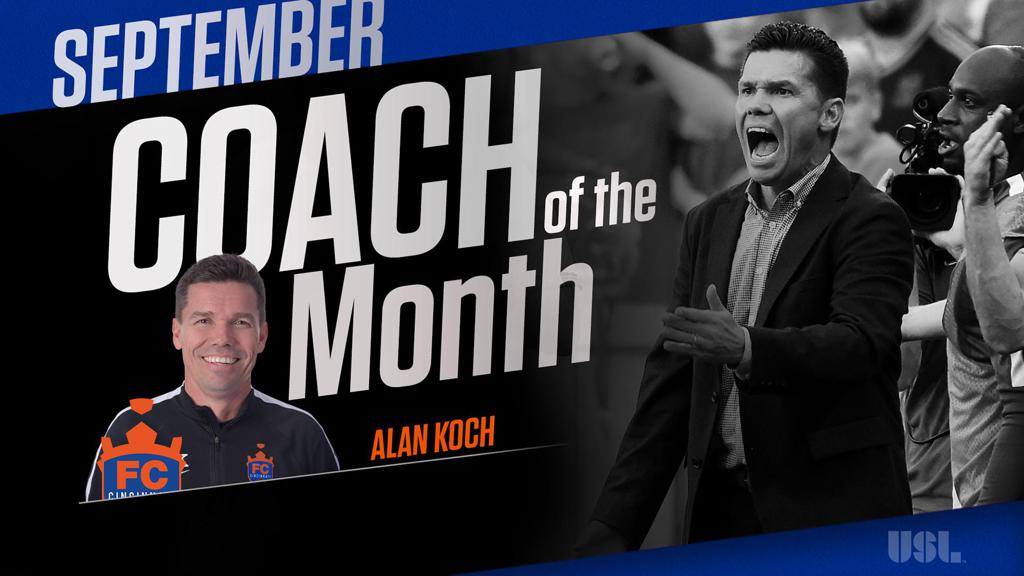 TAMPA, Fla. – FC Cincinnati’s Alan Koch has been voted the USL Coach of the Month for September, having steered FCC to six consecutive victories over the course of the month that saw the side claim the 2018 USL Regular Season Championship.

In his second season as FCC’s Head Coach, Koch has led the side to a historic year. Entering its final game of the regular season this Saturday night against Nashville SC, Cincinnati has already set USL modern-era single-season records for overall wins (23) and points (76), while the club’s perfect month of September contributed to a USL modern-era record 10 consecutive victories. Should the side avoid defeat against Nashville, it would set a new mark for the longest undefeated streak in the league’s modern era, having tied the Richmond Kickers’ record of 22 consecutive games without a defeat this past Saturday after a 0-0 draw with Pittsburgh Riverhounds SC.

In receiving the award, Koch paid tribute to the efforts of his players and staff that have helped pave the way for a remarkable year for the club.

“To be quite honest, there’s no such things as individual awards,” said Koch. “Every individual award is about the team, and that’s why we built a very, very special team this year. It took a lot of work in the offseason to put it in place. Little accolades like this for individuals are really a testament to our entire group, to our coaching staff, to our players, to everybody involved within our organization. It’s been a fun, historic year so far. We’ve enjoyed the successes and hopefully we can continue this down the road.”

Koch received 73 percent of the poll to claim the award ahead of Orange County SC’s Braeden Cloutier, who finished with 23 percent after leading his side to the top of the Western Conference with a 4-0-1 record over the course of September that saw OCSC score 15 goals over its five outings.