SAN ANTONIO – Knowing victory was essential to continuing the club’s realistic postseason hopes, San Antonio FC certainly didn’t get off to an ideal start on Saturday night when it conceded inside the opening 15 minutes against Las Vegas Lights FC at Toyota Field.

But a fightback that was led by a pair of goals by Ever Guzman and another goal and assist by Lance Laing ensured that SAFC would go to its final game of the regular season in play for a place in the postseason after a 3-1 victory before a crowd of 6,471 fans that moved the side into eighth place ahead of what will now be a tense final week of the regular season.

“We went down in the first ten minutes but the response from the players was fantastic,” said SAFC Head Coach Darren Powell. “We knew we could come out in the second half and play better than we did in the first, which I think we did, and the goals were executed well by the team.”

San Antonio’s backs had been against the wall before it began a three-game homestand last weekend, having suffered three consecutive defeats to drop out of the playoff positions in the Western Conference. Since then, almost everything has fallen the club’s way as in addition to its back-to-back victories on home turf the club also saw its two remaining rivals for the two remaining Western Conference playoff positions, the Swope Park Rangers and Saint Louis FC, suffer defeats that kept both clubs within reach.

While SPR and STLFC still hold an edge in the race for those postseason positions – Saint Louis plays a pair of home games in Week 31 knowing four points would be enough for a postseason berth, while Swope Park would secure its third consecutive playoff berth with victory next Sunday against the LA Galaxy II – San Antonio will be ready to pounce should either side falter. 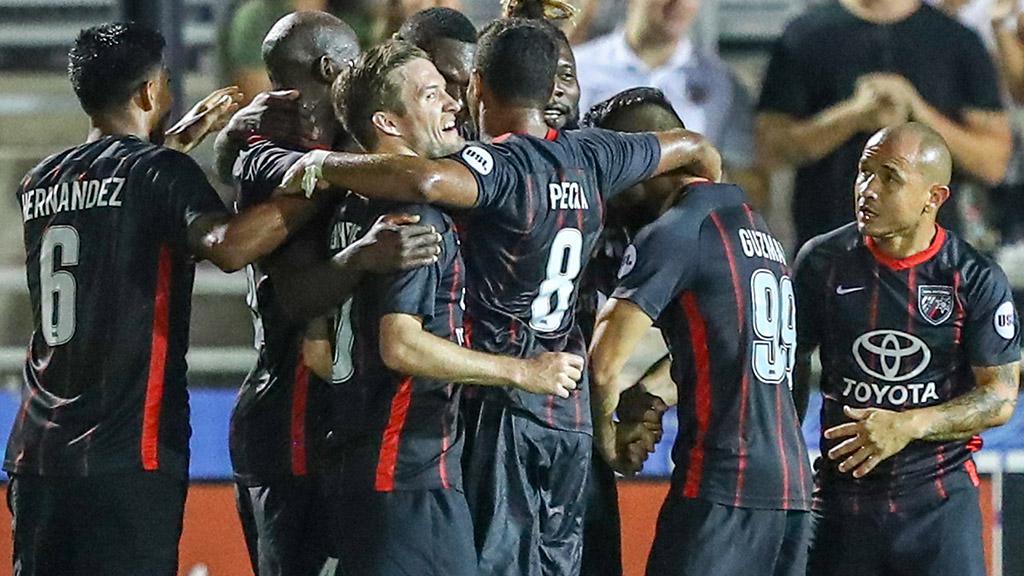 After Guzman reached double-digit goals for the season and Laing produced his fifth goal and fifth assist of the season, a third consecutive victory to round out the regular season certainly seems within reach. San Antonio’s 34th-minute answer to Sammy Ochoa’s opener for the visitors was a beautifully constructed move that saw 17-year-old Ethan Bryant link up with Guzman to release Laing down the left side, and Guzman arrived at the perfect time to put home a first-time finish on Laing’s low cross to level the score.

The Mexican forward added his 10th goal of the season three minutes into the second half as he cut past his marker on the left side of the penalty area before firing home at the near post before Laing popped up with his now-customary goal to go with his earlier assist, firing low into the right corner from the left side of the penalty area with 10 minutes to go after having earlier hit the crossbar.

“When knew coming into this game that we recently went on a bad stretch with three loses in a row, and we decided as a team that we are in no position to lose another one,” said Laing. “Obviously, we have to take it one game at a time, and so far, that’s been good for us. We have one more game and we just have to win it.”

San Antonio’s fans, players and staff will now turn their attention to Wednesday night’s game between Saint Louis FC and Tulsa Roughnecks FC hoping the Oklahoma side can upset the odds and end STLFC’s six-game home winning streak, which would open the door a fraction wider ahead of next Saturday’s South Texas Derby against Rio Grande Valley FC.

With the Toros on an improved run of form recently, taking a third win in their last four games against the Roughnecks on Saturday night, victory for SAFC is by no means a sure thing, but the side is at least thankful it will have the chance to put itself into the postseason with all three points.

“The team showed some good resilience and focus to turn it around after going down. Hopefully that’s enough,” said Guzman. “We’re waiting for results around the league but we’re hoping they go our way, and we have to do what we need to do to control what we can.”