COLORADO SPRINGS, Colo. – As he received the upfield ball from teammate Josh Suggs, there was an initial plan of attack for Colorado Springs Switchbacks FC’s Saeed Robinson, then a secondary one, and then a tertiary one as Real Monarchs SLC’s defense tried to converge and close out a clear sight of goal.

“I wanted to go straight but the guy caught up to me, so I had to cut back,” said Robinson. “Then I saw another guy, so I cut back again and then I saw the goal and I shot.”

As it turned out, Plan C did the trick.

Robinson’s perfectly-struck, curled finish picked out the bottom-right corner of the net in the 87th minute to lift the Switchbacks to a 1-0 victory against Rocky Mountain rival and the current Western Conference-leading Monarchs at Weidner Field on Wednesday night to keep the club’s slim hopes of a third trip to the USL Cup Playoffs in four seasons alive.

“That's a huge win for us,” said Suggs. “At this point in the season, every win is big. But, especially to win one against Monarchs because they're the first-place team, obviously they're a quality side, so it means a lot.” 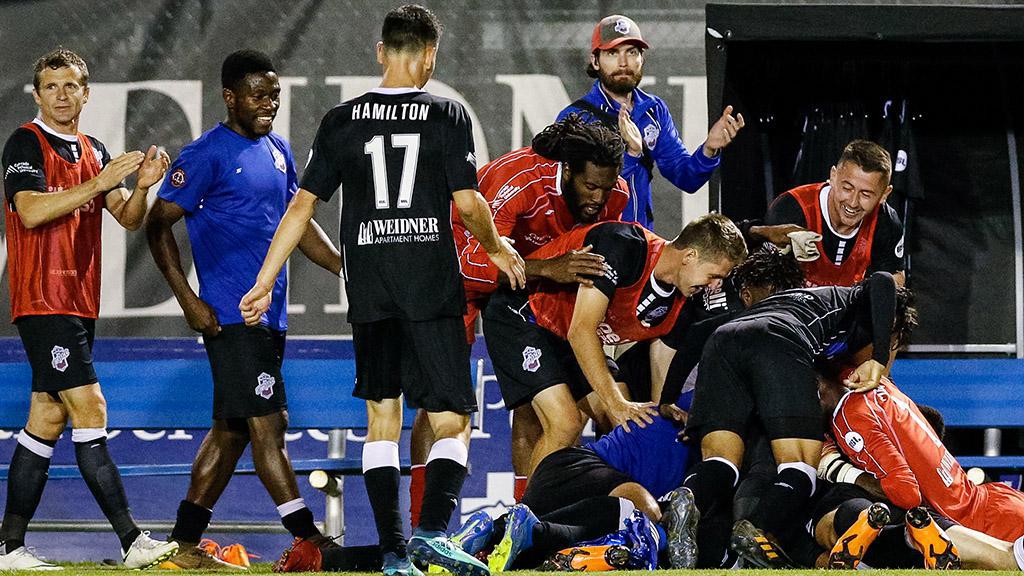 In a tightly-fought matchup the Switchbacks had put the ball in the net more than once prior to Robinson’s finish, only for the offside flag to be raised on each occasion. Marty Maybin’s sharp first-half finish came after the Northern Ireland forward had strayed just too far forward, while Jamal Jack’s close-range finish from inside the six-yard area that redirected a blocked effort by Robinson was also ruled out.

With the Switchbacks fighting for their playoff lives, the curtain almost fell at the other end with eight minutes to go as the Monarchs’ Andrew Brody rang the crossbar with a blistering finish from 20 yards after cutting in from the left side. In the end, though, Robinson’s finish was the one that mattered, drawing plaudits from his teammates.

“Saeed really made the goal, all credit to him, to be honest,” said Suggs. “I saw him making the run and I played the ball, but the guy did a lot by himself. I think all the credit goes to him.”

As big as the Switchbacks’ victory was on the night, it was still tempered by results elsewhere. Victories for the Swope Park Rangers and San Antonio FC and a draw for Saint Louis FC – all of whom Colorado Springs is chasing for a potential playoff berth – meant the side was able to keep its head above water, but still sits five points back of the eighth and final playoff berth currently populated by STLFC after Wednesday’s action.

That means this Saturday night’s visit to the LA Galaxy II at StubHub Center is also a must-win, but at least for one night the dream stayed alive for Head Coach Steve Trittschuh’s side.

“It's a good win against the top team in the league,” said Trittschuh. “That's just one step forward that what we have to do. We've got a lot more wins to go. I thought they played well tonight, especially against a lot of odds. But the guys kept their head down and did well tonight.”