TAMPA, Fla. – New York Red Bulls II forward Tom Barlow has been voted the USL Player of the Week for Week 24 of the 2018 season. Barlow scored a second-half hat trick after being brought on as a substitute for the Red Bulls II to lead the side back from a three-goal halftime deficit to earn a 4-4 draw with the Charleston Battery on Saturday night at MUSC Health Stadium. 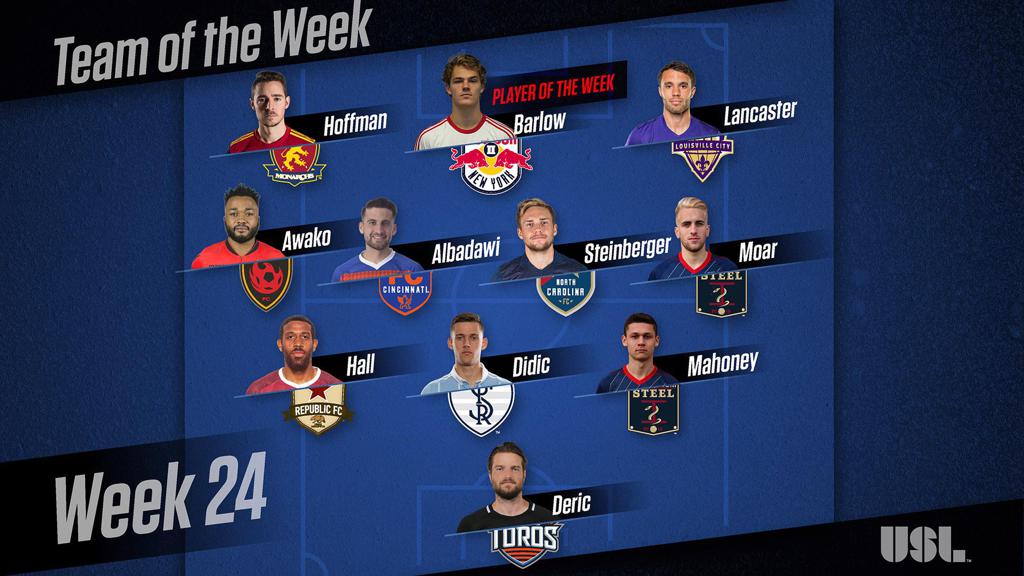 GK – Tyler Deric, Rio Grande Valley FC: Deric recorded a seven-save shutout on the road to lead the Toros to a 2-0 victory against Orange County SC for the club’s first road win of the season on Saturday night.

D – Amer Didic, Swope Park Rangers: Didic scored what proved to be the game-winning goal, won six of eight duels overall, completed 54 of 59 passes and recorded seven clearances, as the Rangers took a 2-1 win on the road against San Antonio FC.

M – Zach Steinberger, North Carolina FC: Steinberger had two goals and one assist in his debut for North Carolina, as it swept to a 6-2 victory against the Charlotte Independence on Saturday.

F – Chandler Hoffman, Real Monarchs SLC: Hoffman recorded a second consecutive brace and added an assist to lead the Monarchs to a 4-0 victory against the LA Galaxy II on Saturday night.

F – Tom Barlow, New York Red Bulls II: Barlow scored a hat trick after coming on as a second-half substitute, as New York rallied from a three-goal halftime deficit to draw 4-4 with the Charleston Battery on Saturday.