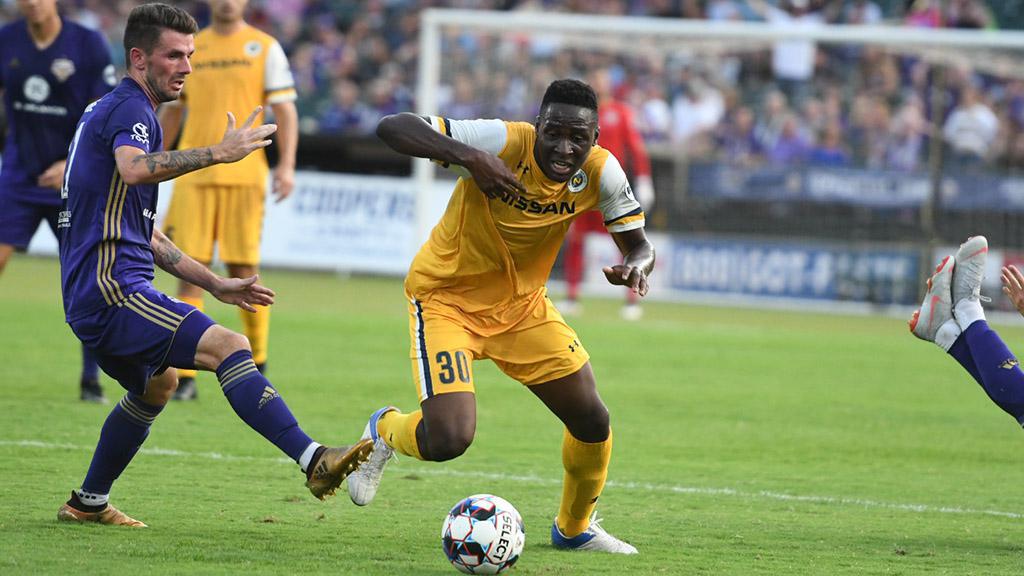 LOUISVILLE, Ky. – In terms of a means to measure where you side stands in the big picture, a visit to Louisville City FC is currently among the bigger tests a side can undertake in the USL, so the fact that his Nashville SC side was able to emerge from Saturday’s visit to Slugger Field with a point after a 0-0 draw between the teams was certainly pleasing to NSC Head Coach Gary Smith.

“From where we were at the start of the season here, the growth the group showed and the lessons we have learned was fantastic,” said Smith after Saturday’s contest. “This is a tough place to play. I think any teams that come here expecting to outplay Louisville are really mistaken. We got it right tonight. The group showed the right attitude. They worked tremendously hard all night. We for the most part disrupted their play. It was a tough local rivalry. I am absolutely delighted that the guys have shown that sort of character.”

Given the hoopla surrounding the contest, not only with it serving as the fourth meeting between the regional rivals but also as the first game on the sideline for new Louisville Head Coach John Hackworth, Nashville certainly had to withstand pressure as its hosts held a 19-8 advantage in shots. They were turned away by another stellar display from goalkeeper Matt Pickens, who finished the night with five saves, and some good defensing otherwise that saw Nashville record its second consecutive shutout.

“We did alright,” said NSC defender Justin Davis. “Anytime you give up a chance you always question it, but Matt [Pickens] took care of us back there, he made some big saves. Start of the second half they had a few good looks. We just tried to limit them, it’s what we do best.”

The draw, however, kept Nashville below the playoff line in the Eastern Conference for the time being, but the side has plenty of opportunity to right that in the coming games. With fellow playoff contender Bethlehem Steel FC visiting this Saturday night, one of seven home games in the final 11 overall this season, Nashville is ready to make its move and ensure its inaugural professional season ends with a place in the postseason.

“It was vital to keep the small unbeaten streak alive,” said Smith. “Now we have to take advantage of the home games on the schedule. We have some games in hand on some teams. But games in hand are worthless unless you convert, and we will need to convert on those. With 11 games to go there are plenty of twists and turns left this season. We will be playing teams in and around the playoff hunt and that will add some pressure. We need to keep our feet firmly on the ground.” 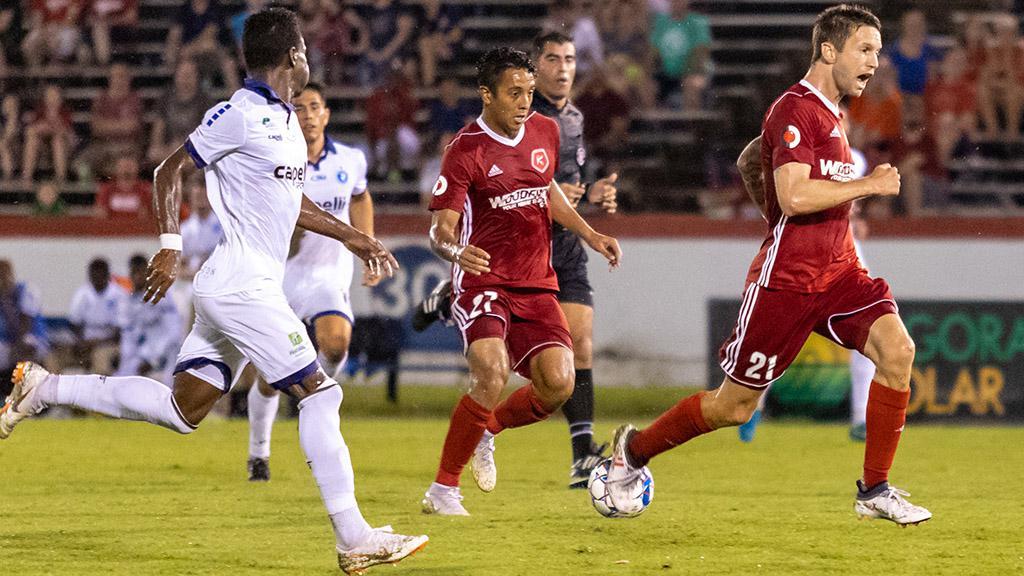 KICKERS GET NEEDED BOOST: A place in the USL Cup Playoffs is likely out of reach for the Richmond Kickers this season but picking up a 3-2 victory against Penn FC on Saturday night at City Stadium gave the side something to feel positive about as it looks to finish the regular season in strong fashion under new Head Coach David Bulow.

In a topsy-turvy contest the Kickers needed a late winner from Fred Owusu Sekyere to take all three points, but the fact the side was able to put up three goals on the night after being held scoreless in each of its past five outings offered some hope for the stretch run.

“It’s huge,” said Kickers attacking midfielder Brian Shriver. “Obviously, we have been through a rough patch this past season, the past six or seven games, and doing what we had to do to get back on this winning streak here at home is huge. The game was great, I thought we performed fantastic, and we really gave the fans something good to take away from.”

The Kickers will face big tests in the coming weeks with Louisville City FC the visitor this Saturday night before a road trip that sees Richmond visit both Nashville SC and Indy Eleven, but the goal for Bulow is to keep building the framework that is going to bring long-term success back to the club next season. After the positive performance against Penn, Bulow is starting to see the patterns of play he believes can bring victories.

“I’m asking to create a certain type of goal, and I need them to look for it and it’s their job to make sure it happens,” said Bulow. “The third goal especially was exactly what we have been talking about the past couple of weeks, and that has been the missing piece, getting into the final third. I thought in Ottawa we were very good at getting into the final third, we just were not clean enough in our execution and today I thought we were much better.” 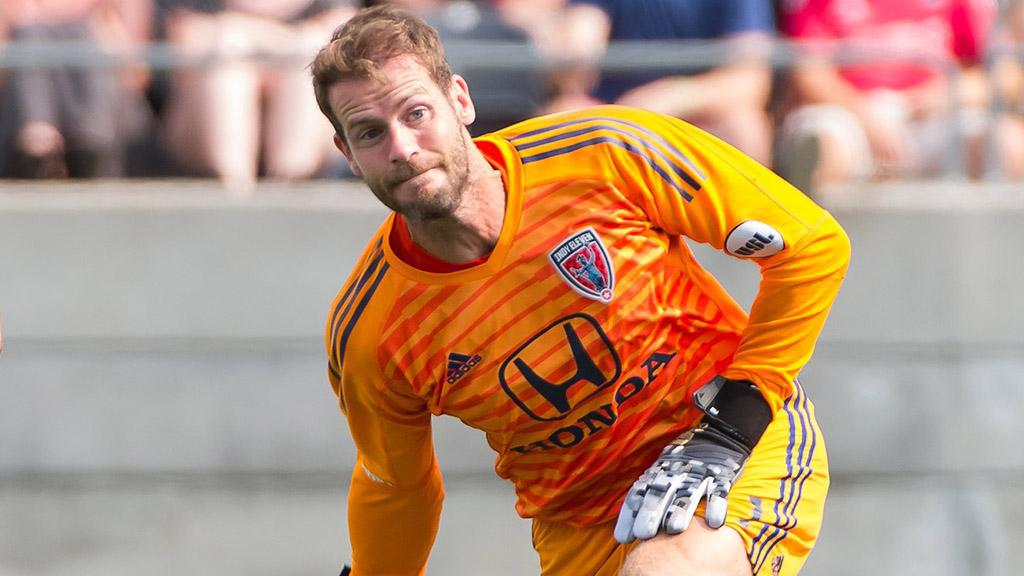 FÔN WILLIAMS FITS THE BILL: Indy Eleven maintained its place in the playoff positions on Saturday afternoon with a 0-0 draw against Ottawa Fury FC at TD Place, and once again it was goalkeeper Owain Fôn Williams who grabbed the spotlight with a three-save performance that saw the Welshman record his ninth shutout of the season.

Sitting with a 67.9 save percentage this season with 57 saves overall, a total that puts him 12th in the league overall, the veteran shot-stopper has more than lived up to expectations this season for Indy Head Coach Martin Rennie, who was full of praise for the 31-year-old following the game.

“I was looking for an experienced goalkeeper who could organize the game well, who could deal well on crosses and make big saves when we needed them,” said Rennie. “I think he [Owain] has done all of those things, but he’s also been a really positive figure off the field and really helped build the culture and build the team. I think he’s done well beyond the expectations we were hoping to meet.”

AROUND THE EAST: There was certainly a level of frustration for Pittsburgh Riverhounds SC on Saturday night as the side failed to break down a Charlotte Independence side that played the final half-hour with 10 men, but after the game Head Coach Bob Lilley was looking straight ahead. “We just told the guys, ‘look, it’s disappointing, all we can do is get ready for Tampa and try to get the three points against Tampa before we go out on the road,’” said Lilley. “Charlotte deserves credit for defending well the whole game.” … Even with the team on a 13-game undefeated streak, with matches this week against both ATL UTD 2 and the Tampa Bay Rowdies there’s little time for FC Cincinnati to reflect on the great form the club is in right now. “It’s been a great run,” said FCC midfielder Corben Bone after the 3-0 win against the Charleston Battery. But after a win, you celebrate that night and it’s on to the next one. We’re looking forward to another two games this week.”