CHARLESTON, S.C. – As brightly as the Charleston Battery’s Nico Rittmeyer has played at times this season it was no surprise when the second-year midfielder finally produced his first professional goal on Saturday night in the side’s 3-0 victory against the Richmond Kickers at MUSC Health Stadium.

In fact, as well as Rittmeyer has played this season it was a surprise to Battery Head Coach Mike Anhaeuser that he hadn’t found the net previously this regular season.

“I didn’t realize it was his first professional goal,” said Anhaeuser. “I thought he had a few others. I guess he’s been scoring a lot in practice. It was great to see him get his first goals here tonight. I gave him the opportunity because we’re going to need to have squad rotation over the next couple of weeks and he made it pay.”

Rittmeyer scored four goals in preseason for the Battery this spring and had logged a pair of assists this season prior to Saturday night’s win. He was clinical with his opportunities against Richmond, especially on his first goal of the night that saw him produce a precise low finish to the right corner that curled around Kickers goalkeeper Travis Worra to find the net after Rittmeyer had been played in by O’Brian Woodbine. He added his second just before halftime before Ataulla Guerra notched his 12th goal of the season in the second half to take the lead in the race for the USL Golden Boot.

As the Battery took their fourth consecutive victory to move into second place in the Eastern Conference standings, Rittmeyer said Guerra’s standout season was opening up for the rest of Charleston’s attack as the club continues its drive for another trip to the USL Cup Playoffs. 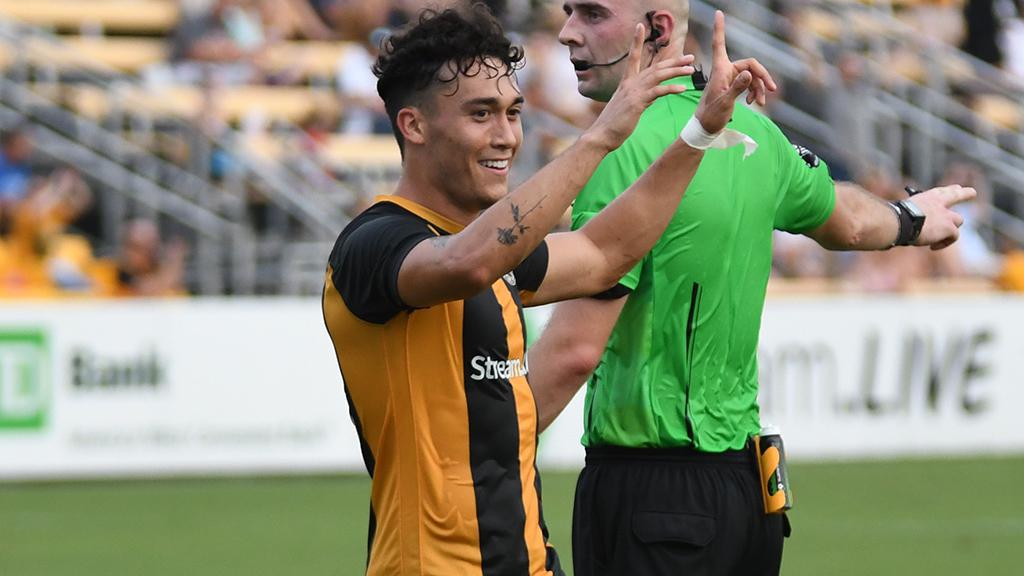 Charleston's Nico Rittmeyer scored the first two goals of his career for the Battery in the club's 3-0 victory against the Richmond Kickers. | Photo courtesy Arthur Ellis / Charleston Battery

“We have guys who can step up at any time,” said Rittmeyer. “We have Ataulla and Gordon [Wild] who are great up front and then we have guys that can step up and score when needed. Ataulla and Gordon have been great up front, but we’ve gotten goals from everywhere. That shows that if someone isn’t scoring someone else can step in, which can help take some of the pressure off those guys. Other teams are keying in on Ataulla and that’s opened things up for the rest of us.”

NO EXCUSES FOR FURY FC: Ottawa Fury FC may have been coming off short rest after its game on Wednesday night in the 2018 Canadian Championship, but the club was disappointed with its overall display in a 3-0 defeat to Louisville City FC that snapped a two-game winning streak and sent the team below the playoff line in the Eastern Conference.

“There's no excuse about this result today,” said Fury FC goalkeeper Maxime Crepeau. “Recovery is a part of it. Obviously, it's difficult [with the heavy schedule] but there's no excuse about it, because the best teams in the world are playing every three days. Recovery will be important because we can't afford results like this anymore.”

Ottawa is still in a relatively good position thanks to other results over the weekend, which saw only North Carolina FC take victory among the teams vying for a playoff place between seventh and 13th place in the Eastern Conference and left Fury FC a point back of the eighth-place Charlotte Independence with two games in hand. The defeat to Louisville did amp up the pressure for this Friday night’s game at TD Place with the Tampa Bay Rowdies, however, with the Florida side sitting only a point further back in the standings.

“It's a good race right now,” said Crepeau. “Every team is tight, every team is good, we're in a league where every game is important, and no one knows who will actually win. So, it's important to bounce back and get our confidence back.”

ROWDIES PROUD OF CHARACTER: The Tampa Bay Rowdies had plenty of questions regarding Junior Flemmings’ red card in first-half stoppage time in its 2-2 draw with the New York Red Bulls II on Saturday night at Al Lang Stadium, but the players were also pleased with the effort the side showed to still take a point from the game despite being down to 10 men throughout the second half against a potent visiting attack.

“We have guys with a lot of personality, a lot of charisma, a lot of character,” said Rowdies forward Stefano Bonomo. “To find that second wind and fight through it when a man down, knowing it was going to be a battle, credit to all 10 guys and all the subs who came in the game. It was great stuff.”

Bonomo had struck twice in two minutes for Tampa Bay against his former club to cap a wild opening 10 minutes that had seen the visitors take the lead before the Rowdies roared back. With three goals in his past two games, Bonomo is now one away from 25 regular-season goals in the USL for his career, a mark he’ll be hoping to hit in the side’s key game against Ottawa Fury FC this Friday night.

AROUND THE EAST: Nashville had to battle travel issues prior to its 2-0 defeat to Toronto FC II on Saturday night, but while that may have hindered the side’s preparations, Head Coach Gary Smith was again disappointed with the execution the side showed on the road against the Eastern Conference’s last-place side. “What we are seeing is a marked difference between what we are getting at home and what we are getting away,” said Smith, whose side is now 2-5-4 on the road this season. “Away from home we have looked a very different side. A change is something for me to consider.” Nashville faces a trip to FC Cincinnati next. … Pittsburgh Riverhounds SC Head Coach Bob Lilley thought his side paid the penalty for a slow start in its 2-1 defeat to North Carolina FC. “I don’t think we were ready to put the work in early in the game and it was one of the reasons we were doing a lot of chasing,” said Lilley. “That catches up to you at some point. [North Carolina] only scored one goal in the first half but our defense was breached more than it usually is. We were fortunate to only be down one goal at half.” … Bethlehem Steel FC Head Coach Brendan Burke was delighted by his side’s 4-1 victory against ATL UTD 2 on Sunday evening, which saw Aidan Apodaca, Faris and Brenden Aaronson all score their first professional goals for the club. “That just makes the day fun and one that you’ll remember,” said Burke. “There probably won’t be many more of those, if any, this year but it’s a tough thing to replicate in the future.”