Hounds remain upbeat despite defeat to Battery; FCC’s Ledesma closing in on record 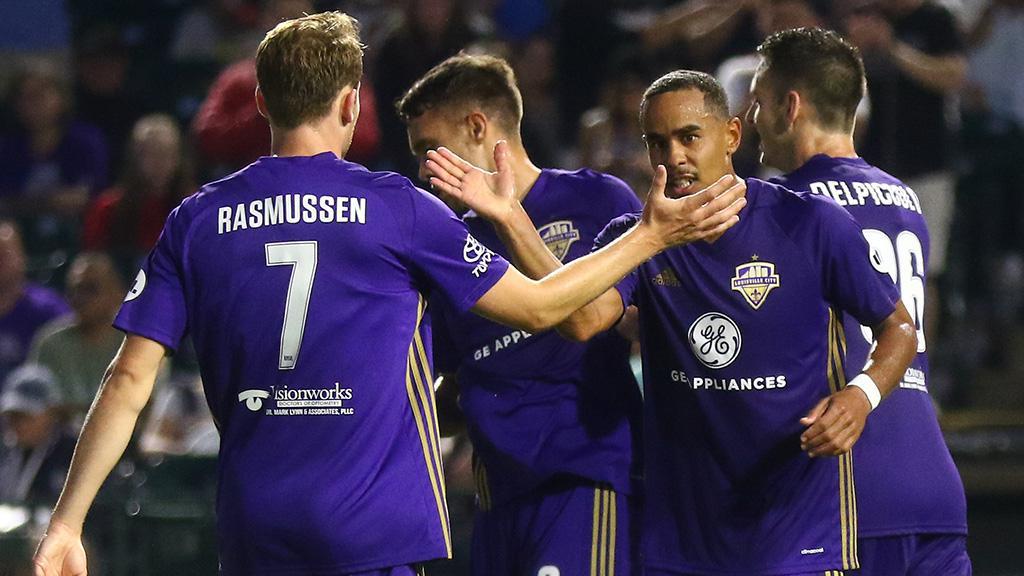 LOUISVILLE, Ky. – There wasn’t necessarily an added urgency for Louisville City FC on Saturday night, but in its first home game since the departure of former Head Coach James O’Connor taking a 4-1 victory against the Charlotte Independence in front of a crowd of 8,006 at Slugger Field certainly provided some sense of relief.

“I’ll tell you what, it feels really good,” said Louisville forward Ilija Ilic. “It’s our first home game with our players-coaches and I think we did really well. We came out starting the first minute and controlled the game for 90 minutes. They scored that last goal but you forget about that. You look at the whole picture and we should be happy with it.”

Ilic provided a goal and assist on the night, setting up Niall McCabe for the game’s opener in the 21st minute before putting home a penalty kick with 18 minutes to go that sparked a run of three goals in 15 minutes for the hosts as their pressure on the Independence defense paid off. After the disappointment of the past week – especially the side’s deflating defeat to the Chicago Fire in the Lamar Hunt U.S. Open Cup – getting a strong response reaffirmed some belief that Louisville’s train won’t be derailed easily.

“To go through this situation with a coaching change – you’re away at Tampa, you’re away at Charleston, you’re away at Chicago – those were three tough games in a tough situation,” said player-coach Luke Spencer. “We kept that perspective and we know our capabilities so we really just talked about the belief in each other. We know we’re good players and it showed tonight.”

HOUNDS REMAIN UPBEAT: Suffering a tough late defeat to one of your rivals near the top of the Eastern Conference could have been a difficult one for Pittsburgh Riverhounds SC, but Head Coach Bob Lilley said he was pleased with the performance his side put in after its 1-0 loss to the Charleston Battery in front of an engaged crowd at Highmark Stadium.

“I am happy with the chances we created – that’s soccer,” said Lilley. “It would have been awesome getting the three points today. This was maybe the best game we played all year, we just didn’t come out with the win.” 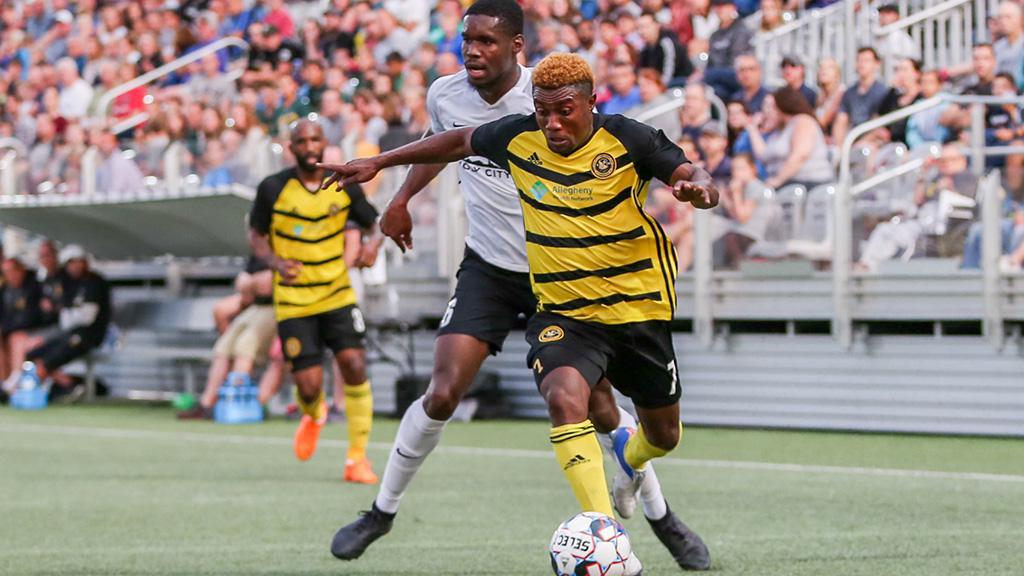 Riverhounds SC certainly didn’t get the bounce of the ball on the night as Christiano Francois twice hit the woodwork in the first half before Neco Brett had a penalty kick saved early in the second. The saved penalty kick by Battery goalkeeper Joe Kuzminsky ended up as the turning point in the game as Atualla Guerra grabbed all three points for the visitors.

With a full week to prepare for a stretch of three games in eight days that starts next Saturday against North Carolina FC, getting back in the right frame of mind is going to be at the forefront of the Hounds’ focus.

“The key to being a pro, you have to have short-term memory,” said Riverhounds SC midfielder Kenardo Forbes. “We have to sulk tonight and get over it tomorrow. We have to come back ready for practice Monday.”

RECORD IN SIGHT: With two assists in FC Cincinnati’s 2-1 victory against the New York Red Bulls II, Emmanuel Ledesma is pulling into view of a USL single-season record.

The first player to reach double-digit assists this season, the Argentine is now only two back of the league’s single-season assists record of 12, held by Matt Dallman of Pittsburgh Riverhounds SC, who set the current mark in 2013, and Reno 1968 FC’s Chris Wehan, who equaled it a season ago. With the ability Ledesma’s has shown so far this season to deliver for his teammates, it wouldn’t be surprising to them to see him far exceed the mark.

“All year round, the delivery that [Emmanuel] Ledesma’s got, you know, he put it on [the button] for me,” said FCC defender Paddy Barrett after being the recipient of Ledesma’s 10th assist of the season. “I just needed to get it into the corner, to be honest.”

BRINGING THE BELIEF: Ottawa Fury FC had outshot Nashville SC 6-3 in the second half going into the final 10 minutes of their contest at TD Place when the visitors were awarded a penalty kick, but when Alan Winn’s shot came back off the crossbar it spurred Fury FC’s players belief that the game was theirs for the taking.

So when Tony Taylor finished off a sharp chance in the first minute of stoppage time to pave the way for a dramatic 2-0 victory that also included a spectacular insurance marker by Kevin Oliveira which moved Ottawa into seventh place in the Eastern Conference standings, the turning point of the game was clear for both sides. 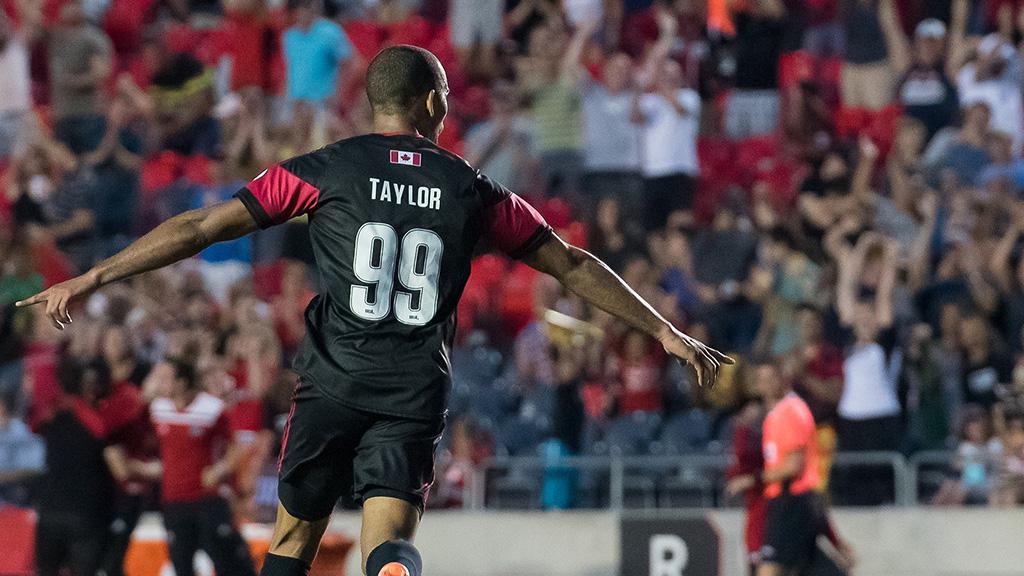 “I think that when they missed the PK we believed more that we could win the game,” said Oliveira. “I think we deserved it more than Nashville, we did more, we controlled the game. We had a lot of opportunities. When we got them on the counterattack, it was a good chance to shoot, so I gave it my best and it was a good goal! But I’m more happy about the three points and the win.”

“I thought honestly we were getting stronger and stronger and looked the side more likely to win it when we were given the penalty,” added Nashville SC Head Coach Gary Smith. “When you miss that penalty, after the incredible effort we gave, it has a negative mental effect.”

AROUND THE EAST: Indy Eleven Head Coach Martin Rennie was philosophical after his side’s 3-1 defeat to the Tampa Bay Rowdies, which saw the side suffer its third loss in its past four games in an increasingly-tight middle of the Eastern Conference playoff race. “A big thing for us is that this is a really tight week and we’re in a good position,” said Rennie. “We need to make sure that we learn each time from when we’re not getting things right that we need to bounce back quickly. If you get on a little run of wins, you’ll jump right back up to the top of the table.” … North Carolina FC took a needed 3-1 victory against Toronto FC II on Saturday, but now faces a key moment in its season with third-place Pittsburgh Riverhounds SC and the second-place Charleston Battery the next two visitors to Sahlen’s Stadium at WakeMed Soccer Park. “We’ve got to get points, yeah,” said NCFC Head Coach Colin Clarke. “I’ll be disappointed if we get less than four. We’re at home, and we have to win those games They’re not easy. Both teams have got a lot of talent. Certainly, we feel confident we can beat them both, but they’re both playing very well and tough teams.”