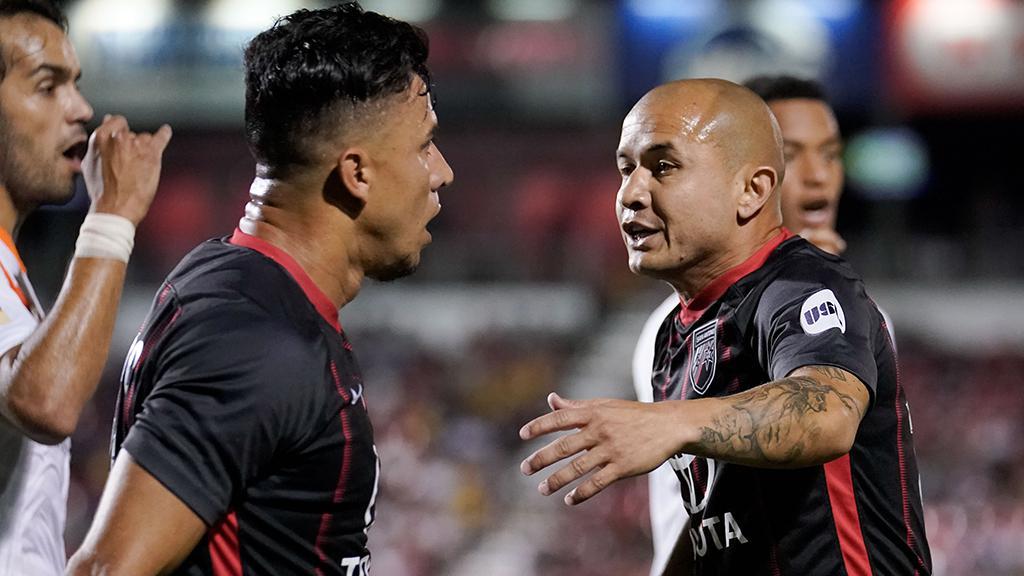 SAN ANTONIO – San Antonio FC welcomes Western Conference-leader Real Monarchs SLC to Toyota Field on Saturday night (8:30 p.m. ET | Match Center | ESPN+), but the lofty position of their opponents hasn’t had much bearing on the manner in which SAFC’s players have prepared this week for what sets up as a big game for the hosts.

“Their position in the standings is irrelevant to us as a team,” said San Antonio midfielder Charlie Ward. “We look at every opponent the same, whether they’re in first or last place, we’ll treat them with respect. We’re looking to win every game and it’s important to get a win at home in front of our fans and get on a good run. There are 17 games left and we have time to really do something with our season and make a push for the playoffs.”

While that may be the case, San Antonio’s loss on the road last Saturday night to Orange County SC has ratcheted up the pressure on the club’s postseason hopes. While SAFC still has four games in hand on eighth-place Fresno FC, the side now has to make up a six-point gap in the Western Conference standings after the Foxes’ three-game winning streak.

With SAFC having not held a lead in a game since its last victory against Sacramento Republic FC on June 16 after rallying to earn a point in its two draws in the club’s current four-game winless streak, getting the opening goal on Saturday night would be a welcome confidence boost to a side that is tied for the fewest goals scored in the Western Conference this season.

“Every game in this league is tight, and obviously goals change that,” said SAFC Head Coach Darren Powell. “We want to make sure we come in organized, and I’m sure they’re doing the same. There are a lot of quality teams in this league, so we expect every game to be a tight one.”

ORANGE COUNTY MAKES STATEMENT: Squaring off with the two-time defending Western Conference champion on Wednesday night, Orange County SC was looking to add a statement performance to what already looks like a playoff resume for the club this season.

After pulling away for a 4-0 win against the Swope Park Rangers, OCSC Head Coach Braeden Cloutier believes his side accomplished just that.

“We have played the top teams in our league and we have not gotten the result, but we played very well,” said Cloutier after the victory at Children’s Mercy Park. “We knew coming into tonight we wanted to make a statement saying we are for real and have a go at a top team. I think we did that tonight.”

With goals from four different players – including an 11th on the season for Thomas Enevoldsen that put the Danish forward into sole possession of the league-lead – Wednesday night’s display added to some of the other impressive attacking displays Orange County has put in this season. Now leading the Western Conference with 36 goals ahead of this weekend’s action, the side built on a 3-0 victory last Saturday night against San Antonio FC, a contest that Cloutier believed helped his side prepare for the challenge the Rangers would pose.

“San Antonio played very similar to how Swope plays,” he said. “We changed our system up just a little bit and we worked on it last week and it worked very well against San Antonio and we just carried it over to tonight.”

“Saturday is 100 percent a must-win,” said Maybin. “We slipped up [against Sacramento], so this weekend is even more important now. We need to pick up points in every game.”

The defeat saw the Switchbacks slip out of the top eight in the Western Conference as Fresno FC moved into the playoff positions with its 4-0 victory against Phoenix Rising FC. The pressure on Colorado Springs to produce now is higher than on others, too, with the side having only 13 games remaining in its regular season including the game with the Roughnecks.

With the likes of 10th-place Saint Louis FC and 11th-place San Antonio FC each holding multiple games in hand on the Switchbacks, Head Coach Steve Trittschuh’s side not only has to regain its position on the Foxes, but also hope the sides below them don’t produce a surge that would carry them higher as well.

“We have to be ready,” said Trittschuh. “This week we’re working on keeping our tempo up, pressing high, and that tempo has to stay high this weekend. All our games are must-win for us now. All are important. Right now, we need to get people healthy and move on from Sacramento. We’re still not aggressive enough in the area and that has to change for us to score. We’ve just got to keep a positive attitude and keep working this week.”

AROUND THE WEST: After going almost more than a year without a loss at home, Swope Park Rangers Head Coach Paulo Nagamura wasn’t all that happy with the way his side played late on in its 4-0 defeat to Orange County on Wednesday night, the club’s second loss in a row at home. “After we took the second [goal], I think the guys fell asleep there and it was just a lack of concentration, lack of effort and lack of committing to finish the game strong,” said Nagamura. Look for a more engaged display on Sunday against Rio Grande Valley FC. … Phoenix Rising FC’s Chris Cortez has already notched a career single-season best eight goals this year, so what’s gone into that improved performance? “Everyone talks about being opportunistic,” Cortez said in a video posted to the club’s Twitter account. “That’s half of it, and the other half comes through repetition of seeing tons and tons of crosses and perfecting how to finish those crosses.” Rising FC will be hoping to add to its 34 regular-season goals when it hosts Seattle Sounders FC 2 on Friday night.