Who gets your vote at the midway point of the season? 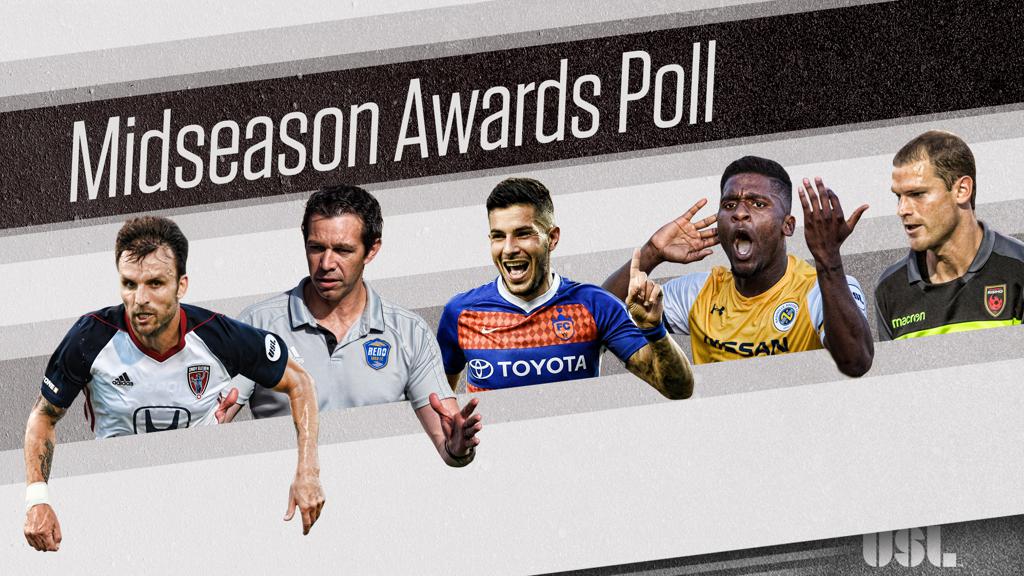 The 2018 USL Regular Season reached its midway point last Saturday night, when more than 18,000 fans packed into Nissan Stadium to see Nashville SC play host to FC Cincinnati in the 280th game of the 561-game schedule – a game that was part of the second-highest attended week in the USL’s modern era. With numerous standout performances across the league, both on the field and on the sidelines, we’ve selected our nominees for the USL Midseason Awards for you to cast your ballot for which player or coach should claim the 2018 Fans’ Choice USL Midseason Award in five categories.

GOALKEEPER OF THE YEAR

Maxime Crépeau, Ottawa Fury FC – Crépeau has already picked up an individual award this season, claiming the USL Player of the Month award in May after not conceding a goal throughout the month, and that has contributed to an excellent season overall for the Canadian international in which he’s recorded 42 saves and a save percentage of 75.0 while notching eight shutouts for Fury FC in his season-long loan from the Montreal Impact.

Matt Pickens, Nashville SC – As the first professional signing in club history, Pickens was made the figurehead for Nashville SC as it began its new era, and the veteran shot-stopper has not disappointed. Tied for the league-lead with nine shutouts, Pickens has made 44 saves while recording an 81.48 save percentage, with a number of those stops adding to the 36-year-old’s already-extensive highlight reel.

Dan Lynd, Pittsburgh Riverhounds SC – It will come as no surprise that Lynd has put up some eye-popping numbers since following Head Coach Bob Lilley to Pittsburgh, but it would sell the 24-year-old goalkeeper short to say that he’s a beneficiary of the Hounds’ overall defensive strength. Tied with Pickens for the league-lead with nine shutouts, Lynd has recorded an 80.0 save percentage and made some game-saving stops for his side in an impressive season overall.

Andre Rawls, Orange County SC – The California native has thrived during his loan stint from New York City FC with Orange County, with his 57 saves putting him third in the league in that category. Despite having a high volume of shots to stop, though, Rawls has maintained an outstanding 82.61 save percentage and notched seven shutouts in 16 appearances for OCSC.

Carl Woszczynski, Phoenix Rising FC – The veteran made the No. 1 jersey for Rising FC his over the course of preseason and has had arguably the best season of his USL career in 2018 with an 81.13 save percentage that has seen Woszczynski record seven shutouts and 43 saves. Now in his fourth season in Phoenix, Woszczynski’s seven shutouts are already a single-season high as he has backstopped Rising FC to an outstanding 2018 so far.

DEFENDER OF THE YEAR

Sean Totsch, Louisville City FC – In his second season at the club, Totsch has claimed added prominence on Louisville’s back line with an excellent work rate that has led to him recording 116 recoveries – tied for second among defenders – while also winning 122 of 190 duels – the second-most duels won by a defender this season – 34 of 43 tackles and 70 of 92 aerial duels.

Taylor Hunter, Colorado Springs Switchbacks FC – Hunter has put up some impressive numbers on the back line for the Switchbacks this season, including a league-leading 61 interceptions among defenders – 10 more than his closest competition – and sitting tied for the league-lead with 33 successful tackles. The former Houston Dynamo player has also registered 110 recoveries and has recorded only 14 fouls in 20 appearances while having yet to receive a yellow card this season.

Ayoze, Indy Eleven – The Spanish veteran has been one of the most essential two-way players in the league this season, not only providing solid defense for the Eleven with 107 recoveries while winning 110 of 174 duels but also recording four goals and five assists to help the club’s attack. Three of Ayoze’s assists this season have come via set pieces, while he has also proven a valuable change-up option when the side has been within shooting range on free kicks.

Ken Tribbett, Penn FC – In his return to the club, Tribbett has been influential at both ends of the field in helping turn Penn into a playoff contender this season. The club’s captain has recorded four goals that derived from set pieces, placing him second on the team in that category, and at the back, he has been a model of consistency, having won 100 of 147 duels and 71 of 93 aerial duels while recording 47 interceptions, tied for fourth among defenders.

Brent Richards, Reno 1868 FC – Richards has continued to play a key role for Reno as a two-way threat down the flank that came naturally from his days as a forward, recording two assists and 16 key passes this season, while adding greater defensive presence for 1868 FC back line. His 116 recoveries are tied for second among defenders this season, while his 44 interceptions put him on pace to easily surpass his total of 67 from a season ago.

COACH OF THE YEAR 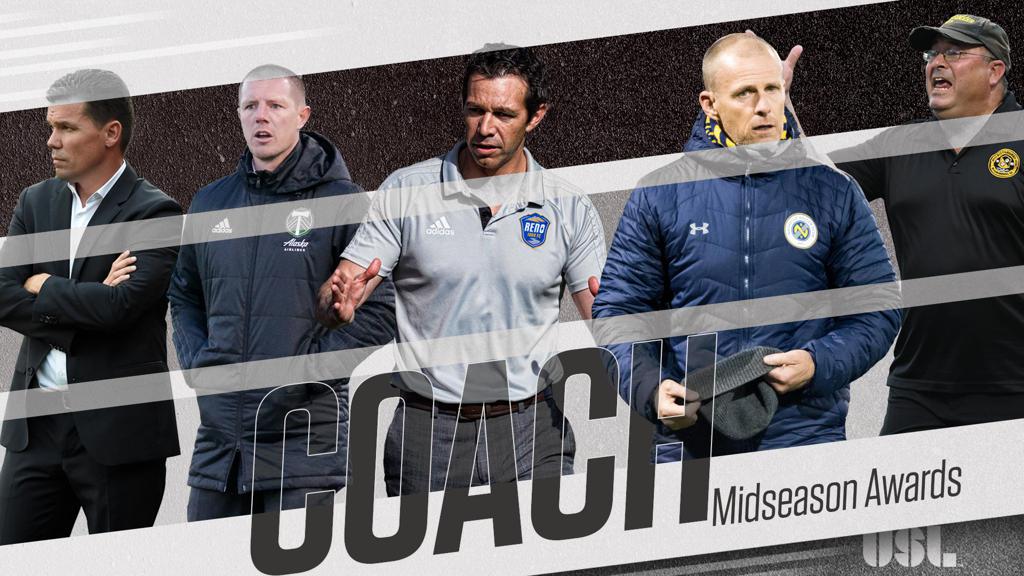 Bob Lilley, Pittsburgh Riverhounds SC – Arriving this offseason, Lilley has put Riverhounds SC on course not only to rewrite the club’s history book but also challenge some of the USL’s modern-era records as well. With a 9-1-7 record, the Hounds enter the second half of the season in second place in the Eastern Conference, having conceded fewer goals (7) than they have recorded shutouts (12) in 17 games.

Ian Russell, Reno 1868 FC – Russell’s leadership helped 1868 FC overcome a slow start to the season, as the club produced a league-best 15-game undefeated streak to move into a top-three place in the Western Conference. 1868 FC sits tied for sixth in the league this season with 28 goals, fifth in the league with 250 shots and fourth in chances created with 205, as the entertaining brand of soccer that carried the side in its inaugural season has continued in to the club’s second year.

Alan Koch, FC Cincinnati – Expectations were high for FC Cincinnati going into the season, and those have certainly been met in the first half of the season with the club sitting on top of the Eastern Conference with the second-highest-scoring attack in the USL. Koch has been important to that success, making sharp in-game adjustments that have helped his side sit tied for the second-most wins in the league.

Gary Smith, Nashville SC – Leading the club into its first professional season, Smith built a rock-solid defense that has allowed Nashville to immediately put itself into playoff contention with a top-five spot in the Eastern Conference. Having conceded only 10 goals in 16 games, Nashville still has room to grow in the second half of the season, but with victories against Louisville and Pittsburgh already, the club has impressed consistently so far.

Cameron Knowles, Portland Timbers 2 – Taking over the club with the worst record in the league in 2017, Knowles has instilled a greater sense of belief within T2’s squad that has allowed its young players to flourish so far this season. The club has almost tripled its win total from a season ago in the first half of the season and is in with a chance at its first trip to the USL Cup Playoffs in its history as a result.

YOUNG PLAYER OF THE YEAR

Efrain Alvarez, LA Galaxy II – The 16-year-old phenom has had a spectacular first full season in the USL, recording eight goals at a rate of a goal every 60.5 minutes while also becoming the youngest player to score a hat trick in the USL’s history. A member of the Mexico Under-17 National Team, Alvarez has caught major national attention with some spectacular finishes that have helped power a high-scoring Los Dos attack.

Augustine Williams, Portland Timbers 2 – A member of the USL 20 Under 20 a year ago, Williams has continued to progress with T2 this season, having already notched a single-season high of four goals while adding two assists to help Portland make a solid run at its first trip to the postseason. The 20-year-old has also recorded seven key passes as part of an overall passing accuracy rate of 73.9 percent.

Ropapa Mensah, Nashville SC – Mensah was a known quantity from his time at Penn FC a season ago, but with four goals and three assists, the 20-year-old Ghanaian has quickly become a fan-favorite for Nashville SC’s rabid fan base. Mensah has also recorded nine key passes this season and produced arguably the most memorable moment of the club’s first professional season so far with his dramatic late winner against North Carolina FC.

Brian White, New York Red Bulls II – The 2017 Premier Development League Most Valuable Player has picked up where he left off for the New York Red Bulls U23 last summer in his first professional season, recording six goals and three assists for a New York attack that leads the league in scoring. White has also recorded 18 key passes, which have highlighted his versatility in leading the line for a talented cast surrounding him.

J.T. Marcinkowski, Reno 1868 FC – The former U.S. U20 international has made a strong impression on loan with Reno from the San Jose Earthquakes in his first professional season. Marcinkowski has recorded 47 saves, good for seventh in the league, and has posted four shutouts and a 70.2 save percentage in his 16 appearances for the club.

Thomas Enevoldsen, Orange County SC – Enevoldsen has been one of the best additions of the offseason, with the Danish striker having played a key role in Orange County’s strong first half to the season. Tied for the league-lead with nine goals, Enevoldsen has also contributed four assists and recorded 33 key passes for his new club.

Emmanuel Ledesma, FC Cincinnati – The Argentine veteran is the only player in the USL to sit in the top eight in both goals and assists, with his eight helpers putting him tied for the league-lead at the midway point of the season. Having also scored eight goals, Ledesma has been a driving force for one of the best attacking the league over the season’s first half.

Solomon Asante, Phoenix Rising FC – What the Ghanaian playmaker lacks in height at just 5-foot-2 he more than makes up for in creativity, with a league-leading 66 chances created for one of the most explosive attacks in the league. Asante, himself, has notched six goals and six assists for the highest-scoring attack in the Western Conference, which has helped the side to a top-two position midway through the season.

Kharlton Belmar, Swope Park Rangers – Belmar moved into the top 10 in the league’s all-time goal-scorers list this season, averaging a goal every 89.9 minutes to sit tied for the league-lead on nine goals this season in just nine games through Week 17. The 2015 USL Rookie of the Year has also notched two assists for the Rangers, who again are among the West’s playoff contenders, and has made three appearances for Sporting Kansas City this season.

Neco Brett, Pittsburgh Riverhounds SC – The Jamaican has had a breakout year for the surging Hounds, with his eight goals already an individual single-season high at the midway point of his first season in Pittsburgh. A key figure in Riverhounds SC’s retooled attack, Brett has also notched three assists this season, meaning he’s played a decisive role in more than half the Hounds’ 21 league goals in 2018.