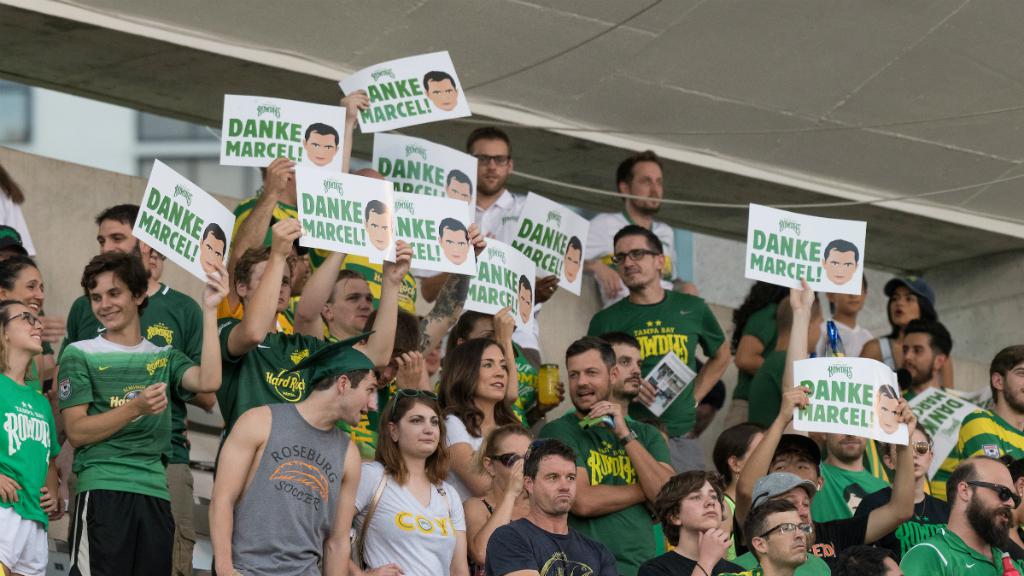 ST. PETERSBURG, Fla. — The Tampa Bay Rowdies said goodbye to midfielder Marcel Schäfer against Penn FC on Friday night as he made his 45th and final appearance in the club's colors before returning to Germany to become the Sporting Director at former club VfL Wolfsburg. But while the former German international's time with the Rowdies spanned only a season-and-a-half, the impact he had on the club for which he earned USL All-League First Team honors last fall is one that all of those who played and worked alongside him will feel for a long time.

“I think it’s been well documented how well he has done on the field. He’s one of the top midfielders in the league in terms of his assists and the quality of his left foot,” said Schäfer's former teammate and current Rowdies Head Coach Neill Collins. “Off the field has not been as well documented, but from a club point of view he’s been huge, he’s been fantastic in the dressing room and a fantastic person to work with. We’ll all miss him on and off the field.”

While it was only a short time with the Rowdies, Schäfer was pleased with the impact that he had on the club and the adventure that he had.

“It was a huge experience for me, it was really a gift for my family and me and we are really proud of that,” said Schäfer. “Everyone in the world has dreams but now we made the step in the U.S. and we are really really proud. It is a lot of work, everybody who has three kids knows what it means to move, that’s really a lot of work, but I’m so proud.”

Three weeks ago the German’s plan was to see out the season but his opportunity to start the new stage of his career at the club he spent more than years as a player was too exciting to pass up. But while he departed Al Lang Stadium as a player for the final time this weekend, Schäfer hinted that he will be a visitor at the club as time allows in the future.

“I think there’s no doubt that this is a great opportunity for me to be a Sporting Director for a Bundesliga club, especially at my age, especially for the club of my heart where I played over 10 years,” said Schäfer. “I have to say I am and was really proud to be a part of the Rowdies family and this is definitely not the end, it’s just the start of a great new relationship. It’s a great thing that I’m young, so I may be able to come back so many times. Our offseason is a different offseason than the Rowdies so I will definitely come back soon to Al Lang Stadium.”

WHOLE SQUAD GETS OTTAWA BIG WIN: In a match where Adonijah Reid scored the first hat trick in Ottawa Fury FC's professional history, Head Coach Nikola Popovic was notably enthused not only with the performance of the 18-year-old but of that of his team as a whole in Sunday's 3-0 victory against the New York Red Bulls II at MSU Soccer Park.

In a performance that pulled Fury FC closer to the playoff positions against one of the sides it is trying to pass for a place in the postseason, the collective manner in which the side performed got Fury FC back into the win column for the first time this month.

“We’re very happy to have these boys so connected as a team and be able to produce such a fantastic performance. I cannot individualize anybody,” said Popovic, right after Reid’s hat trick. ”I think the most valuable player of this group is the team, the whole team, from the 11 on the field, to the other players on the bench and at home that want to be part of this, that want to be part of it.”

Having been on the road since its opening game of the month against the Charlotte Independence, June has seen Ottawa pile up some hard miles on the road. That's meant Popovic has needed to lean on his depth more often in trying to keep Fury FC moving forward, with Reid's performance coming in the absence of the likes of fellow forward Steevan dos Santos.

“We have to do a great job managing the players, avoiding injuries, which is at a higher risk when you travel so much and play so many games with such a short time for recovery,” said Popovic. “We are trying to avoid any damage to our roster.”

As one of only two teams in the USL's Eastern Conference to pick up three points this weekend, Popovic was pleased with the way his side executed its plan against the Red Bulls II. In handing New York only its second home loss of the season while picking up its second away win, Ottawa kept itself in touch with the battle for position in the middle of the conference standings.

“We are very proud of our players. For them to play this way was a very good exhibition,” said Popovic. “Everything went the way we analyzed the opponent, and they followed the strategy that we built for this game very well.”

SHIFTING FORMATIONS KEY FOR NORTH CAROLINA: Down by a goal with 25 minutes to play, North Carolina FC was looking for something that would pull it back into Saturday night's contest with Louisville City FC.

Posting a shot differential of 10-1 against the defending USL Cup champions, the tactical adjustments the side made in an effort to put pressure on Louisville's midfield paired with the introduction of attacking midfielder Tiyi Shipalane paid off in a 2-2 draw that produced a late equalizer by Daniel Rios for the hosts.

“Pretty much when we were attacking, we were 4-4-2. When we were defending, we were more of a 4-1-4-1, where either Daniel [Rios] or [Marios] Lomis would drop in and become that fourth midfielder,” said NCFC Head Coach Colin Clarke. “It worked out being more Lomis. When we did win the ball, it put him in a good position to pick balls up in good pockets of space and start the play. They play a little different – they’ve got that box in the middle – and we thought it was the best way for us to deal with it, and to hurt them as well.”

North Carolina gained possession six times in Louisville's half over the closing stages of the match, which allowed the hosts to sustain their pressure on the City FC goal. The way NCFC closed out the game saw it get back into a similar pattern as the opening 35 minutes, something Clarke thought his side got away from as Louisville surged to take the lead with goals either side of halftime. City FC had recorded only two blocked shots before Paco Craig's 39th-minute header leveled the score, but that finish gave the visitors momentum going into the halftime break.

“We stopped passing the ball toward the end of the first half. I thought we were very good for the first 30-35 minutes, and then just gave a few sloppy ones away; tiredness started to set in,” said Clarke. “You know, it’s a set play [Louisville’s first goal] that could have been avoided, so I was disappointed with that. But they were lively second half and got the goal, but I thought we responded magnificently.”

The response after Ilija Ilic's goal just before the hour-mark provided an alternate ending for NCFC this season, though, with the hosts having given up six goals after the 80th minute to drop points this season. While there's still a lot of work to be done with the side sitting seven points out of the Eastern Conference playoff positions, the 87th-minute Rios equalizer may well mark a turning point for the side.

“It shows our character. In the past, it’s been the other way around. We’ve given up goals late,” said NCFC midfielder Steven Miller. “We didn’t put our heads down after we went down 2-1. We stayed positive and we controlled the game in the second half. We battled and got the draw and we could have gone for the win at the end too.”