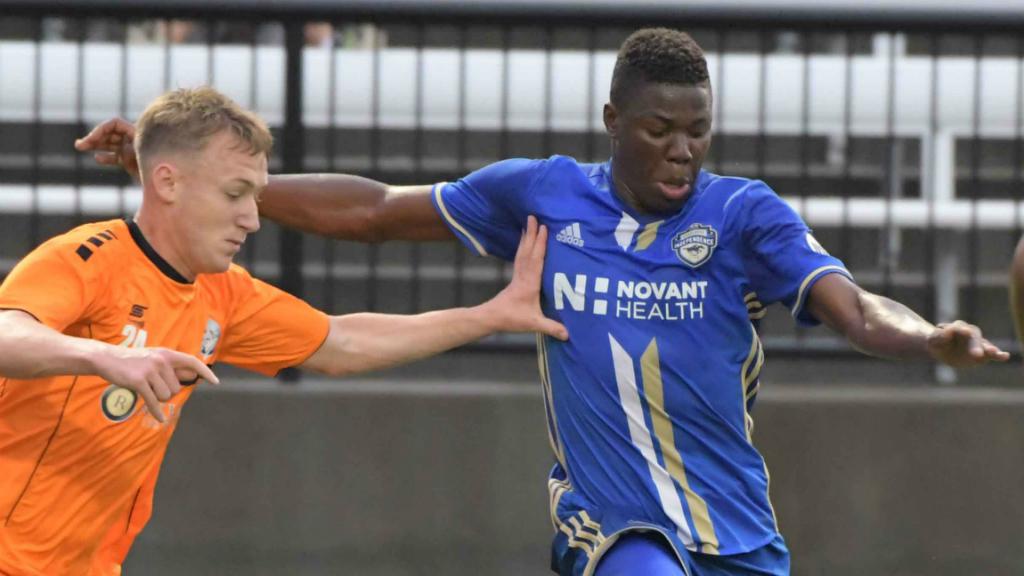 CHARLOTTE, N.C. – Charlotte Independence rookie defender Calvin Doum has earned a call-up to the Cameroonian Under-20 National Team for two African Cup of Nations qualifying matches against Mali on July 13th and 20th, and while that's unlikely be a hindrance for the Independence's solid back line the club is pleased that the 18-year-old is getting an opportunity on a wider stage for his country.

“It's good for him because he's trained hard and I think he's made tremendous strides since the beginning of the season,” said Independence Head Coach Mike Jeffries. “I think he's got a good future because he's such an athletic and physical player.”

Doum signed for the Independence in February as the club looked to add youth to an experienced backline that could push those experienced players like Bilal Duckett. Doum has played 45 minutes in the Lamar Hunt U.S. Open Cup this season, but is part of a growing trend around the USL that is looking to identify young talent from overseas that could not only potentially contribute on the field but also turn into a valuable commodity in the future.

“We made the commitment to some younger players who were – for a lack of a better word – projects or development-type players,” said Jeffries. “Calvin certainly fits that; guys who have a big upside. It's important to the club to have a few guys that come through the system and do move on to good careers elsewhere. It helps the club in being noticed and prestige and, obviously, financially as those players move on.”

Doum is part of a big number of young foreign players earning national team call-ups. Among others is Toronto FC II midfielder Gideon Waja, who last year earned a call-up for the Ghanaian National Team in a friendly against Congo, while players like current Seattle Sounders FC defender Nouhou Tolo is another Cameroonian who originally signed with S2 before making the move up to the club's MLS squad.

Another African teenager, ATL UTD 2’s Laurent Kissiedou of the Ivory Coast, could well be following him to a U20 national team in the future. The 19-year-old Kissiedou has impressed in his first 11 games for Atlanta this season, scoring two goals and managing seven key passes, while 18-year-old Congolese forward Michee Ngalina has recorded two goals and one assist in 11 games for Bethlehem Steel FC.

CHARLESTON ANTICIPATE HOME BOOST: The Charleston Battery are winless in five matches, which has dropped the team down to eighth place in the USL Eastern Conference going into this weekend's action. Coming off a three-game road trip that concluded with a 1-1 draw last Saturday against the Charlotte Independence, the Battery's return home this Saturday to play Pittsburgh Riverhounds SC at MUSC Health Stadium (7 p.m. ET | Match Center | ESPN+) provides some hope for the Battery.

“Bottom line is we’re going to have to be good to beat them, but the good thing is we’re at home and we’re very good here,” said Battery Head Coach Mike Anhaeuser. “We seem to be a little sharper here than when we’re on the road. We’re prepared for them. They’re a good team. I know [Riverhounds Head Coach] Bob [Lilley] is going to come in here defensively organized. He’s probably going to try to sit back a little bit, especially since it’s this warm, and he’s probably going to try to hit us on the counter-attack. We have to be ready for it.”

With Bob Lilley at the helm, Riverhounds SC has adopted the same defensive tenacity that was evident in his previous stops as a Head Coach. Pittsburgh has faced a league-fewest 28 shots on goal this season, and has conceded only seven goals in 13 games, which will make life tough for the Battery, but Anhaeuser has been around the league for a long time and has done his homework.

“They’re a team that will knock it around. They’re going to defend well; it’s Bob Lilley,” said Anhaeuser. “But, they have some offensive weapons as they showed last game. They have a Jamaican duo up there with Neco Brett and Romeo Parkes. They can get in behind and they use their physical ability to open you up. If you try to press them, they use their physical ability to catch you on the counter-attack and it hits you pretty hard.”

Pittsburgh pushes its wingers forward in attack which can create trouble for a lot of teams but for the Battery, there is confidence that the club's regular game plan that features a defensive back three and a pair of wing backs that look to push upfield will work to break down the Hounds' defense.

“The game plan will remain the same,” said Battery defender Neveal Hackshaw. “We will adjust to their attack at first and feel them out, but we’re going to remain the same and play our game.”

QUICK TURN AROUND OFFERS CHALLENGE FOR NYRBII, FURY FC: After both teams faced midweek battles, the New York Red Bulls II will host Ottawa Fury FC on Sunday afternoon at MSU Soccer Park in a big game for both in the race for position in the Eastern Conference (5 p.m. ET | Match Center | ESPN+).

With the Red Bulls II coming off a 2-2 draw against Bethlehem Steel FC on Wednesday evening that saw the side squander a two-goal lead late, the side could be looking to make a number of changes.

“I’m all over the place because we did so many poor things,” said Red Bulls II Head Coach John Wolyniec after his side let a potential first road win of the season slip through its fingers. “We have a quick turnaround so I need to see who is ready to play, who wants to keep doing what they are doing right now.”

Ottawa avoided allowing the recent dip in its league form to carry over to its Canadian Championship game, meanwhile, as an early goal by Tony Taylor earned a 1-0 win in the first leg of its Second Qualifying Round against AS Blainville. Picking up victory on the road meant the the mood out of the Fury FC locker room was very different as it faced up to its next few games.

“We faced today a very good team, organized. It was a very difficult game for us,” said Ottawa Fury Head Coach Nikola Popovic. “We are happy with the 1-0 result. The game didn’t tip over and it tells us that we will have to be very focused when coming in to play the second game because we expect it to be difficult.”

Disappointed with more than just the late letdown against Bethlehem, Wolyniec is looking for a strong response from his side as it returns home. The fact that the side is 5-1-1 at home this season should be a silver lining for the Red Bulls II, who took a 4-2 victory against the Charlotte Independence as they reopened MSU Soccer Park on June 9. So should the fact that four of the club's next five games are on home turf, but for Wolyniec believes producing the right mentality is going to be key if his side is going to get the result it needs to remain in the playoff positions.

"It’s a gut check. Teams have bad times and you need to see who really wants it,” said Wolyniec. “Who is good enough to go out there and turn it around and put a good effort out there because it wasn’t there today.”

Still in the middle of an extended run of games on the road, which will see the side also visit FC Cincinnati and Indy Eleven before its next home league contest on July 8 against Pittsburgh Riverhounds SC, Popovic took a moment to congratulate his side on a job well done on Wednesday night, which could provide positive momentum as Ottawa looks to make a move up from 12th place in the standings.

“I want to say that I’m very proud of our players,” said Popovic. “As you know we’ve come from a lot of games on the road, coming here and knowing what this game means for our club, for our project; they were fantastic.”