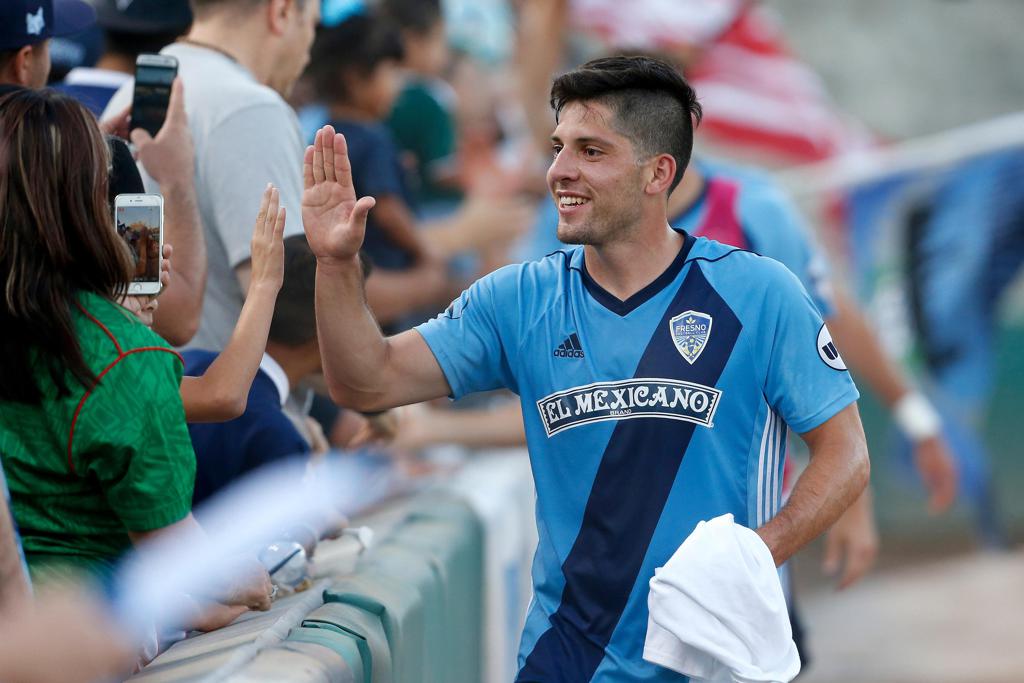 FRESNO, Calif. — Sunday was a special day for many people, with Father’s Day bringing joy for a lot of USL fans and players. That special day inspired Fresno FC forward Christian Chaney, who scored his side’s opening goal and assisted on the second in an impressive 4-1 victory against the Swope Park Rangers that pulled the Foxes back into the middle of the race for the USL Cup Playoffs.

“Being home in front of all the fans, feeding off from the energy, this morning with Mexico winning, I was just ready,” said Chaney. “I don’t know what it was about today, being a Father’s Day, all the people coming around, all the great vibes, I just fed off of it. Did what I had to do.”

One of the biggest things that boosted Chaney was the home crowd which was vocal all night, spurring the team on to its second four-goal outing the in the past four games. After missing out on points last Wednesday night despite a good performance against Northern California rival Sacramento Republic FC, the crowd's support was welcome for Chaney, who has been a fan-favorite in the city since his PDL days.

“I love playing here. I play for my people, in front of my family and my friends. There is so much support here,” said Chaney. “Every night I come out here, and I get on this stage, under these lights, in front of these fans, I just build off of it. It gets my blood rushing.”

As it nears the midway point of its inaugural season, there have been some difficult points in the first half of the year for Fresno, with injuries getting in the way of the team getting results. On Sunday, the side had a blank injury report for the first time this season and having its best team available made all the difference.

“With all players available, before they were all injured, it was nice to have a full squad to pick from. We haven’t had that all season,” said Foxes Head Coach Adam Smith. “Nothing really changed with the way I wanted to play. With the time on the training ground in the last two days, things started to click into place. We worked on some set pieces, two goals for the set pieces tonight.”

SAN ANTONIO TURNS A PAGE: Having had the best defensive record in the USL in the 2017 season with 15 clean sheets, things have not gone quite as well at the back for San Antonio FC this year, but after earning its fourth shutout of the season this past Saturday thanks to a superlative nine-save performance by Diego Restrepo the side is continuing to adjust to changes that have arrived within the lineup over recent outings.

“We’re evolving as a team from the last month or two months. This was a good win,” said Restrepo. “We were frustrated from the FC Dallas [Lamar Hunt U.S. Open Cup] game because we thought we could get a victory there, but we turned the page and tonight was a great team performance against a top of the table team.”

SAFC prided itself on being hard to break down last season as it conceded only 3.8 shots on target per game in 2017. While Saturday's display wasn't to that level as Sacramento brought consistent pressure throughout the game, San Antonio overcame its visitors holding almost 70 percent of possession and a 37-8 advantage in total shots to secure all three points.

“It was awesome, and one of the best defensive performances I’ve seen since I’ve been here,” said Restrepo. “Sometimes that’s how you win, you need character in defending and props to our defenders for doing that, especially Cyprian [Hedrick]. He really stepped up tonight and did awesome.”

Sacramento has only been held scoreless four times this season which reflects how strong San Antonio had to play at the back. Cyprian Hedrick recorded five blocked shots in the game as SAFC's defenders sacrificed regularly to reverse the defensive performance the last time these two teams played in the season opener when Republic FC won 2-1.

“All in all, it was about protecting the lead we had in the second half, and we managed to do so tonight. This is soccer, it’s a very difficult game and you have to make sure you’re able to defend and able to attack. Tonight, our defensive performance was tremendous,” said SAFC Head Coach Darren Powell. “You can’t be prouder of our players. We kept the clean sheet and made sure we kept the lead and got a goal at a really good time in the game to get into halftime in a good position.”

ENERGY FC GETS THROUGH TOUGH TEST: It was a busy seven days for OKC Energy FC, with games on the road against Portland Timbers 2 and at home against Rio Grande Valley FC, but after the struggles the side had seen in the opening 13 weeks of the regular season a pair of victories provided a glimmer of hope that all is not lost this season.

With so little time between games the team had to shuffle the deck between the two contests, and those changes from game to game provided the necessary energy to earn its first back-to-back wins of the season.

“When you’re playing on two days rest and the other team isn’t, it’s going to be hard. But as much as you need fresh legs, you also need fresh minds and players that can give everything,” said OKC Head Coach Steve Cooke. “In the three games, every single player that went out there – I think we used 19 – have been strong and committed and have really made certain that they give everything they could. The last two, we’ve shown real character to win those games. I couldn’t be prouder of the effort the players put in.”

One of the players that performed well last week was midfielder Philip Rasmussen, who provided assists in both matches from his set pieces.

“I try to kick the balls into the area as best that I can. It’s great to have some guys on the team who can head the ball and score some goals,” said Rasmussen. “I think it was a great team performance. It took everything out of us. We fought all 90 minutes during this really tough game. Very happy about the result. Glad to get six points in the last two games. That’s big for us.”

With a run of goals in six consecutive games after a five-game scoreless run, the attack may have finally clicked for Energy FC. Jaime Siaj scored in both contests for the side after appearing snakebit earlier this season, and the attack overall is now starting to show some added belief in front of goal.

“It happens that way sometimes. I think the game comes down to brief moments and we had a couple of those tonight that went our way,” said Cooke. “I think generally the performance was good and it will get better. I think the players now have that belief and confidence so that when the moment comes, instead of being tense and nervous, they just stroke it in.”