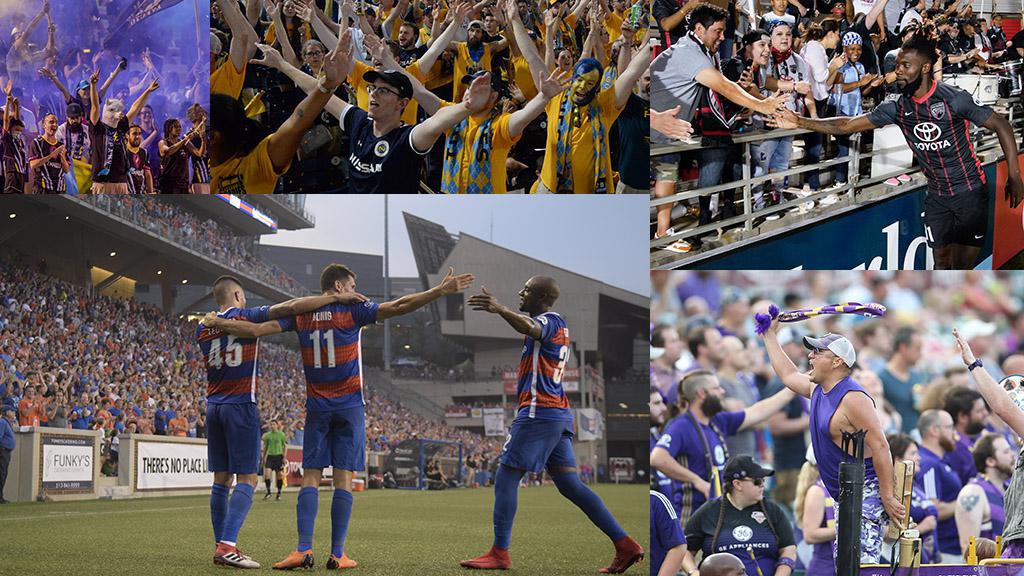 TAMPA, Fla. – The USL’s single-week attendance record reached a remarkable new high over the past seven days as almost 140,000 fans took in action across the country in Week 14 of the 2018 regular season. The total eclipsed the previous mark set six weeks ago by approximately 35,000 fans across a 23-game slate. Only a week after the league surpassed one million total fans for the 2018 season, the USL remains on course to approach nearly three million fans for 2018.

FC Cincinnati, Saint Louis FC and Pittsburgh Riverhounds SC marked Saturday night with their highest attendances of the season so far, with FCC welcoming 28,026 fans for its clash with the Richmond Kickers at Nippert Stadium to lead the league’s attendance mark for the weekend. The Charlotte Independence, meanwhile, set a new club record attendance at the newly-expanded Sportsplex at Matthews as crowds across the league’s venues continued to rise on the opening weekend of the 2018 FIFA World Cup.

The league also saw sellout crowds for Phoenix Rising FC, which was treated to one of the goals of the season by Jamaican striker Jason Johnson, and Nashville SC, which recorded a dramatic late victory before 9,047 fans at First Tennessee Park thanks to a 94th-minute goal by Ropapa Mensah. Almost 8,000 fans were also on hand at Slugger Field, continuing the strong support Louisville City FC has seen during its USL Cup defense in the Derby City.

“The remarkable scenes across the league both on and off the field in the past week were incredibly exciting, and we take our hats off to all those at the club level and the staff at the league office that helped drive the great attendance this week,” said USL President Jake Edwards. “Watching the action on the field this past week – which has seen the league earn the national spotlight regular throughout this season on ESPN – serves as an inspiration for all of us as the league’s visibility in its local markets and on an international level continues to rise.”

The USL averaged 6,306 fans across Week 14’s action, the second-highest average attendance over a one-week span in the league’s history, as the league’s independent clubs averaged 7,345 fans across the week. The league is now averaging almost 5,000 fans per game this season across all its clubs and almost 6,000 fans per game across its independent clubs.