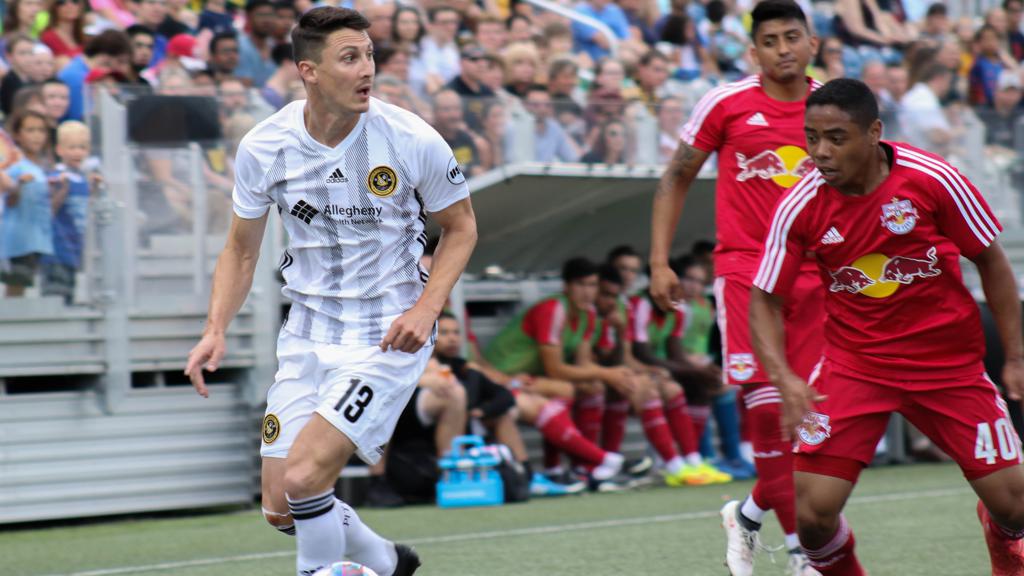 PITTSBURGH – A headed finish from Neco Brett in the 27th minute opened the floodgates as Pittsburgh Riverhounds SC raced past visiting New York Red Bulls II, 3-0, at Highmark Stadium on Saturday. The hosts generated the lion’s share of chances in the early going, firing five of the first six shots attempted in the match, but the breakthrough came just before the half-hour mark when Christiano Francois found first half substitute Kevin Kerr following an incisive run, allowing the midfielder to pick out Brett with a driven cross. Brett was on the spot to knock home his first of two goals in the contest and put Pittsburgh on the board in the opening period for the first time in four matches. The Jamaican forward added his team-leading seventh goal of the season in the 54th minute while his strike partner Romeo Parkes netted a third just over 10 minutes later to help secure the result. Riverhounds keeper Dan Lynd stopped two shots as the squad notched its eighth clean sheet of the season to improve to 6-1-6 (24pts) overall and drop New York to 5-4-5 (20pts).

1. Brett has now found the back of the net in each of the last two outings as Pittsburgh has bounced back from its first and only loss of the season – a 1-0 home defeat at the hands of Nashville SC on May 30 – with a pair of victories. One of the most dominant home sides in the league this season due in large part to its defensive prowess, the Riverhounds desperately needed the intervention from Brett which ended a 361-minute scoreless streak at Highmark Stadium that dated back to a 1-0 win over ATL UTD 2 on April 28. With the result, Pittsburgh has now outscored its opponents 11-1 in eight home appearances.

2. The win was the first for Pittsburgh in the series with NYRBII since July 4, 2015 as New York entered the night with a 4-0-1 record in the last five meetings between the two squads. The Riverhounds’ previous victory also came by a 3-0 score line at home.

3. New York’s road struggles continued as the side fell to 0-3-4 away from home in 2018. Head coach John Wolyniec’s side has now dropped 3-0 decisions in two straight road appearances and owns a -8 goal differential in the role of visitors as opposed to a +13 mark in seven home matches.

Neco Brett, Pittsburgh Riverhounds SC – The forward has now scored four of the team’s seven goals since the start of May and has matched his career-high with seven goals in 12 appearances after finishing without a goal in seven appearances for Portland last season