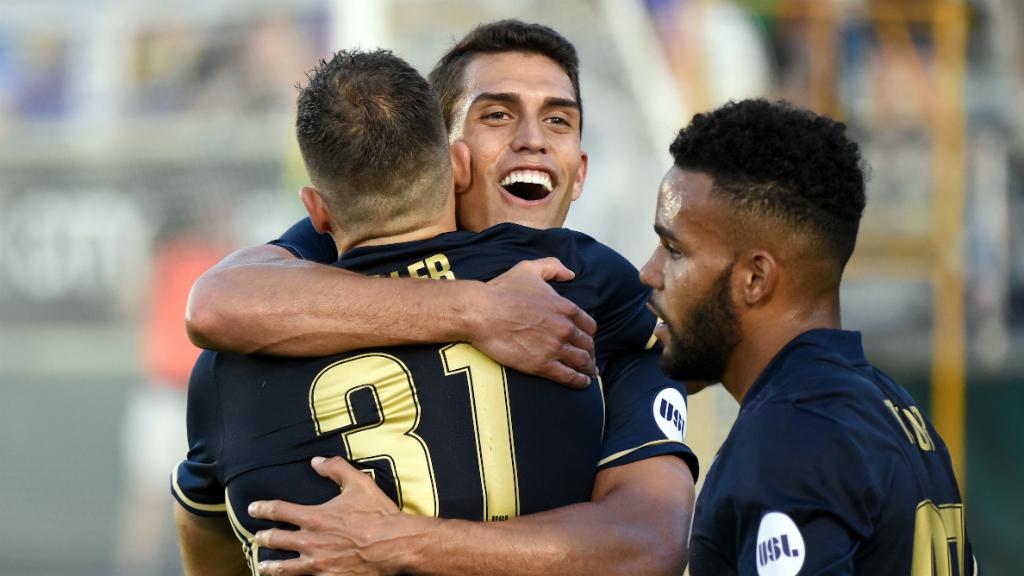 CARY, N.C. – North Carolina FC’s offense came alive on Wednesday night in a 4-2 win over Ottawa Fury FC at Sahlen's Stadium at WakeMed Soccer Park, a victory that broke a two-game losing streak as the side ended its four-game home stand on a high note. One of the notable performances in the match was midfielder Steven Miller, who scored the fourth goal to seal the win, a finish that brought a smile to the face of Head Coach Colin Clarke.

“I’m delighted for Steven [Miller]. Last year, he scored a lot of goals,” said Clarke. “For him, there hasn’t quite been as many this year – it’s been up and down, and he’s had a couple of little injuries – but he’s just starting to find his feet. So, yeah, the goal was typical Steven Miller: top of the box, find a spot, one touch and hit it. It flies in the corner. Good for him to get that and good for us.”

The goalscorer was typically humble in his assessment of the goal taking a well-trod route of feeling lucky. But with no assist on the goal, he had to take at least some of the credit for the goal.

“Honestly, right place, right time. I was on the ground and got up,” said Miller. “The ball had bounced out wide to DJ [Taylor]. He served it in, they headed it out and I think the fact that since I was on the ground, it kind of bounced to me at the top of the box and I just hammered it into the corner.”

With that result North Carolina FC ended its home run on a high as it looks to fight its way back into the race for the playoffs in the Eastern Conference. The side now heads on the road Saturday against Nashville SC (8:30 p.m. ET | Match Center | ESPN+). With a 1-2-2 away record, and Nashville a perfect 3-0-0 at First Tennessee Park in its inaugural season, getting a third win at home was vital for North Carolina's confidence ahead of that trip.

“We got the result. It was a must-win game. We needed three points. Their team is ahead of us in the standings, so we absolutely needed three points at home to end this home stretch,” said Miller. “Overall, we got the job done. It wasn’t pretty at times, especially in the first half, but we put four balls in the back of the net and only conceded twice. We’re going to take this, gain some confidence from it and head to Nashville on Saturday.”

YOUTHFUL ATL UTD 2 BOUNCE BACK: Conceding six minutes into a match is difficult for any team, but when you’re a team as youthful as ATL UTD 2, which has seen its lineup averaged an age of 21.6 this season, it can be even more difficult. But that was not something that worried Head Coach Scott Donnelly, who has watched his team from the beginning and was confident that they could solve things.

Thanks to a late goal, that approach paid dividends in Wednesday night's 1-1 draw with the Charlotte Independence at Coolray Field.

“This was a game as a coach where you take a goal six minutes in and after that, too much information, yelling from the sideline does them no good so you sit back, and you say they are going to have to solve it,” said Donnelly. “And I am glad that they did. They came through well, even in the not ideal scenario, going down a goal that early. This team has always shown resiliency, and what we are hoping to find is more consistency and I think we are inching toward that.”

While Donnelly didn’t want to provide too much information from the sideline, he took advantage of the halftime break to spur the team on to continue what was working in the latter stages of the first half.

“Yeah, the last bit of the first half we were calm in the final third, and picking our chances when to go and to whip some crosses in from the side,” said defender Shawn Nicklaw. “You know, translate that into the second half. We just tried to relax, we are a good enough team and we are going to create opportunities with these young talented kids on our squad. That’s what happened in the second half.”

Having played four straight road games prior to Wednesday night, Atlanta will play its second consecutive home game on Saturday against Ottawa Fury FC (7 p.m. | Match Center | ESPN+), with the players delighted to be at home, where all the wins for the team have come.

“It’s tough to be on the road for a whole month. We were all very excited to get back here and play in front of the fans and everything. It was good tonight and we are looking forward to the weekend,” said Nicklaw.

PENN PULLING CLOSER: For the first time this season Penn FC has racked up consecutive wins, defeating Toronto FC II and the Richmond Kickers over the past week to push its way just two points back of the eighth-place Bethlehem Steel FC in the Eastern Conference standings.

Those two home victories have given the club some important momentum as they head back on the road against defending USL Cup champion Louisville City FC on Saturday night at Slugger Field (7:30 p.m. ET | Match Center | ESPN+).

“Obviously we started off a bit rough. We were tying a lot of games before we got our first win, but, obviously, we are finding a rhythm right now,” said Penn forward Aaron Dennis. “I think Saturday will be a big test for us to see where we stand within the league.”

The defending champions will be a very difficult match, with Louisville having taken victory in all five of its home games this season and motivated to remain in touch with FC Cincinnati at the top of the Eastern Conference. With Penn having disposed of two sides that sat below it in the standings, now the big test of how far this side has come in their first meeting with Louisville this season.

“Louisville is a tough team we’ve watched them a lot. Last year they won the title completely deserved. They are still up there – a few games less than Cincinnati,” said Penn FC Head Coach Raoul Voss. “I believe they will be at the top again soon. They are a very tough opponent but we believe if we approach the game in the right manner we have a good chance there too.”

Voss has always done his homework, knowing where Louisville is strong, but with 236 interceptions his teams’ strength is similar and could make the midfield battle one to watch between the clubs.

“Louisville is extremely strong in transition, so we really have to be careful there. They’re quick in every turnover,” said Voss. Preventing those kinds of situations are going to very important, and then don’t give them too much space. When they have space, they are extremely hard to defend.”