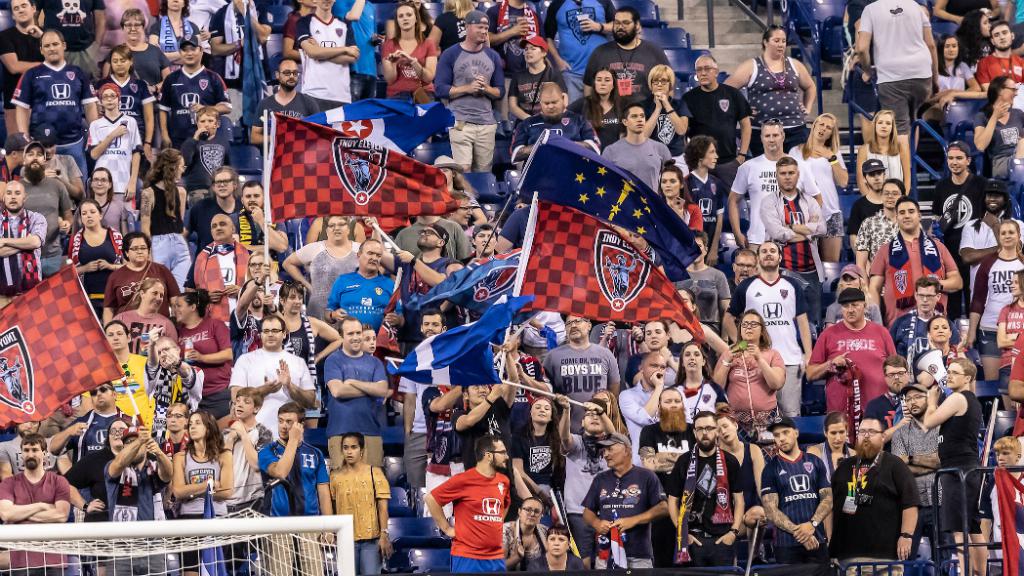 INDIANAPOLIS — After a four-match winless run, Indy Eleven returned home to a loud home crowd with 10,034 fans at Lucas Oil Stadium lending their voices to an important 2-0 victory against ATL UTD 2 on Saturday night. That home crowd was important in the win, creating an intimidating atmosphere for the visitors and giving energy to the home players.

“The fans had such an impact on the team. They're so loud and so supportive and they get behind us. I know the players feed off that energy,” said Indy Head Coach Martin Rennie. “It’s a great atmosphere. One of the best in the league and something we’re very thankful for.”

The early stages of the season have seen ups and downs for Indy with the team not able to play the same starting 11 two matches in a row so far this year, but against Atlanta the side started to resemble what could be considered a full-strength lineup, with only Tyler Pasher and Reiner Ferreira missing due to injury and Jack McInerney serving his suspension. With the side hovering near the playoff line in the Eastern Conference, getting some consistency could be key as the side makes its push for the playoffs over the middle third of its season.

“I think we haven’t had everyone available for some of the season. I’ve always felt when we have more of our guys back the team would be stronger and I think that was the case today,” said Rennie. “We haven’t been able to play the same lineup twice, ever. Certainly not two games in a row. That would certainly help us.”

With its victory against Atlanta coming through some smart pressing and more set piece excellence from Ayoze, there is still plenty of room for Indy to grow, especially in passing accuracy where the side is currently 31st of 33 teams in the league at a rate of only a 71.5 percent. In limiting Atlanta to only one shot on goal on Saturday, though, the club's overall shape is coming together, and could have a knock-on effect in other phases soon.

“We’ve been working on that a lot this week. Forward movements, forward runs, and people being a bit more creative and aware of what’s going on around them,” said Rennie. “But it also comes from good defensive shape and players being compact. If they win the ball back they will attack better as well because people are closer to them.”

CONFIDENCE RISING FOR NYRB II: A big victory against an in-form Charlotte Independence helped the New York Red Bulls II regain a lot of confidence on Saturday night, with their four-goal-display lifting New York level with the Independence on points in the Eastern Conference standings as it again put in a strong display in the attacking third.

In making an impressive return to its home at MSU Soccer Park, the confidence the side showed after responding quickly to going behind midway through the first half led to the improvement that came through after the halftime break.

“I’ve heard people talk about our fitness and our style and the way the team plays when they’re a goal down,” said New York Head Coach John Wolyniec. “That’s a part of it but at the same time I think we gain confidence, we’re going to gain confidence throughout the year and we gain confidence in games.”

That confidence pushed the team past Charlotte, which had been in good form with four consecutive wins and made life hard for the Red Bulls II defense early. But the young side dealt with that challenge well, responding after going behind as Amando Moreno's goal two minutes after Cordell Cato had opened the scoring for the visitors setting the stage for another big second-half display.

“Charlotte has been a good team for the past month or two, so that was a tough challenge,” said Wolyniec. “They present a lot of problems for us because they move the ball around, they rotate and they make a lot of tough decisions for defenders. To take the first goal and then get it right back that’s a credit to our team.”

Substitutions had a big influence on the match, with Andrew Tinari especially significant as he scored just one minute after coming on. Lucas Stauffer also found the net soon after coming off the bench with a fine volleyed finish that gave the hosts a three-goal lead with 16 minutes to go, which effectively wrapped up all three points for the hosts..

“I’ve said a couple of times this year as far as the roster goes because we’re pretty deep, this is one of the deepest teams we’ve had,” said Wolyniec. “Credit to the players to come in, it’s not always easy to come in off the bench. [Andrew] Tinari is a guy that’s been a big contributor for this team so I’m not surprised there, but he comes on in a good way.”

CROWD SPURS PENN FC ON: Having faced three straight away games, Penn FC returned home and got a victory over Toronto FC II on Saturday night with a dramatic stoppage time winner. The hosts found an extra push late in the match in part due to the vociferous support from a large home crowd.

Claiming a victory that was essential to the club's hopes of getting back into the playoff race in the seventh minute of stoppage time added plenty of stress for Voss, who was happy with the victory, even if not the fashion it arrived in.

“It gives me more white hair [a result] like this, but overall I'm very happy, the response of the guys was great,” said Voss.

Penn has used set pieces to great effect this season, sitting second in the USL this season with four goals from set piece opportunities. Ken Tribbett  has been instrumental in those chances, and his two headed goals against Toronto moved the center back into the team lead with four goals overall this season, a throwback to his previous stint in Harrisburg when he recorded three goals from the back for the club.

“To be able to step up and score a couple on set pieces which is something we've worked on all week, was very important to us,” said Tribbett. “Heading the ball has always been something I've worked my whole life, it's usually how I score most of my goals. It was just one of those nights the ball was just attracted to my head.”

With a much-needed victory, its third of the season, and a quick turnaround to play on Tuesday against the Richmond Kickers, the club is hoping to use its home support to provide momentum into what is another crucial game for the club's playoff drive.

“We got three points, thinking big picture about the team we are taking this victory as motivation, we know we have a match on Tuesday and we will defend,” said midfielder Jerry Ortiz.