Sports Science, USL Take Inside Look at What Makes a Great Soccer Player

WHIPPANY, N.J. – In the words of the New York Red Bulls II Head Coach John Wolyniec, “At the highest level of soccer, all you’re looking for is a small advantage. Any little advantage that you can gain could pay off in big dividends.”

With that in mind, forward Ben Mines, defender Jordan Scarlett and goalkeeper Scott Levene – all of whom have competed in the USL for the Red Bulls II this season – recently worked alongside technology company Tobii Pro to look at the rapid evaluation process through which players read their opponents, gauge distance, determine the position of the ball, and take aim at goal for a fascinating look inside the processes that can elevate players to the top levels of professional soccer.

Each of the players wore wearable eye trackers which measured their precise eye positions and movements as they ran through a series of drills involving corner kicks, free kicks, penalty kicks, target shooting, and scrimmages. An adidas Smart Ball extracted data on the strike point, speed, spin, and trajectory when the ball was kicked.

The results were revealing. Strong peripheral reaction time was a key skill shared among the players when passing a defender. All the players approached penalty kicks in a similar manner – a high degree of concentration was centered on the goalkeeper (46 percent) and the goal area (38 percent), less so on the ball itself (16 percent).

“Over the past decade, new technologies have turned athletic performance and training into a science,” said Mike Bartels, Senior Research Director at Tobii Pro Insight. “Eye tracking is unique in that it provides accurate, second-by-second eye tracking data during the rigors of an athletic competition. It allows coaches and trainers to see what their players see.”

The film was filmed by Fractal Media at the New York Red Bulls training facility in Whippany, N.J.

“Our production team comes from a science and math background, so our goal is to creatively apply research technology,” said Munna Koorathota, Producer, Fractal Media. “Soccer is an incredibly dynamic sport, and studying professionals gives us a good way to understand different aspects of visual processing.” 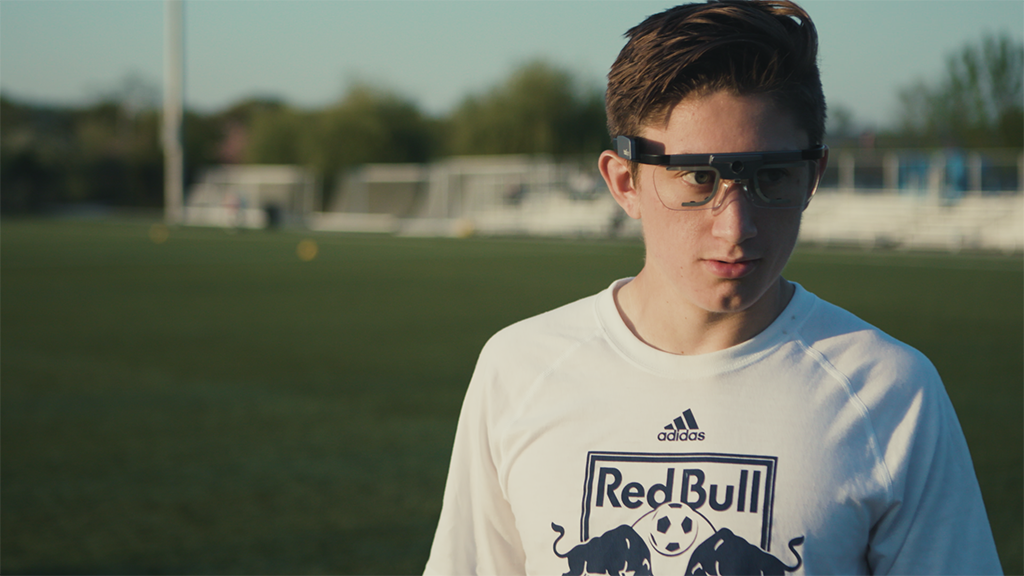 Through the highly-advanced technology provided by the Tobii Pro Glasses 2 model – which comes in at 45 grams and is equipped with a wide-angle HD scene camera, infrared illuminators, four eye cameras taking up to 100 pictures per second, microphone and a pocket size recording unit that saves gaze data on an SD card – the data can be viewed in real time, replayed or exported for further analysis. That makes it possible to reveal methods and techniques which occur instinctively or too quickly to be observed in real-time, and offers opportunity for growth and greater understanding at the coaching level that can be passed on to those working through the ranks toward a professional career of their own.

In addition to soccer, sports including hockey, basketball, golf and tennis are among the sports utilizing wearable eye trackers to compare the visual strategies of experts and novices in a bid to identify the best techniques and fine-tune strategies.

Fractal Media's work with the Red Bulls is the latest film in an ongoing series entitled Function, which strives to make science entertaining, introducing the public to technology they may not know about today, but that will impact their life tomorrow. Other episode can be found in the links below.