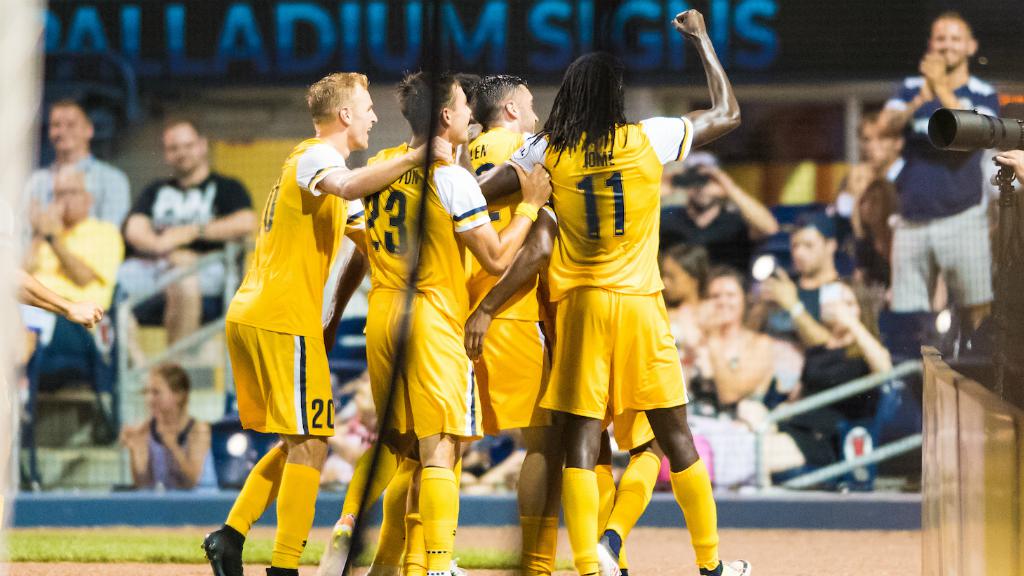 NASHVILLE, Tenn. — With the side having scored only eight goals in its first nine games of the season, the addition of Brandon Allen and Ish Jome to Nashville SC's attacking options on May 22 was designed to boost that production.

When the newcomers combined to open the scoring in a 3-1 victory against Penn FC on Saturday night, with Jome making a stunning run to unlock the defense and set up Allen for a close-range finish, it was emblematic of the effect the club is hoping the duo can provide as it pushes higher up the Eastern Conference standings.

“[Jome] has terrific ability as we’ve seen from the goal,” said Nashville SC Head Coach Gary Smith. “In those moments of the goal, you want to see what he’s capable of. He’s a really good athlete and good footballer. You can see he’s really appreciative of the side he’s playing in and the style of play we have and he’s making an impact with his first start.”

The emergence of Jome has added to an already formidable attack with Allen having scored three goals in all competitions since his arrival and Lebo Moloto continuing to shine with another standout finish that landed on ESPN's SportsCenter Top 10 on Saturday night against Penn. Allen played set-up man for Moloto's finish that crashed in off the underside of the crossbar, continuing a streak that has seen either Allen or Moloto record a goal or an assist in the last four matches.

“They’re intelligent soccer players,” said Smith of the duo. “It’s a bit of a language in itself. They both move the ball and play in a fashion that speaks. They have a synergy that has come together quickly. For us, it can only be good.”

Allen's second goal in as many games after notching the game-winner last Wednesday night against Pittsburgh Riverhounds SC continued his bright start in the Music City. The 2016 USL Rookie of the Year is certainly enjoying his new home, and the connections he's made with his new teammates.

“We had some good connections today on the field. Sometimes we missed them, but overall, I was really happy with the team performance,” said Allen. “This was my first home game, so to play at home in front of the fans was really nice and we got another good three points.”

PITTSBURGH BOUNCE BACK: After suffering its first loss of the season last Wednesday night, Pittsburgh Riverhounds SC rebounded quickly to secure a 2-1 come from behind victory over the Richmond Kickers on Saturday night, just the second win for the Hounds at Richmond's City Stadium in the past eight seasons. But the result came despite the Hounds not being at their best according to forward Neco Brett, who scored the equalizer and assisted on the winner for the visitors.

“It was a good game, it was tight and we didn’t play our very best. But that’s how it is sometimes, you have to dig through and do your very best to come out with a victory,” said Brett.

But that sentiment was disregarded by the opposing bench, with Kickers Head Coach Leigh Cowlishaw impressed by the opponents. The Hounds overpowered the Kickers after going behind in the 53rd minute, finishing with 20 shots in the match as they scored seven minutes apart to move back into third place in the Eastern Conference standings.

“That wasn't a close one. They completely ripped us to shreds in the second half,” said Cowlishaw. “The goal gave us a little bit of hope, but as soon as that happened you could see them push their wings even higher up. It could have been four or five by the end of it. It’s the reality. It’s going to get really difficult. We’ll see if we can regroup.”

The closeness of the match was largely due to an impressive performance from Richmond goalkeeper Trevor Spangenberg, who made six saves as he tried to hold on for his side against a relentless attack from the visitors.

“We were getting numbers in the box. Spangenberg made a number of good saves, I just wanted to keep getting guys in at the back post,” said Riverhounds SC Head Coach Bob Lilley. “The first goal we had guys in there, and the ball came into the box, and it was an open net at the back. And the second one was a good ball in behind and a really good finish.”

FAST PLAY GETS BETHLEHEM BACK: The most dramatic comeback this weekend went to Bethlehem Steel FC who scored two goals in three minutes, the second an 85th-minute winner, to overcome North Carolina FC on Saturday night. Staring down the face of a second consecutive defeat, Steel FC appeared to have run aground, but late on found a way back to its typical style to overcome its determined hosts at Sahlen's Stadium at WakeMed Soccer Park.

“I think we deserved some credit for the ball speed in the second half. I thought we knocked the ball around a lot better in the second half,” said Bethlehem Head Coach Brendan Burke. “I don’t think we knocked it around much at all in the first half to be quite honest. I think we were playing long diagonals and balls down the line – that’s not our identity, so we kind of got back to what we try to preach and teach.”

The comeback came down to the halftime talk from Burke, who was frustrated with his side’s inability to play their own way through the first 45 minutes. That talk clearly worked, although took some time to show results.

“We tried to light a fire at halftime and say, ‘We can’t allow them to establish a rhythm in the second half.’ I think we did a good job of that,” said Burke. “That said, they still could have gone up two- or three-nil before we ever got one. But I’m just proud of the fight.”

And while Santi Moar recorded assists on both of Steel FC's goals to give him a team-high three this season, the player that sparked the rally was 17-year-old debutant Ben Ofeimu, who scored on his professional debut after an impressive display at the back. Ofeimu's age highlighted the youthful element at Bethlehem, with the scorer of the game-winner with five minutes to to, Michee Ngalina, only one year older.

“Our goal scorers tonight were 17 and 18 years old, respectively,” said Burke. “[Ofeimu] was an academy player playing his very first pro game, and he stood up tall as a center back, which is hard to do in a two-forward system when you got two guys in [North Carolina forwards, [Daniel] Rios and [Ulrich] Ewolo. Even when [Marios] Lomis comes on, you got guys who are scoring goals in this league at a great rate. So, happy for the kid, happy for Ben.”