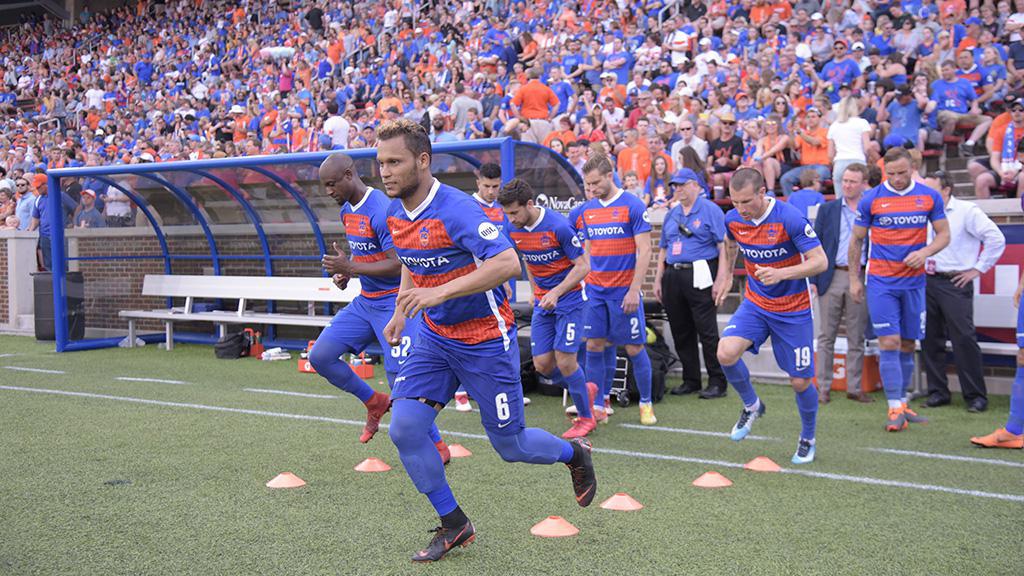 CINCINNATI — Given the history that's developed between the two organizations over the past two seasons, Saturday's matinee between the New York Red Bulls II and FC Cincinnati figures to be one of the must-see games in the USL this weekend (1 p.m. ET | Match Center | ESPN+). With NYRB II undefeated at home after its emphatic 4-1 victory against Indy Eleven last Sunday afternoon, but Cincinnati having a strong 4-1-1 away from home, everything seems to point toward a potential playoff preview for two teams that currently sit three points and four places apart in the Eastern Conference standings.

With the manner the Red Bulls II have been playing at home so far this season, there's a healthy level of respect coming from FCC's side ahead of the matchup.

“The team we’re playing this Saturday have beaten Tampa at home 5-0 already, they’ve got international stars on their team. They’ve beat Indy last week, 4-1, who’ve got some big-time players,” said Cincinnati Head Coach Alan Koch. “We have a lot of respect for the New York organization, obviously, and we’d like to see a couple of different clubs and take the best things in terms of how they operate. We’re going to focus on this game and we know it’s going to be a tough game this Saturday.”

Cincinnati has only won once against New York in the four previous regular-season meetings between the clubs, having suffered defeat in both of its prior visits to the 2016 USL Cup champion. The club is also looking to rebound from a 2-0 loss to arch-rivals Louisville City FC, which means picking up a first road victory in the series between the clubs would be a major boost. It has certainly heightened the focus for the club that no games come easy, especially against such a strong opponent.

“They’re a good team. A couple of top teams have gone to New York this season and have had a hard time. I really respect the New York organization in general. I love what they do from the top down and we know it’s going to be a difficult place to play,” said Cincinnati midfielder Jimmy McLaughlin. “But coming off a loss this weekend, we really want to bounce back and show we can beat the top teams. We’re ready to go. We’re putting a good week of training in. We’ve got a chip on our shoulder and we want to get back to winning ways this weekend.”

INDEPENDENCE, OTTAWA PUT FORM ON THE LINE: If you were picking a group of the most in-form team in the USL Eastern Conference it would be impossible to leave the Charlotte Independence and Ottawa Fury FC off that list. That makes Saturday’s match between the two (7 p.m. ET | Match Center | ESPN+) a blockbuster that sees Ottawa knocking on the door to the top eight in the Eastern Conference, and the Independence eager to maintain their place in the playoff positions.

With Fury FC coming off a 3-0 victory against Ontario rival Toronto FC II that saw the side win for the fourth time in its last five outings, Ottawa is clicking on all cylinders as it looks to complete a perfect three-game homestand.

“The boys are confident and we are on a good run right now,” said Ottawa goalkeeper Maxime Crepeau. “We are trusting ourselves with the system that the coach puts on the tactics board and managing the good moments and the bad moments during the game. Saturday will be a tough game, but we want to keep going and our objective is three points.”

The defensive strength the side has developed since a tough start to the season that saw the side concede nine goals in its first two games of the season has been a hallmark of Fury FC's drive up the Eastern Conference standings, with the club now sitting in 10th place and just one point out of the playoff positions.

“It is now six games without conceding a goal with a Canadian product, which is very important for us,” said Fury FC Head Coach Nikola Popovic. “From where we were seven months ago to where we are now, we are in good shape. We are moving towards our goals, but we are still far. This team can play much better.”

The defensive performances have been noted by Independence Head Coach Mike Jeffries, whose side is coming in on an impressive run of attacking form with nine goals in its last three outings. The Independence know they will have plenty to do to break down Fury FC, but believe they have the tools to get a positive result at TD Place.

“Ottawa has really played well recently. They've clamped things down defensively, they're very well organized defending from a little deeper than they did early in the season,” said Jeffries. “For us, it's going to be important that we break them down and to move the ball as we did against Richmond. I think it's tricker playing at their place the way the field plays and the turf and so forth. It doesn't always make it easy to maintain possession so I think we'll have to adapt to that and we'll have to manage a team that has a lot of quality players and some very pacey guys going forward.”

The two teams played each other in the season opener with Charlotte managing a big 4-1 win but since then there has been a vast improvement from Fury FC. This match will also be in Ottawa giving the Independence more to think about.

“They're a different team than they were in the season opener,” said Jeffries. “I think the season opener they came here and they were really possession-oriented and almost at all cost they kept possession and weren't as dynamic or dangerous in the final third. Since that time they've switched in terms of their style of play and they're a little more able to sit in defensively and keep shape. They're certainly more direct and dynamic going forward. I think it's not a lot we can take from that game.”

CONSISTENCY NEEDED FOR NCFC AND STEEL FC: Both North Carolina FC and Bethlehem Steel FC have shown moments of quality this season but have struggled to find that form consistently, which has resulted in both sitting outside the playoff positions in the Eastern Conference going into this weekend's action.

When the two meet on Saturday night at Sahlen's Stadium at WakeMed Soccer Park (7 p.m. ET | Match Center | ESPN+), it won't be a make-or-break contest, but a positive result for either would provide the chance to build a platform for success as the midpoint of the season nears.

“We felt early in the season, despite the bad results, that we were playing well enough. Some of the breaks didn’t go our way, but we have been consistent since then,” said North Carolina FC Head Coach Colin Clarke. “We’ve only been beaten once, obviously with the poor performance in Cincinnati, in five games between league play and the Open Cup. But the signs have been there. We have a great group that works hard every day. We’re pushing each other and playing together as a team. We’re defending as a group and attacking as a group. It is great to see. I think everyone has to take credit for that throughout the team.”

There are good signs there for Bethlehem as well, which had scored freely, scoring 12 goals in seven matches prior to a narrow 1-0 loss to Ottawa Fury FC last week.

“I think we did enough to put ourselves in a position to score in Ottawa but we were not sharp at all in the final third that day,” said Steel FC Head Coach Brendan Burke. “We discussed having seven or eight flat performances and that can happen in the course of a season but it can't happen with any regularity so there has to be a response from us this week in [North Carolina].”

The biggest issue for Bethlehem has been its away form, with just one win on the road, but Burke doesn’t give excuses, knowing the defense hasn’t been good enough to get the job done. In visiting a North Carolina side that racked up a 4-0 victory last Friday night against ATL UTD 2, Steel FC is going to have to get its work done efficiently at the defensive end to put it in with a chance of a second away win of the season.

“We will not change the way we play. We must be more consistent and when we find that form on the road like we did last year we will be a difficult game for anyone on the road like we were in Indy,” said Burke. “[North Carolina] is an explosive attacking team with experienced and quality players all over the field, and an experienced staff, we have a real respect for the environment we are entering on the weekend and will do whatever we can to identify ways to stay in the game long enough to make it difficult for them to pull away.”

As impressive as his side's performance was at the attacking end against Atlanta, though, for Clarke the manner in which his side took care of things at the other end of the field mattered more, and will matter again this Saturday.

“I wouldn’t say it is important to score that many goals,” said Clarke. “It is nice to score that many goals and win the game comfortably, but more importantly for me was the clean sheet and being good defensively. That is what will get you to a championship. Keeping cleans sheets and being difficult to play against, but also having the quality to score goals. At the minute, we are doing both very well.”