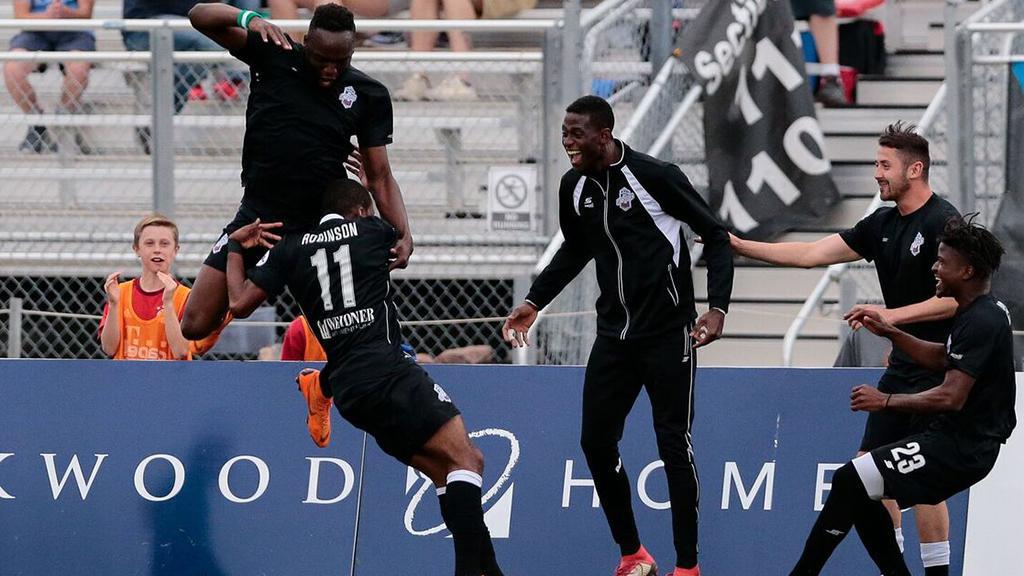 COLORADO SPRINGS, Colo. — Having fallen slightly off the pace in the USL Western Conference, Colorado Springs Switchbacks FC got right back into the mix on Saturday night with a comprehensive 3-0 win against Saint Louis FC that could prove key in the club's bid to return to the USL Cup Playoffs at the end of the season.

The Switchbacks rarely looked troubled in the match, cruising to the big victory that made a big statement to the rest of the conference as Colorado Springs claimed its second win in the past three games.

“What a relief,” said Switchbacks captain Josh Suggs. “Not even to just get the win, but to score more than a couple goals is a huge relief and to get that off our back is nice.”

It has been a long run for the Switchbacks, with the match against Saint Louis the fifth game in 15 days in all competitions. That made things difficult for the side, between a combination of travel and altitude there were some tired legs for the hosts, but the the diligence the Switchbacks showed in putting forth a positive performance provided some major bounce for the side moving forward.

“We could've been up 3-0 at the half. All-in-all, we'll take the three points because that was really important to us,” said Colorado Springs Head Coach Steve Trittschuh. “The guys were tired, that was our fifth game in 15 days, so we knew they were going to be tired but they battled through it and I was happy for them to score the three goals but also get the shutout.”

The defense has been strong for the Switchbacks all season, having conceded just eight goals in 13 games, putting the club's 0.61 goals-against average second in the league behind only Pittsburgh Riverhounds SC. The thing holding the side back from being in contention at the top of the league has been the other end of the park, but that showed some signs of changing on Saturday as the side capitalized on three of its eight chances created with Luke Vercollone scoring twice to lead the side to an emphatic victory.

“I felt we did well, I felt we deserved it,” said Vercollone. “As always, our defense was amazing. And to finally get some goals to support them was well deserved. It's about time.”

After recording the first four-goal game of the season to move to seven goals this season, though, the 20-year-old took center stage in lead ngh Los Dos to a 7-2 victory that again showed the firepower the talented young squad possesses. The No. 3 player in the USL 20 Under 20 a season ago, Zubak was delighted by the display, and the feeling within the Galaxy II's camp as the game approached.

“Tonight was great. Obviously, it’s been a weird start to the season, but it’s been good at home,” said Zubak. “You can see how good we play at home. The vibe was good tonight. The crowd was into it and the guys were up for the game. And right away I was feeling it, so I mean having this accomplishment it just feels awesome.”

Zubak now sits behind only the Swope Park Rangers' Kharlton Belmar in the race for the USL Golden Boot, and has more than doubled his career tally for goals in the USL after entering this season with six goals in his first two full seasons with Los Dos. The U.S. Youth International is still a work in progress according to Galaxy II Head Coach Mike Munoz in terms of his all-around game, but the eye for goal the Corona, Calif. native has displayed this month is an indicator that there's plenty more to come both for the player and for the Galaxy II as a whole as they try to earn their way back into playoff contention.

“Zubak is in a good run of form, especially on the offensive side. We’re asking him to do more defensively and tactically, so that part needs to improve to complete his overall game,” said Munoz. “But I’m happy for the kid. I told the guys at the end of the game that while the seven goals were fantastic, I thought that the collective performance wasn’t at the level that it needed to be. We have to remain humble.”

That goal-scoring form is not just there for Zubak, but for the whole side with LA having scored three or more goals in four of its last five matches. But in that run, Los Dos only has two wins, with losses to Portland Timbers 2 and Phoenix Rising FC despite scoring three goals in each contest. Those types of results had Zubak echoing his coach.

“We’ve got to keep on scoring goals. Having scored so many goals in the last four or five games, we’ve just got to keep that momentum up,” said Zubak. “Also just as a team, collectively, stop giving up goals. Because if we stop doing that, this season could go really well for us.”

BELIEF KEY IN PORTLAND: In a result that would have confounded many just months ago, the Portland Timbers 2 earned a 1-0 victory against Western Conference-leader Real Monarchs SLC on Saturday afternoon at Providence Park to squeeze closer in the race at the top of the conference standings.

After squandering two penalty kicks in either half and other chances over the course of the game, it was looking like it was going to be a frustrating afternoon for the hosts, reminiscent of the 2017 season, until Dairon Asprilla made up for his first-half penalty miss with a goal 13 minutes from full time that helped Portland to all three points.

“It speaks to the character and belief in the group,” said T2 Head Coach Cameron Knowles. “The chances they were creating kept fueling that positivity that they could feel a goal or another chance was going to come and they kept pushing the game.”

With the result, T2 finds itself second in the Western Conference, just two points behind the Monarchs, in a significant change from the 2017 season. While the offense has clearly improved the improvement at the back has been understated, with the club recording its seventh shutout of the season to sit tied for the league-lead alongside Pittsburgh Riverhounds SC.

Portland had to weather a late flurry from the Monarchs on Saturday after keeping their visitors in check for most of the contest, and Knowles is appreciative of the efforts his players are making to ensure the side avoids the type of letdowns that were a regular occurence a season ago.

“It’s a team effort. The guys in there, regardless of whatever position they play, they’re very proud of keeping teams out of the net,” said Knowles. “It’s big. It’s been important for us. We’ve had some games where we’ve conceded a few chances and whatnot, but guys have made plays – they’ve made tackles, they’ve made saves, attacking players have tracked back and helped out and it takes that collective effort to get a shutout.”

The Monarchs have garnered a reputation as one of the strongest teams in the conference after claiming the USL Regular Season Championship, making Saturday's victory for T2 one that is sure to make the rest of the league sit up and take notice of the changes at T2 who will now be a big threat moving forward.