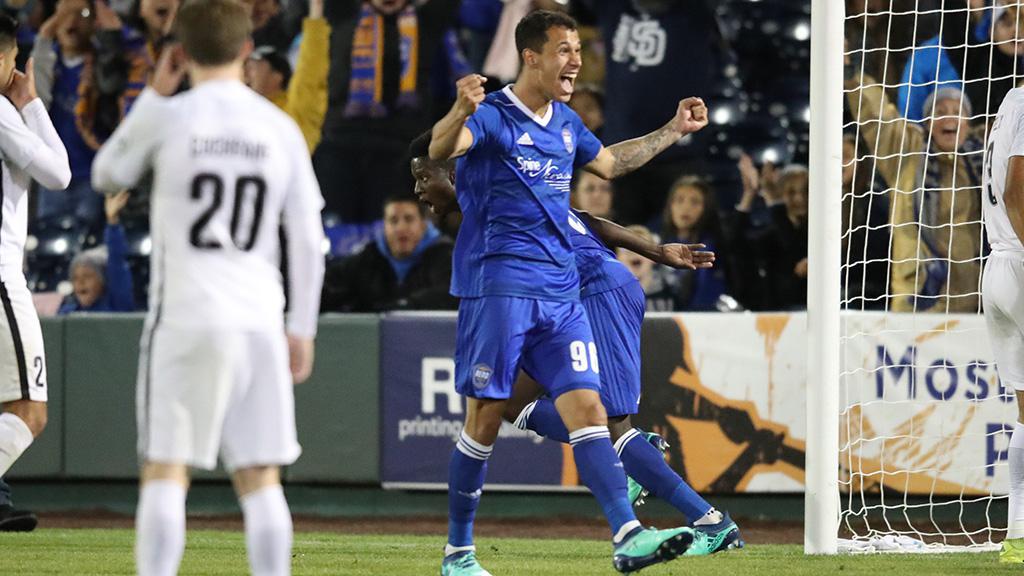 RENO, Nev. – In making its drive up the Western Conference standings over the past month, it’s been the road form of Reno 1868 FC that has been a key component with the side going undefeated in six contests so far this season away from Greater Nevada Field.

But on Saturday night, 1868 FC moved into the playoff positions for the first time this season after a 2-1 victory against San Antonio FC that saw the hosts claim its second home win of the season against one of the other clubs vying for a return to the postseason this year. After the struggles the club had undergone so far this season on home turf, the victory was a welcome reward for the hosts.

“Winning at home has been kind of tough for us this year, but we brought a lot of energy tonight,” said Reno Head Coach Ian Russell. “We’re playing with a lot of intensity and the club is really confident right now.”

Reno’s second season is starting to mirror its first, with the club’s winless start now being followed by an extended undefeated streak. Last season 1868 FC went on a run that saw the side put together a record of 8-1-4 between the start of May and the end of July. This season, the side hasn’t been quite as explosive offensively in posting a 4-0-4 record in its last eight outings but the chemistry in the attacking third that took time to develop early in the season was in full evidence on Saturday as 1868 FC notched seven shots on goal overall, the most San Antonio had conceded in a game this season.

Mo Thiaw led the way on Saturday night with the game-winning goal and an assist that gave the Senegalese striker two goals and two assists in his past three games, while Jerry van Ewijk scored in his second consecutive league outing as the interplay between those two and Thiaw’s fellow San Jose Earthquakes loanee Paul Marie shone through.

“I think at the beginning of the season, we were trying to get to know one another as a team,” said Van Ewijk, who recorded five key passes in Saturday’s contest in addition to his goal. “But it feels good right now. I am feeling well about my [game] at the moment.”

San Antonio certainly played its part in what was a highly entertaining contest as both Sonny Guadarrama and Alex Bruce hit the woodwork in addition to Omar Gordon’s remarkable goal directly from a corner kick early in the second half that drew the visitors level. Slipping out of the top eight after suffering defeat for a second time at Greater Nevada Field, however, the visitors were disappointed with their performance.

“We have to give credit to Reno for playing a good brand of football, but I think we left a bit to be desired,” said SAFC defender Greg Cochrane. “We had chances that we didn’t capitalize on and gave up goals that we shouldn’t have. When we look at everything, it’s a disappointing result, but we have to learn from it and move on.”

With three of the club’s next four games on the road, including the return fixture with San Antonio on June 23, Reno still has more work to do to solidify its place among the Western Conference’s contenders.

After Saturday night’s display, though, 1868 FC looked like a side that is now coming into its own.

“There are a ton of matches left, but we’re moving in the right direction,” said Russell. “We’re ready for our next challenge.”