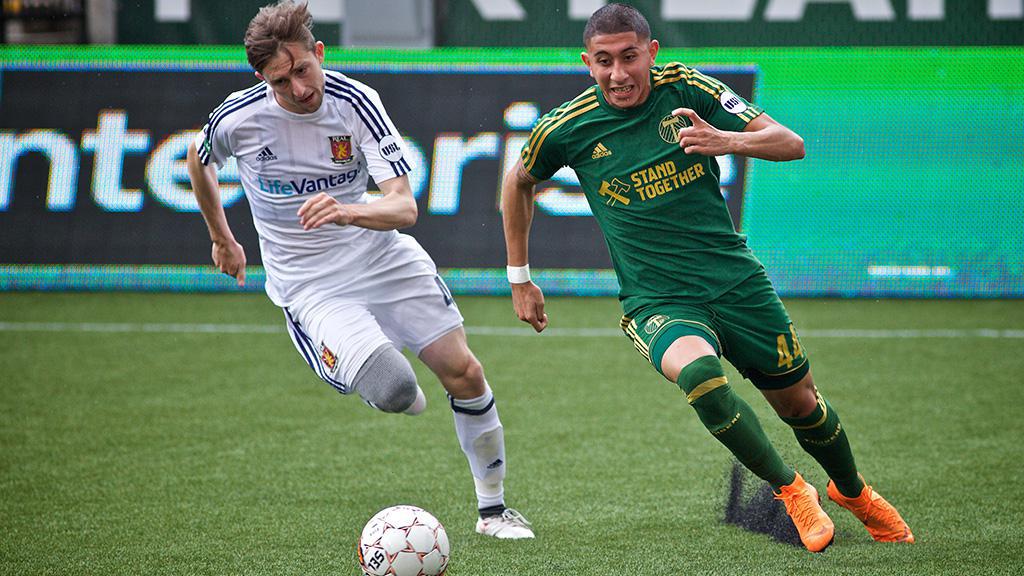 PORTLAND, Ore. – The Portland Timbers 2 brought an end to Real Monarchs SLC’s four-game winning streak as a late goal by Dairon Asprilla earned a 1-0 victory on Saturday afternoon at Providence Park. Real’s Chandler Hoffman almost gave the visitors the lead in the 20th minute as he shot just wide of the right post, and five minutes later T2’s first good chance arrived as Foster Langsdorf’s point-blank header was well saved by Monarchs goalkeeper Jake Leeker. Portland had the chance to take the lead from the penalty spot 11 minutes before halftime, but Leeker first saved from Asprilla and then palmed away the rebound to allow his defense to recover to keep the game scoreless. Leeker made another big save just before the break as he came off his line sharply to close down a chance for T2’s Renzo Zambrano, but Portland’s pressure continued into the second half and resulted in a second penalty kick after Marvin Loria was brought down in the area. For a second time, though, T2 missed from the spot as Zambrano shot high to the right side with an effort that clipped the crossbar. Portland was finally rewarded with 13 minutes to go, however, when Asprilla was played into the left side of the penalty area and shot low past Leeker to put the hosts ahead. Real tried to find an equalizer late, but while Maikel Chang slid a shot just wide of the right post with five minutes to go and Andrew Brody had a late effort saved by T2 goalkeeper Alex Mangels, the hosts held on for all three points.

Dairon Asprilla, Portland Timbers 2 – Asprilla rebounded from his missed penalty kick in the first half to produce the finish that decided the game, a reward for a positive display throughout that saw the Colombian finish with five shots and one key pass.