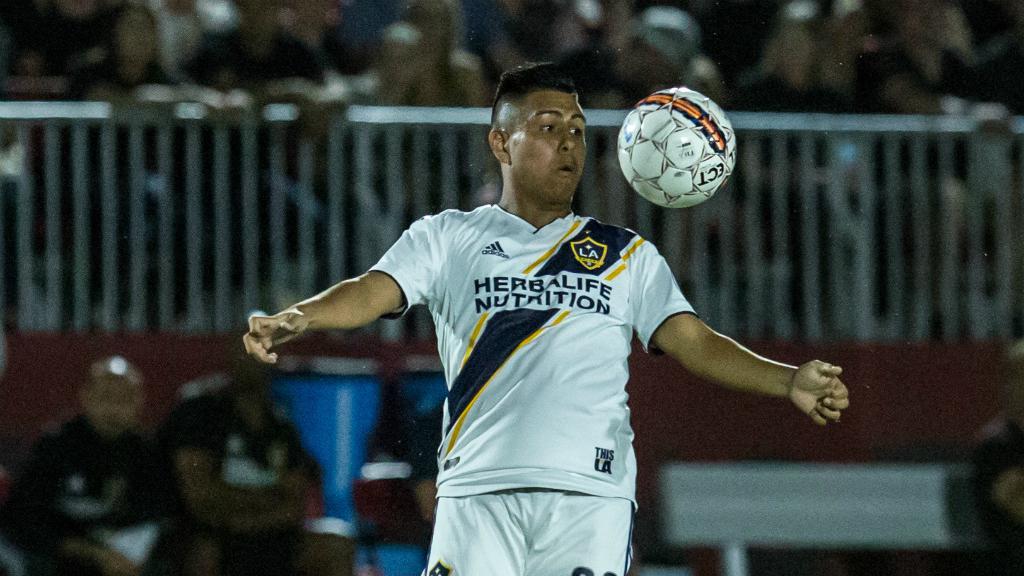 LOS ANGELES — The USL has been the professional starting point for some outstanding young players in recent years, with the likes of the New York Red Bulls' Tyler Adam and Vancouver Whitecaps FC's Alphonso Davies making their mark in the league before ascending to Major League Soccer and the international ranks.

This year it's been the turn of 15-year-old Efrain Alvarez of the LA Galaxy II, one of a trio of top young players that have shone already this season for Los Dos. Having recently become the youngest player to score a hat trick in USL history, the Galaxy II forward this week was called up to the Mexico U17 National Team for the Varsseveld International Tournament in the Netherlands next month.

But Efrain is not the first member of his family to star in the USL. Older brother Carlos, who currently plays for Las Vegas Lights FC, is comparatively a veteran at 27 years old but has recorded nine goals and 14 assists over the past three-plus seasons in the league. As a former No. 2 selection in the MLS SuperDraft in 2013 after a stellar college career at the University of Connecticut, the elder Alvarez has a unique perspective on one of the most talented teenagers in North America, and what has brought him to this point in his first full professional season, his role as a mentor, and how the family has helped keep his feet on the ground.

“First of all, with him growing up I was there for his youth a little bit, I attended the University of Connecticut so I wasn’t there that much, but as much as I was there and could bond with him and talk with him, as the older brother I would try and give him the right advice,” said Carlos this week.

With the older brother away playing with the Huskies while Efrain was still young, much of the influence on his early career came from the rest of the family. For the Alvarez brothers, their parents have been vitally important in keeping their feet on the ground and their heads in the sky.

“Obviously my parents kept him grounded, he kept working and making his sacrifices,” said Carlos. “We congratulate him on the way he’s doing but at the end of the day we keep him grounded and tell him he hasn’t achieved anything yet because this is literally his first year.”

While it’s still early days in the younger Alvarez’s career he has certainly put himself on the radar of a wide range of soccer fans across the continent. The USL Player of the Week in Week 9 of the regular-season after his hat trick against Saint Louis FC, Efrain has been getting national attention for his outstanding finishes that have been a major highlight for the Galaxy II so far this season.

The sacrifices made to succeed have been significant for Efrain, having first been part of the United States youth national team program before making the bold step to accept call-ups for Mexico. Last year he provided the game-winning assist for Mexico's U15 National Team against the United States in the final of the Concacaf U15 Championship, and is now making the next step toward the 2019 FIFA U17 World Cup to be held in Peru.

The change of allegiance has led to plenty of travel from Los Angeles to Mexico, and was a very difficult decision for such a young player. But his older brother and his whole family were there to support him regardless of where his international future takes him.

“Remember in the beginning he was with the United States and now he’s with Mexico and I have to say I support him,” said Carlos. “Wherever he feels happy and comfortable, and wherever he feels he’s going to succeed as a soccer player, be my guest, because at the end of the day that’s what I want for my brother. I just want what’s best for him and right now he’s showing that those sacrifices are paying off and I’m very happy for him.”

Lights FC and Los Dos are scheduled to meet this weekend at StubHub Center, but unfortunately for the brothers the family reunion on the field appears to have been put on hold with Efrain set to join camp with the Mexico U17s after appearing in Wednesday night's game against Rio Grande Valley FC for training camp ahead of the Varsseveld International Tournament.

With the teams next scheduled to meet on September 8 at Cashman Field, Carlos is hoping that reunion will still take place later this season.

“No I’m not disappointed, because at the end of the day he got the call up and he’s doing the right things and obviously that’s the bigger picture that he’s looking for,” said Carlos. “There’ll be a time when we play against each other and if it wasn’t meant to be it’s not meant to be.”