Reno romps to victory, San Antonio pulls away to book Third Round spot 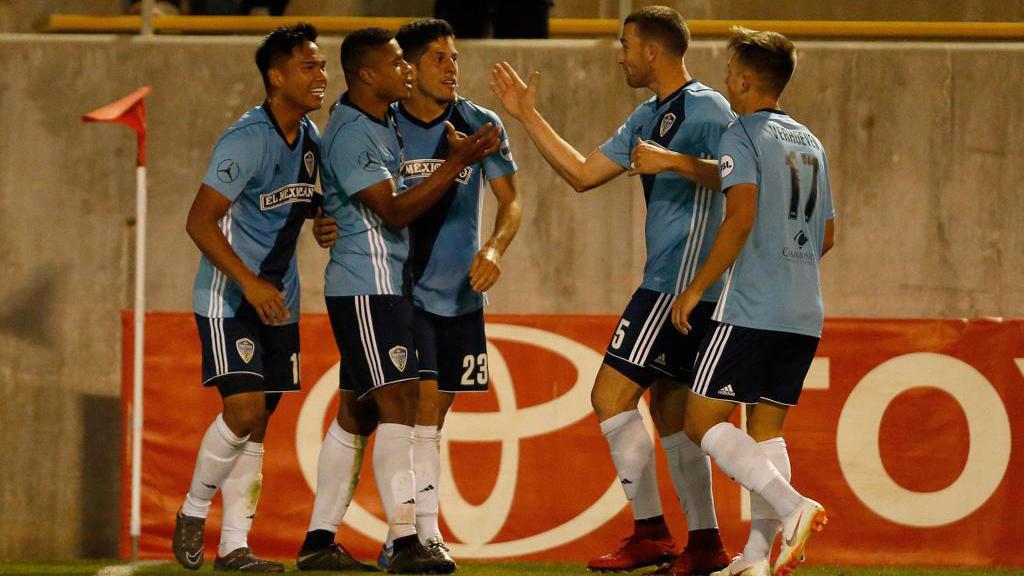 FRESNO, Calif. – Fresno FC scored twice in extra time to earn a 2-0 victory against Orange County FC on Wednesday night in the Second Round of the 2018 Lamar Hunt U.S. Open Cup at Lamonica Stadium as goals by Terran Campbell and Renato Bustamante sent the Foxes into the next round.

After the game remained scoreless through 90 minutes, the Foxes took the lead five minutes into extra time when former USL Rookie of the Year Jose Cuevas dribbled into the penalty area and laid off a pass to Campbell, who hit a first-time shot from near the penalty spot to give the Foxes the lead.

Orange County nearly hit back immediately, firing off the crossbar a minute later, but with two minutes to go in extra time Busamante blasted home from close range off an assist by Danny Barrera to book the Foxes’ spot in the Third Round.

Fresno FC had controlled possession much of regulation, and went close to taking the lead in the 36th minute when Noah Verhoeven sent in a low cross across the face of goal that slipped behind the defense and just out of the reach of several teammates. A few moments later, Cuevas fired on goal from 25 yards only to see his effort tipped over the crossbar by Orange County FC goalkeeper Hugo Gomez.

Cuevas also had a good opportunity in the 22nd minute when a handball just outside the penalty area set up a chance from a free kick that saw the attacking midfielder’s delivery go just over the head of Rodolfo. The Foxes had another attempt near the final ticks of regulation when Bustamante went down on a hard tackle from Kleyner Bejarano that drew a free kick that Cuevas shot into the wall, but the side came though when it counted in extra time to advance.

RENO 1868 FC 7, PORTLAND TIMBERS U23 3: Jerry van Ewijk scored a hat trick as 1868 FC rallied from a two-goal deficit in the first half to surge past the Premier Development League’s Timbers U23 at Greater Nevada Field to set up a clash next Wednesday with Sacramento Republic FC. Portland struck twice in the opening half, but Van Ewijk responded with goals either side of halftime to level things up. Portland again took the lead on an own goal, but after Danny Musovski scored a third for the hosts with 21 minutes to go 1868 FC cruised the rest of the way. Musovski added a second in the 73rd minute, which was followed by Van Ewijk completing his hat trick nine minutes later. Goals by Lindo Mfeka and Christian Thierjung wrapped up the victory for 1868 FC late on.

SAN ANTONIO FC 4, MIDLAND-ODESSA SOCKERS FC 0: San Antonio matched its widest margin of victory in club history as it pulled away late against the Sockers at Grande Communications Stadium in Odessa, Texas as Omar Gordon finished with a goal and assist on the night. Darnell King got things rolling for the visitors in the 33rd minute with a close-range header, but SAFC didn’t put the game away until late on when Mikey Lopez added a second with three minutes to go. Gordon then set up Maxi Rodriguez in the 90th minute before adding a goal of his own in stoppage time to set up a home tie in the Third Round.

COLORADO SPRINGS SWITCHBACKS FC 3, FC DENVER 2: The Switchbacks rallied from a halftime deficit to advance to the Third Round at Weidner Field thanks to Jordan Burt’s late penalty kick. Fernando Magallanes put Denver ahead nine minutes before the break, but the hosts hit back to take the lead on goals by Pascal Eboussi and Uriel Macias three minutes apart inside the opening 15 minutes of the second half. Denver leveled the score from the penalty spot as Cesar Castillo scored in the 77th minute, but with four minutes to go Colorado Springs was awarded a penalty kick of its own that Burt converted to clinch victory for the hosts.

FC GOLDEN STATE FORCE 4, ORANGE COUNTY SC 2: Orange County twice took the lead, but a strong second-half display by the Force sent the Premier Development League side through to the Third Round at Champions Soccer Stadium. OCSC went ahead in the 28th minute through Christian Duke, and while Golden State quickly leveled the hosts regained the lead before halftime when Thomas Enevoldsen found the net. The Force got back on level terms early in the second half from the penalty spot, however, and then goals by Samuel Goni and Pedro Fonseca saw Golden State pull away to advance to the Third Round.

NTX RAYADOS 5, OKC ENERGY FC 2: Energy FC conceded a late penalty kick in regulation and then saw their hosts run away with the game in extra time as Rayados took victory at Richland Community College in Dallas, Texas. Rayados took the lead five minutes before halftime, but back-to-back goals by Philip Rasmussen from the penalty spot and Miguel Gonzalez appeared to put Energy FC in control early in the second half. Rayados leveled in second-half stoppage time from the penalty spot, however, and then racked up three goals in the additional 30 minutes to move onto the Third Round.

FC WICHITA 4, TULSA ROUGHNECKS FC 3: Former Richmond Kickers forward Franck Tayou scored the game-winner as Wichita defeated the Roughnecks at the Hurricane Soccer & Track Stadium in Tulsa, Okla. in a wild contest that saw both sides finish with 10 men. The Roughnecks took the lead on three separate occasions, with Jhon Pirez scoring the opening two goals for the hosts before Riggs Lennon notched the third moments after Wichita had been reduced to 10 men early in the second half. Each time, Wichita hit back to level the score, and when Tulsa’s Nemanja Vukovic was sent off with three minutes to go to level the numbers, Tayou came through in the first minute of stoppage time to earn the visitors the victory and place in the next round.

SPORTING AZ FC 1 (5), PHOENIX RISING FC 1 (4): Phoenix Rising FC was eliminated in a penalty shootout as failed to hold onto a second-half lead against Sporting at Chandler-Gilbert Community College in Chandler, Ariz. Chris Cortez gave Phoenix the lead in the 64th minute, but the hosts leveled two minutes later to send the game to extra time, and eventually to a shootout, where Cortez hit the crossbar with the opening shot to put Rising FC behind after the first round. Sporting shot over with a chance to win it in the fifth round, but with the first shot of the sixth round Kody Wakasa saw his shot be partially saved and then spin off the right post and out, which allowed Sporting to convert and advance to the Third Round.