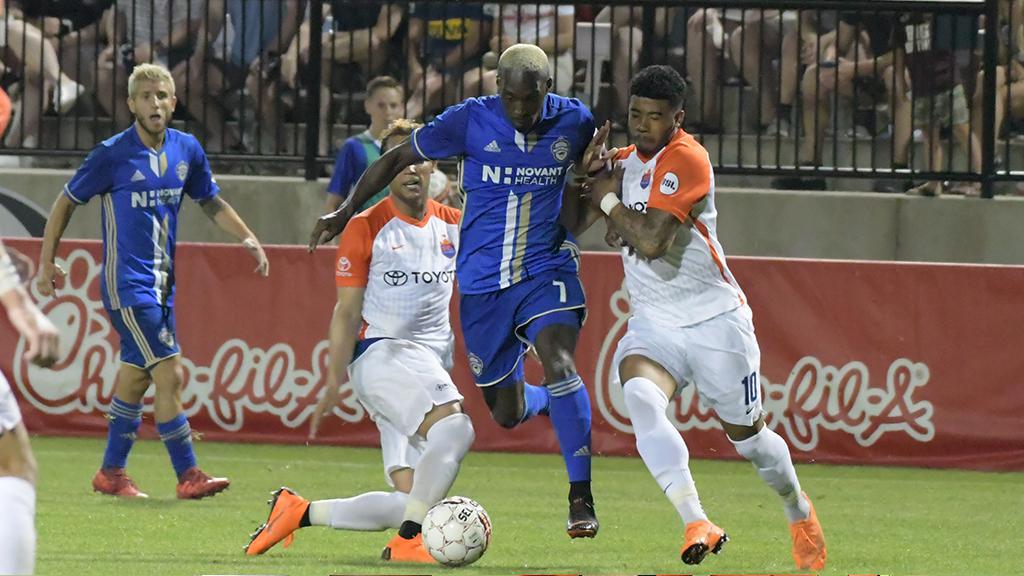 MATTHEWS, N.C. – The Charlotte Independence ended a five-game winless streak with a 4-1 victory against FC Cincinnati on Saturday night at the Sportsplex at Matthews that broke FCC’s three-game winning streak in emphatic fashion. Charlotte’s Jorge Herrera headed just over the crossbar in the third minute as the hosts made a positive start, and moments later an error by FCC goalkeeper Spencer Richey gave a chance to Cordell Cato, but the Independence midfielder sent his shot just wide of the right post. Kay Voser also went close in the 20th minute for the hosts, firing just wide of the left post before Cincinnati’s Emmanuel Ledesma forced a save by Independence goalkeeper Brandon Miller from long range, but the Independence took the lead seven minutes before halftime as Cato fired home a turning finish into the top-right corner of the net, ending a four-game scoreless drought for the Independence at 403 minutes. Charlotte doubled its lead before halftime as Yann Ekra’s low 25-yard shot picked out the right corner of the net, but Cincinnati hit back six minutes into the second half as Ledesma played in Danni Konig, who beat his marker and Miller to a through-ball and finished into the open net. The Independence restored their two-goal lead in the 57th minute, however, as Voser curled home a fine finish off Herrera’s back-heel flick at the top of the penalty area. Cincinnati almost pulled one back with 10 minutes to go, but Miller saved comfortably from Emery Welshman’s header, but Eamon Zayed’s first goal for the Independence wrapped up the victory with three minutes to go in a big win for the hosts.

Kay Voser, Charlotte Independence – Voser had a goal and assist in a tremendous display that saw him complete 56 of 61 passes and regularly look dangerous in the attacking third.