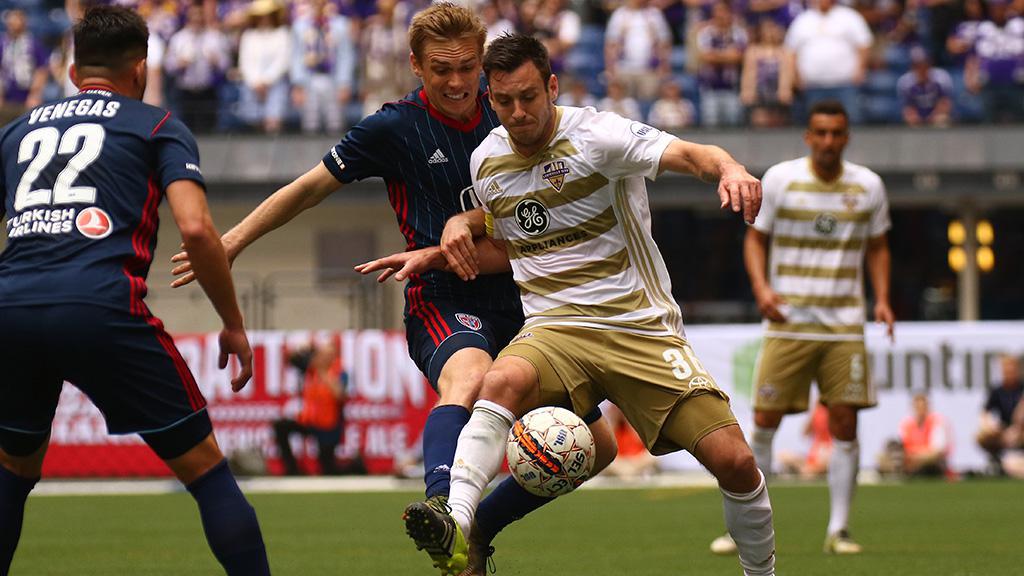 LOUISVILLE, Ky. – Louisville City FC made it deeper into a season than in its previous three before suffering its first loss this past Saturday, but the manner of the 1-0 defeat to Indy Eleven at Lucas Oil Stadium was disappointing for Head Coach James O’Connor as the side slid to second place in the USL’s Eastern Conference standings to open the second quarter of the season.

“Honestly, I think for us, looking at the level of performance, I think we were really frustrated with our own performance,” said O’Connor on Monday at his weekly press conference. “Forget everything else. The first thing we always do is look at ourselves. I think we were a little frustrated. We’ve been able to spend some time going through some things with the guys and found some very valuable lessons we can take from the game.”

While there were positive points to take from the tightly-fought contest – including limiting its hosts to only six shots total – Louisville’s first scoreless outing of the season was likely at the top of the list when it came to the disappointing aspects of the game. Louisville created 10 shots in the Indy penalty area but put only three on target as chances went awry, especially late on as the visitors sought an equalizer to Ayoze’s 78th-minute penalty kick for the hosts.

Despite losing its undefeated record, the side got back to work ahead of Sunday’s game with Nashville SC at First Tennessee Park looking forward to the second meeting between the two regional rivals. Louisville took a 2-0 victory on the opening weekend of the season as Luke Spencer and Niall McCabe scored second-half goals at Slugger Field, and with the proximity of the two cities O’Connor is expecting a similar atmosphere to the almost-8,000 fans that were present at the first meeting.

“With Nashville being at home, I’m sure they’ll have a great crowd and it’s another local derby,” he said. “It’s fantastic that we have this regional rivalry where you’ve got Indy, Cincy, and Nashville, so the rivalries we really look forward to, we’re excited, and it’s a game that we’re looking forward to.”

With Louisville’s propensity to rebound positively from defeat – the side went 5-0-1 in games following a defeat a season ago – the side should be expected to put in a sharper display in the finale to Week 9 of the regular season.

OTTAWA FINDS LATE REWARD: After the club’s early-season struggles in front of goal, and having hit the woodwork twice on Monday night, Ottawa Fury FC’s players didn’t care how it broke the deadlock against Penn FC, only that it found a way to take all three points for the first time this season.

Thanks to veteran defender Colin Falvey’s goal with three minutes to go, Fury FC got the slice of good fortune it was looking for at FNB Field as a 1-0 victory lifted the mood of the club as it headed back to Canada’s capital.

“I think we definitely had three or four much better chances than they had, so I think on the basis of that we probably, just about slightly deserved the three points,” said Falvey after the game. “I’m not too concerned with how we got them at this point, as we said, just to get those first three points was a relief for us…so happy.”

Falvey’s goal was just the third Ottawa had scored this season, with the side having been on a 271-minute scoreless streak since Cristian Portilla’s late equalizer against North Carolina FC on April 21. There was a small element of controversy to the finish as Penn appealed for a foul on goalkeeper Sean Lewis in the build-up to Falvey’s volleyed finish, but the goal pulled a large weight from the shoulders of the visitors after its trying start to 2018.

With the side now having taken four points from its past two outings after a 0-0 draw with the New York Red Bulls II last Wednesday, Head Coach Niko Popovic is hoping his side is starting to turn the corner.

“We have to keep going, keep working,” said Popovic. “We did against Red Bulls, a very good game too. So, I think this is a continuation of the work. It’s a process, we have ups and downs, but now I think we are coming to a better moment in our season.”

“I think I’m getting on a roll,” Brett told DKPittsburghSports.com after Saturday’s game. “I’ve been working real hard in practice and trying to communicate to the guys so we understand each other. The first goal, Kevin went down the flank and whipped it in and I realized where the goalkeeper was and I just put it in the corner. Second goal, we made a few passes and I pulled the two center backs towards me. I realized Kevin [Kerr] was playing in the space, so I played it in the space and Kevin just finished it off.”

Brett is now tied for second in the USL Golden Boot race behind the Swope Park Rangers’ Kharlton Belmar but is also starting to link up well with his teammates to sit with seven key passes, good for third on the team behind Kevin Kerr and Christiano Francois. Pittsburgh will get a test of its undefeated record this Friday when Indy Eleven visits, but Brett is looking like a man the Eleven will need to key on in what should be a tight contest between the playoff contenders.

BREAKTHROUGH KEY IN BETHLEHEM: There had been a lot to like about the way Bethlehem Steel FC had been playing since its opening game of the season, but by breaking a five-game winless drought on Sunday in a 3-1 win against the Richmond Kickers the final piece of the puzzle finally fell into place to boost the club ahead of a key stretch of games.

“We are going through a stretch where we were playing good but weren’t getting the scores that we needed, and I think these three points really help us going forward,” said midfielder Santi Moar. “Now we go with confidence to Charleston, which we know will be a tough game, but we have to try and do the same thing and hopefully, the wins will keep coming.”

Bethlehem had scored three goals in its previous five games going into Sunday, but with Moar on song in his fourth start of the season things clicked in front of goals for the hosts at Goodman Stadium. Steel FC’s margin of victory could have been wider as the side hit the woodwork three times in addition to its three goals, but Head Coach Brendan Burke was hopeful the performance signaled a shift in the right direction before a tough upcoming run.

"We’re in the mix, we’re in there throwing punches with everybody,” said Burke. “That’s where we were last year and I’m glad we’re kinda at the same point this year. In reality, we should be another win or two on the board already and we are coming through a really difficult part of the schedule.

“The next seven-day stretch where we have three games with Charleston, New York and Indy will be a vicious one and hopefully, we can take six points out of those three games. That will be the goal for us and our focus after tonight will be that.”