STLFC supporters group has raised more than $55,000 for local charities in three-plus years of work 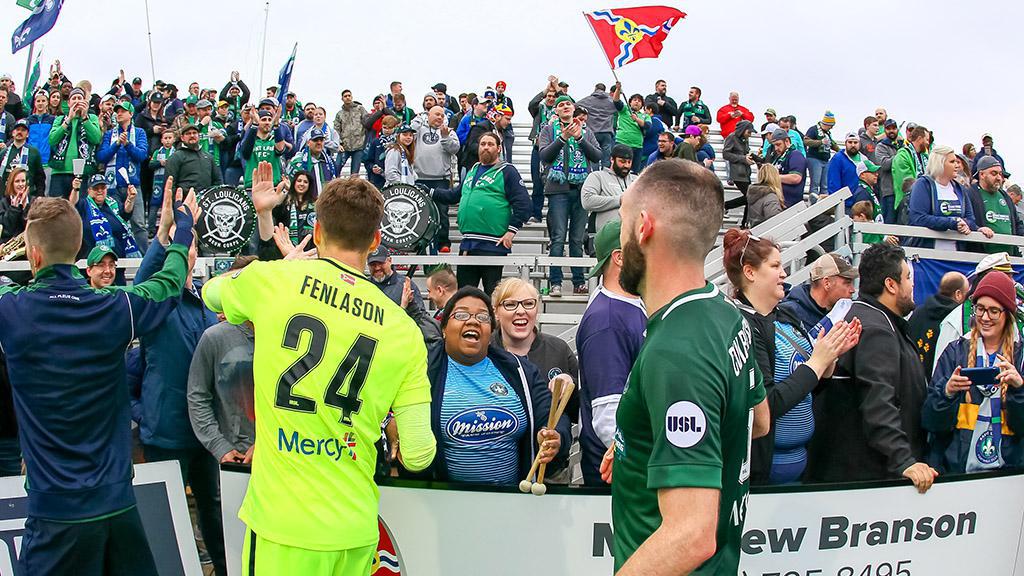 ST. LOUIS, Mo. – Supporters groups form a big part of the USL experience, lending their voices to create an impressive atmosphere that keeps other fans coming back for more. But beyond that those supporters groups also form an important part of their communities, an aspect of fandom that the St. Louligans, who can be found leading the charge every home game and regularly on the road for Saint Louis FC, take very seriously.

“When STLFC started, the owners Jim Kavanaugh and Tom Strunk stressed to the community that the club is about giving back,” said St. Louligans founding member Mitch Morice. “It's influenced us heavily; we already did a charity game on the first Saturday after New Year’s Eve for the Food Bank, where we played the STL chapter of American Outlaws. [St. Louligans founding member] Brad DeMunbrun came up with the idea of a ticket exchange at the merch table at STLFC games, where if you had an extra ticket you could drop it off.  And if you needed a ticket, throw some money into the charity bucket.  That money then went to the charity we picked; almost always a local charity or a national charity with local ties.”

That giving back has led to some incredible work from the group, which last year donated $21,144 to charity, bringing the total in three years of work to $44,275. While that's impressive, this year is going to be the group's biggest yet.

“The second year, we started planning out the charities for each home game, all with a personal tie to it,” said Morice. “Our good friend Casey Blick died of colorectal cancer; the first game we do for him and made an $1,800 donation in his name this year. It's always personal to us. Counting the team's donation, we're at just under $14,000 already this year.”

This week sees Saint Louis FC return home to take on the Portland Timbers 2 this Saturday night at Toyota Stadium – Saint Louis (8:30 p.m. ET | Match Center | ESPN+) and with it return the St. Louligans' charitable efforts. This week the group's work will take on another dimension as the Wil’s Warriors campaign continues.

“Wil Ohler's mom sent us a message. We were already aware of Wil's battle with Leukemia through the team and one of our members,” said Morice. “Wil's struggle is heartbreaking, but the kid is amazing.  When he's battling this, he comes up with the idea of getting 100 soccer balls for his ‘cancerversary’ on May 18, that he can donate to kids that are battling cancer.  A 16-year-old, fighting for his life, thinks of other kids, that’s amazing.”

That idea of getting 100 balls has grown exponentially, with 400 balls already collected. Donations have been flying in, from organizations like Select, official match ball provider to the USL, and Saint Louis FC both offering 25 balls. Even opposing teams have been sending donations, with OKC Energy FC players joining in the effort, and the Missouri Youth Soccer Association pledging 100 on its own.

The collection will continue on Saturday, the last home game before the target date and the St. Louligans are encouraging fans to bring new balls to their tailgate ahead of the match as they aim for a new target of 800 that the group hopes to be able to put toward another good cause.